“For those people, Den is in fact as important as food”

Starting early last August, a renowned volunteer and Russian journalist Anna Dombrovska began to deliver 5,000 copies of Den to the east on a weekly basis. It is a huge amount of work for a media volunteer. Den already wrote that since last July Anna had delivered 9,000 copies of Visti Donbasu (The Donbas News) and 1,000 copies of Den to the inhabitants of towns and villages along the front line. Since last month, thanks to the help in delivery from the Charitable Foundation in Support of the Newspaper Den’s Initiatives, the artistic association MuzBat (Music Battalion), and her efforts, the inhabitants of the eastern region get another 5,000 copies of our papers weekly free of charge. This is not the limit. According to Dombrovska, the lack of papers does not allow to include several more towns and villages along the front line into their charitable civic press delivery project. To expand involvement and increase the circulation of the delivered papers, on her Facebook page Dombrovska announced a campaign to raise funds.

What is the delivery route, how do the readers respond? Who and why offers financial support to Dombrovska donating their money? And why is it first of all Russians who join the campaign against Russian propaganda in the east of Ukraine? We discussed this with Anna DOMBROVSKA, who visited Den/The Day’s editorial office during her recent trip to the capital.

“Now Den is delivered to a hundred delivery points in the east, from Mariinka to Toretsk,” explains Dombrovska. “To describe our route in more detail, I would say that from Mariinka we go to Krasnohorivka, Pervomaisk, and Pisky. After that to Avdiivka and Kamianka, the closest village to the front with only a hundred of inhabitants. You see, there are only 800 meters between Kamianka and the front line, and the villages farther ahead are occupied. But this hundred people, who regularly get bread and newspapers from us, are incredibly grateful. They enjoy reading Ukrainian press and say that this is in fact their only means of communication with Ukraine. The next destination in our conventional route is Verkhniotoretske. By the way, it is an important village as a part of it is under occupation. You must understand that the papers we deliver go to the occupied territory. It is very important. People read them, discuss, and share impressions. In fact, they have gotten an opportunity to receive information from Ukraine in the conditions of occupation. Moreover, it is a quality newspaper which you can read and pass on to another. Further, we bring papers to Novhorodske and Toretsk. 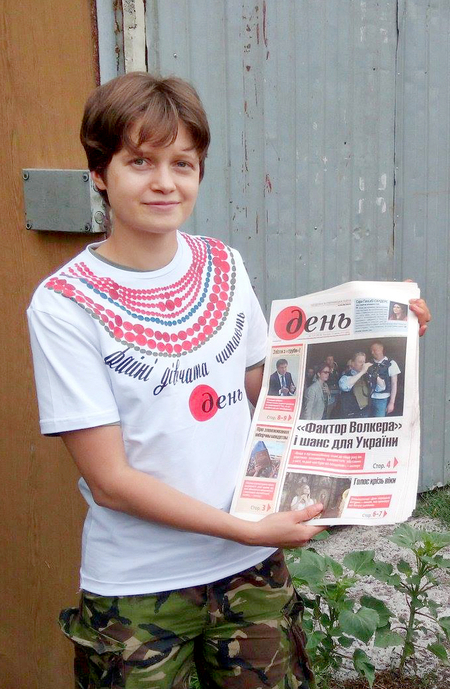 “Unfortunately, at present we cannot deliver more than a 100 copies to Toretsk and Novhorodske, because even a 5,000 package is not enough. There are several more villages close to our route which are not completely involved in the delivery project. These villages have at least 30 press delivery locations. Which is why in October we are planning to try and raise money for 7,000 copies of Den. When we hand out the papers and see the readers’ reaction, we understand that this is the right kind of humanitarian aid which they need very much. For those people, Den is in fact as important as food. During our last mission in Krasnohorivka a woman came up and asked a couple of copies of Den. She knows that we also deliver several local periodicals, yet she was interested in nothing else but Den: it is better than watching news on TV. Indeed, you offer such a qualitatively different level of journalism, so different from the kind available to the local population, that people suffer from a sort of information famine. In fact, thanks to you they can see an objective picture of the developments in Ukraine and abroad. It is no propaganda, it is a quality Ukrainian newspaper. Here you can find a lot of materials about society, politics, international developments, and the readers in the east particularly value the rubrics on culture and history.

“That is why out of all nationwide media we chose Den, and we are going to continue delivering it and enlarge the circulation. Sometimes we hear that it is not doable, spreading so many copies. My answer is simple. How to deliver such a number of papers? You need to wake up at 6 a.m., load the papers, drive from Mariinka to Krasnohorivka and come back. Then you take another load and repeat the route. You never return home before 8 p.m. By the way, we also deliver bread and other essentials.” 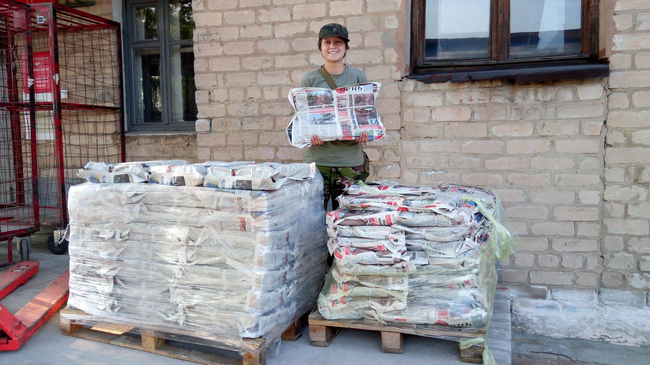 You raise money for your media volunteering project first of all via your Facebook page. Who are the people who support you on a regular basis? Which countries do they come from?

“You know, being Russian I find it very important that a large part of this money I really get from Russia, in roubles. I am convinced that this is very important for those Russians themselves who find it necessary to counter Russian propaganda at least in this way, by donating for dissemination of quality Ukrainian press in the ATO zone. They help in the way they can. In fact, our original idea was to fight Russian propaganda in the east of Ukraine. And first of all it would really be good if in this campaign we were supported more by Russians themselves, citizens of the aggressor nation. And this is what is happening. These people do not accept Putin’s policy, they are against his media and their ‘information menu.’ That is why they help. Some Russians write that we have long been for them not only an opportunity to counter propaganda, but also their direct duty. Even a poor person can transfer 50 rubles (a rough equivalent of 50 hryvnias) and buy 20 copies of a paper.

“It pleases me very much that Russian journalist Arkadii Babchenko supported our initiative. Due to his posts in social networks we were able to expand the Russian audience of our volunteering project. He has helped us a lot several times already, without hesitation. The other day we told him that we intend to increase the circulation of Den, and he was very supportive of the idea. He says it is of major importance that it is Russians who help.

“The list of countries from which we receive donations includes Ukraine, Russia, the US, Canada, Israel, and the EU, including the Baltic States. Our donors are ordinary people, not public persons. And they make small donations. We have a group of people who try regularly and systematically transfer money for our cause, as much as their means allow them. Some of them I have already met personally, with others I have contact via the internet. There is a retired lady who regularly makes transfers of 3,000 roubles, and she lives in Magadan. She has been helping us constantly since 2014.

“Sometimes the fund raising campaign slows down, but sometimes we go faster than we expected. For instance, recently the abovementioned Russian journalist Babchenko helped us considerably, and we were able to promptly raise money to repair an ambulance. We came to the Galician Synagogue in Kyiv where Babchenko held a meeting with his readers. The entrance fee was a donation starting from 100 hryvnias. At the end of the meeting Babchenko said he would donate all this money to us because he knew that we needed it at that particular moment. It was a sum of almost 6,000 hryvnias.” 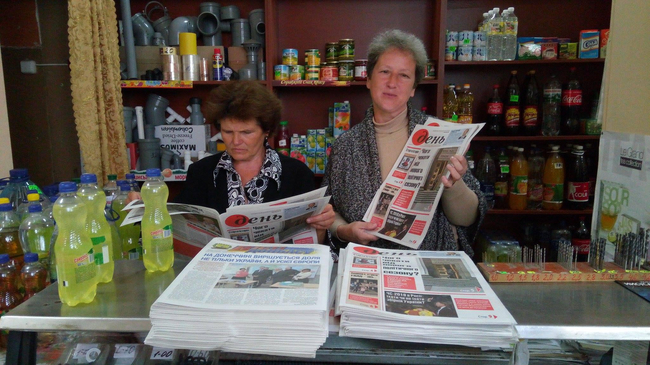 Your volunteering activities, so important for Ukraine, will hardly go unnoticed by the Russian security services.

“I guess they won’t. But I only intend to return to Russia after the victory over the Putin regime. Maybe we are really being closely watched there, but as long as the incumbent regime remains in power, I am not going back to Russia. I have tried to fight it there, I took part in rallies and public actions, in particular, the Peace March of September 21, 2014, together with 50,000 people. Did this help stop the war? No, unfortunately, it did not. Russian government showed they did not care. They ignore the people’s opinion. So, I decided that if I cannot fight there, I will try to be as useful as possible here, in Ukraine, near the front line.”

Den’s office has given you books from its Library series for the inhabitants of the eastern region. Where are you going to deliver them? What is the situation like in the ATO zone with public libraries?

“Indeed, we are grateful to Den’s editor-in-chief Larysa Ivshyna for the books and Route No. 1, we will surely distribute them to the readers in the east. In fact, we have no time to closely monitor the situation with libraries there. But what we do know is that libraries and schools do need high quality literature. When in the past years MuzBat brought books to the east (in particular, your ‘Subversive Literature’ and ‘Armor-Piercing Political Writing’ series), they were gladly received at libraries, and read from cover to cover. The books that Ms. Ivshyna handed over to us when we met (in particular, Catastrophe and Triumph. The Stories of Ukrainian Heroes; “The Trap,” or A Case without a Statute of Limitations; Ukraine Incognita. TOP 25, and others) will go to the village of Novobakhmutivka near Yasynuvata in Donetsk oblast. By the way, in that village we met a math teacher who asked us for some exhibits for the school’s local history museum. In fact, she asked us for some shell fragments or something like that. We found miners who cleared their village from land mines and asked for fragments that came from nowhere other than the outskirts of that particular village. These deadly fragments will become a real exhibit, part of the contemporary history of the region. It is just a little story from a little village, but deserves to be known and respected. In essence, it is a fragment of contemporary history of entire Ukraine. Den’s books on historical themes will be part of important humanitarian and enlightenment support in that particular region.”

P.S. Anna, a big “thank you” on behalf of the entire editorial board!