From Ukraine – for all people of the planet

About a child prodigy from the Vinnytsia region who received job offers from leading international IT companies, but still opted to come home
Olesia Shutkevych

For residents of the small town of Lypovets, the Vinnytsia region, Maksym Bevza is a true legend. He is an example for his former school’s students, and his successes are passed down to each successive class. The lad showed brilliant results in the External Independent Evaluation (EIE), having scored 200 points in physics and mathematics and 194 in the Ukrainian language. Knowledge opened up fantastic opportunities to him. He chose to study at one of the most prestigious universities and became a highly sought-after employee for the best IT companies in the world. However, after a few internships abroad, Bevza returned to Ukraine. Now, he says, he has a dream job that allows him to combine science and the IT, and most importantly, achieve complete self-fulfillment.

“At school I was actively involved in the science Olympiad movement, participated in competitions at different le­vels on several occasions. When attending grade 11, I won the first place in computer science, physics, and astronomy, the second one in mathematics, and the third one in economics. That is, I held five prize positions at the regional Olympiads. It was my father who instilled in me the love for the exact sciences, as he is a physicist by training and has had programming as a hobby throughout his life. It was he who started to train me when I was 10, and I entered my first Olympiad in computer science before I studied it at school. I do not remember if I won a prize position then, but it captivated me. Therefore, it is my dad who gave me an impetus to start programming, although now I have already overtaken him by a large margin,” Bevza told us with a smile.

After finishing school and receiving brilliant results at the EIE, Bevza had every Ukrainian university offering a place to him. He chose the one that he had long dreamed about – Taras Shevchenko National University of Kyiv. He admits that had he not worked to improve his marks and win the Olympiads, he would have had no realistic chance to enter the university, since admissions were insanely competitive.

“During my first and second years, I continued to take part in the Olympiads, only competing with college students now. These intellectual competitions help to structure one’s knowledge and quickly navigate unknown situations. We had to work as a team, and this experience was also useful. After the second year, I went abroad for my first internship. Overall, I had four of them – thrice with Google and once with Facebook,” Bevza continued. “The internships enabled me to practically apply my skills and abilities. That is, I could develop a specific product, which allowed one to feel how the IT professionals work. The first job offer came from Facebook after the third year, followed by another from Google. But at that moment, I still did not understand what I really wanted to do, because I was still studying and interested in not just the development of IT products, but precisely its scientific component.” 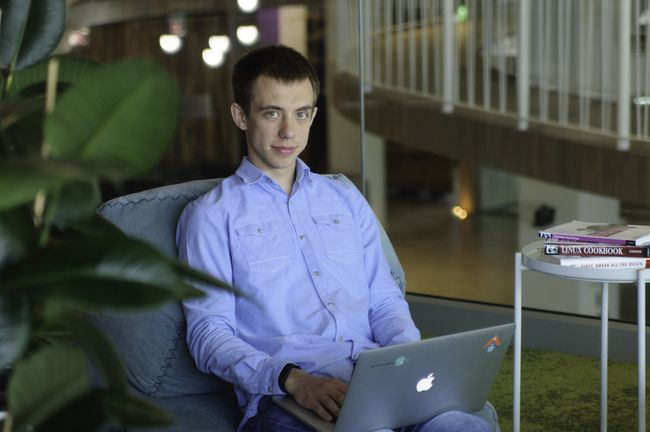 After graduating with a master’s degree, Bevza has found a job that allows him to combine science and the IT. He works for a Ukrainian company that develops innovative IT products in the field of artificial intelligence and machine learning. Bevza himself works on improving a globally popular service for checking English spelling, in other words, he creates algorithms that prevent us from making mistakes when writing in English. The company is founded by Ukrainians, conditions and compensation are as good as beyond the ocean. Bevza says that the comfort of employees and creative freedom are the top priorities there: they can work or sing, whatever suits them best. The main thing is to believe in what you do, then you will work in good faith and comply with deadlines.

“Had I stayed abroad, I would have been one of a thousand of employees, and my contribution to the overall effort would have been one thousandth. In the company for which I work today, we have approximately 150 people. That is, my contribution is one hundred and fiftieth, and this increases my responsibility manifold, because my products are more valuable and in demand with people throughout the planet,” Bevza summed up. “Now Ukraine has a unique chance to become an active player in the IT market. Ukrainian specialists are very competitive, and because of this we have the supply, demand, and popularity of this profession. But as for those who dream of succeeding in this field, the first steps must be taken while still at school, because it is then that you have a lot of free time that needs to be used well. As you sow, so shall you reap.”