“War becomes the backdrop of a certain story”

Four hundred frames on a black-and-white film and 40 polaroids is the overall result of Oles’ work in the Avdiivka industrial zone, the most dangerous ATO area, in October this year. It took the photographer six months to receive permission for this trip, even though he has broad experience in working on the frontline. As a matter of fact, Oles was an Azov battalion soldier and took part in the liberation of Mariupol in 2014. He used to make reportages from Donetsk airport, Shyrokine, and Debaltseve. Two years ago, Oles described some of those trips in Den (“A Man with a Photo Camera and... a Grenade Launcher” in No. 217, November 18, 2014). Today, Oles’ main work is not journalism but it has something to do with the military – he is the marketing manager at the newly-established AXIOS Center of Practical Help to Defenders of Ukraine, which chiefly deals with the job placement of demobilized ATO soldiers.

Before the interview, Oles drops in at the post office to send the promised Avdiivka photographs to soldiers. He gifts one to me – it pictures a man standing in the hangar’s gateway between the knocked-out window and the wall cut up by shell fragments – these holes look like stars. “It is not written here that it is the industrial zone, but I think it conveys the spirit of what is going on there,” Oles says. Photographing with a film camera or a Polaroid in a hot spot is a risk that borders on madness. It is difficult physically and technically, and the result is almost unpredictable. So, to begin with, we discuss what made Oles hit upon this idea. 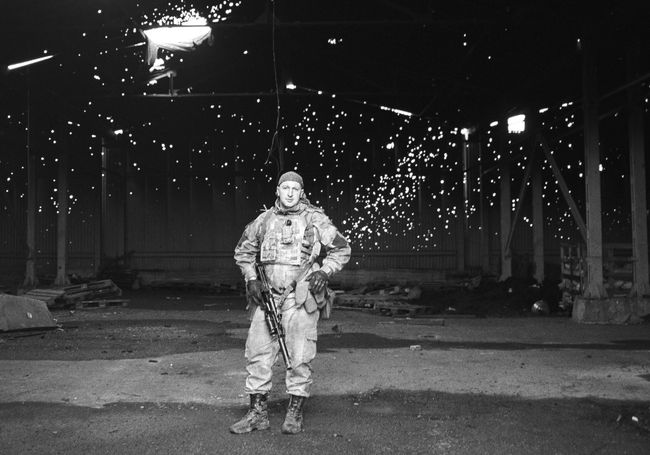 FIRST, A BATTLE WITH BUREAUCRACY

“Military journalists haven’t been using cameras of the type I have for 20-30 years. One of my cameras is of the 1990s-2000s, another, Leica M3, is of 1955. Reportages with a standard camera are essentially the record of reality. I wanted to make an art project where there is no place for art.

“It took me a long time to prepare for a trip to Avdiivka. In the last week before the departure, I leafed through The Polaroid Book, which included a collection of the best Polaroid snapshots, and wondered if I could do the same job. I bought an old camera – some friends had brought several Polaroids from Poland just in the last minute. I decided to use this camera along with the others.

“There were difficult weather conditions in the Avdiivka industrial zone. This plus the overall situation produced some technical and artistic effects. Thematically, I was trying to portray soldiers and the situation they were in. I was doing blurred faces so that the portraits did not personify only one specific person. All the more so that soldiers don’t want their relatives to see them. Two thirds of them lie about their whereabouts so that nobody gets nervous.”

It took you six months to get to Avdiivka. Why so long?

“I used to do my previous reportages as follows: either I served at a certain place and prepared a post factum report or there was an opportunity to go to the battle area, for example, with a volunteer mission. So it has been easier before. 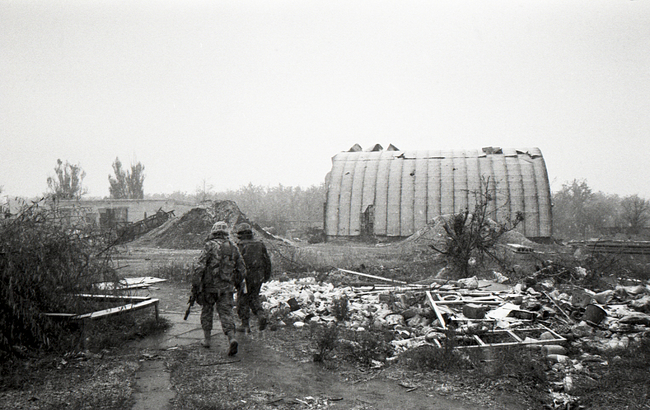 “It took me six months now to get permission perhaps because I hadn’t traveled anywhere for a long time and I didn’t know well that segment of the frontline. And when I was arranging for filming in the industrial zone, I came across a mammoth bureaucratic machine in our army. In the six months of raising funds and developing the idea, I went though all kinds of red tape that boiled down to the principle ‘bring me a slip of paper that doesn’t exist.’ This lasted until the unit stationed in the industrial zone was replaced – now it is the 72nd Brigade of the Armed Forces of Ukraine. They are sound-minded people, and as I’d already been known and had recommendations from volunteers and the military, I was allowed to stay there for four days. All this, including traveling time, took a week. This was enough for me to more or less look into and make an ample reportage on the situation and, at the same time, to carry out a creative project.”

“MY LEICA IS AN EFFECTIVE WAY TO ESTABLISH CONTACT”

Did you get on with the servicemen?

“Oh yes. Soldiers were told that I was not doing a pleasure ride but performing a necessary function. Whenever I come over, I explain why and what for I am doing this. This helps establish contact. This time, as Kyiv and other big cities have somewhat forgotten about the war, people were agreeing very quickly to be photographed, and they were putting no obstacles in my way.

“Incidentally, my Leica is an effective way to establish contact with soldiers. The same applies to the Polaroid. When soldiers see it, they say: ‘Look, my family got one like this. Let’s have our pictures taken and see the result.’”

What kind of people are stationed in the Avdiivka industrial zone now?

“They are contract soldiers. Some of them signed a contract for a second time, others used to be conscripts who then decided to be professional soldiers. People are coming back, for they want to defend their Fatherland – this time under a contract, for this provides certain social guarantees and good pay. Besides, in a time of peace, there may be fierce competition, low wages, or other unfavorable circumstances, which, naturally, creates a desire to get back.”

“NOBODY VISITS THE FRONTLINE NOW”

Have journalists improved their skill in more than two years of ATO? What do they still lack?

“Firstly, nobody has understood anything. Secondly, the number of business trips to those places has dropped sharply. In general, people who visit the east once in six months or a year are even physically unable to understand anything. Accordingly, the quality of reportages is falling. People just don’t know how to work there. Nobody blames anybody for this, but the situation is like this. 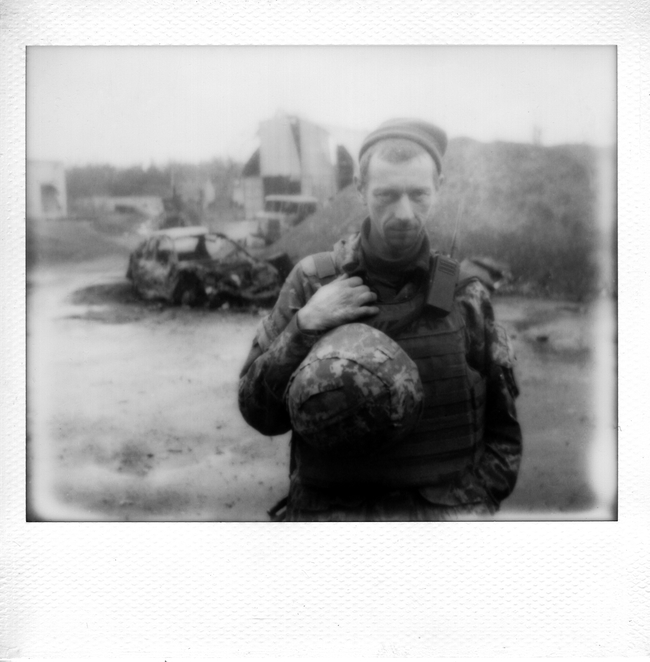 “The reaction of the military to the media is worse now. It’s a vicious circle: journalists are disliked because they film badly, and they film badly because they are not liked, not waited for, and not allowed to work. You will only come to see things better if you win the trust of the military. I’ve managed to squeeze into this circle, all the more so that I’ve also seen service. I knew from the very beginning the attitudes of people and the way I should speak to them.

“Nobody visits the frontline now because accents are different, and nobody could care less. To show the right picture of what is going on there, one must explore the subject more deeply. But this requires heavier budgets. To tell about the events near Marinka, one must spend a week or two there, for which our media has no money. This results in the inferior quality and quantity of reports.

“But nothing will change unless the state begins to pursue a completely different informational policy and launches a comprehensive media-oriented program. The only well-organized procedure now is that of receiving an ATO press card. I think there must be some kind of public initiative to work out a normal mechanism of dealing with journalists.”

Donetsk airport has become a symbol of steadfastness. And what will the industrial zone embody?

“People paid attention to those events and the airport’s heroic defenders at the right time, and they became aware of what it embodies. This became also possible thanks to those who have done good projects about the airport, particularly Serhii Loiko. But almost nobody knows about the 81st Ukrainian Army Brigade at Luhansk airport in 2014. Who knows about a Luhansk couple that carried food to the Ukrainian military, but separatists caught and shot them? There were some explosions of Facebook reposts, but then… In general, if you want to devalue something, let it go to Facebook. People are not used to regarding what is in the internet as something noteworthy. 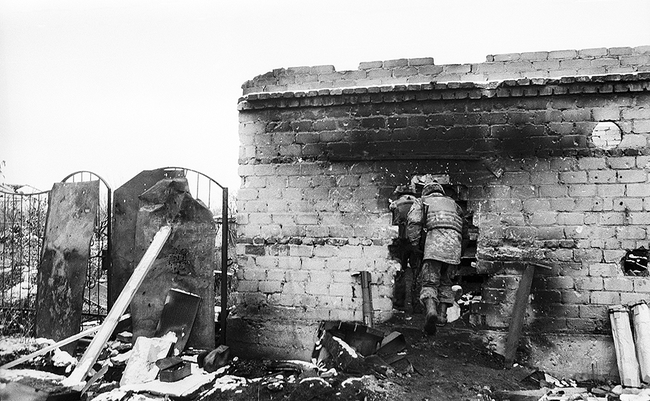 “In terms of information, the Avdiivka industrial zone story began in the same way as that of Donetsk airport. Something is going on there, bad statistics is coming, there are some wounded soldiers, fierce battles are raging, but nobody is allowed to go there, and we know nothing for sure – in principle, almost nobody wants to know. Society cannot in fact see the military now. They can see student officers in a new uniform and people who serve at the headquarters, but not those at the front. Things may go so far that we will only see uniformed ‘alkies’ at the railways station.”

Are you satisfied with your work in Avdiivka?

“Yes, I was doing there what I considered the most interesting. I always try to get into an inaccessible place. The Avdiivka industrial zone is a topical unexplored subject. I want to go on, for even one in the field is a warrior. I want to make something integrative out of these materials – for both, the exhibit and the book. I hope I’ll be able to photograph on a higher informational scale.

“I am eager to stage an exhibit. I want these pictures to be printed large and ‘the abyss to look at man.’ I want this exhibit to revive people’s interest in the events depicted there. The people in the industrial zone are heroes who risk their lives daily. It is really the First World War there – everything is gray and cut up, with no trees higher than one and a half meters. And it thunders at night. 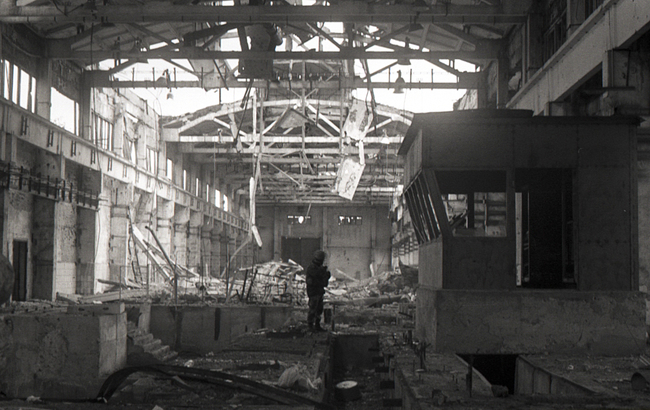 “We need photo projects on war. One spot report or one photo gives nothing. But a high-quality project is like a good film. War becomes the backdrop of a certain story. So people will be interested again in these events.

“I usually look over old projects – for example, works by Henry Hewitt, Eddie Adams, Tim Page, and Philip Jones Griffiths on the Vietnam war. These unique pictures are still being reprinted today. You can see that these people spent months in that war. I’d like to emulate them.”