“You need to do even more”

This year Ukraine is celebrating Europe Day for the fourth time, and this is an occasion for both celebration and summing up the new stage of our relations with the EU, which started on September 1, 2017. And it was that latter activity that was dealt with at a roundtable themed “Ukraine’s European Choice after the Revolution of Dignity: Opportunities and Problems,” which was organized by the Institute for Foreign Policy Studies, the Directorate-General for Rendering Services to Diplomatic Missions, and Kyiv Cooperative Institute of Business and Law.

In his short speech, Head of the EU Delegation to Ukraine Hugues Mingarelli noted that in the four years since the Maidan, more reforms had been implemented in Ukraine than during the entire preceding 23 years of independence.

According to him, the cabinet of Volodymyr Hroisman began a series of reforms last year, in particular in the energy sector as well as pension and education reforms, and the Verkhovna Rada passed a privatization law a few months ago that will accelerate economic growth. Mingarelli also believes that Ukraine has enormous potential in the land reform sector. “There has been a lot of work done in Ukraine, but even more needs to be done,” the diplomat stressed.

And such outstanding tasks, he went on to say, included bolstering the rule of law and in particular the Ukrainian government’s commitment to create the Anticorruption Court while taking into account the recommendations of the Venice Commission.

Mingarelli also believes that the current 2.5 percent annual GDP growth is not sufficient to improve the economic situation in the country. In his opinion, this figure should rather be 5-6 percent. And this required foreign investment that would come to Ukraine if investors are respected and enjoy proper conditions, which meant fighting corruption and maintaining the rule of law, the diplomat stressed.

The head of the EU Delegation in Ukraine drew attention to the fact that the second component of the Association Agreement, called the Deep and Comprehensive Free Trade Area, allowed Ukrainian producers to move into the EU market, which was very important. Consequently, he added, the main challenge now was to harmonize Ukrainian legislation with the European one in most sectors of the nation’s economy.

Mingarelli reminded that granting visa-free travel to Ukrainians was preceded by major reforms in many spheres and “now we need to be sure that there will be no rollback on targets.”

“MOST UKRAINIANS PERCEIVE EUROPEAN INTEGRATION AS STANDARDS TO BE ATTAINED”

Commenting on the reservations expressed by the European diplomat, chairman of the board of the Institute for Economic Research and Policy Consulting Ihor Burakovskyi admitted that he was not sure about the irreversibility of reforms. In his speech, he noted that “the European idea is dominant in all regions, but the pro-European sentiment is not stable, in other words, European integration has not become a guiding light.”

According to him, to a certain extent this is due to the disappointment of citizens with political forces, and also reflects propaganda broadcasts on the main TV channels. “Most Ukrainians perceive the EU and European integration as standards to be attained,” Burakovskyi emphasized.

According to the expert, another problem regarding the realization of European integration aspirations lies in the existence of a high level of distrust for state institutions.

“The EU has become Ukraine’s largest trading partner and, moreover, significant changes have taken place in our exports, and the share of processed products has increased,” Burakovskyi said. However, he added, “the success of Ukrainian exports to the EU depends on how we fit into industrial supply chains.”

According to him, despite many reforms being done, Ukraine is too slow in improving its customs service, and not so much because of bribery, but because of the fact that our border clearance expenses are higher than in the EU, while the supply chain system does not tolerate delays.

Pointing out that the government has established a number of departments and offices for cooperation with the EU, Mr. Burakovskyi expressed his desire that they cooperate effectively and that there was more coordination and no competition between different executive agencies.

The expert drew attention to such a fundamental thing as the formation of a pool of specialists for cooperating with the EU in the field of European law. “This is a time bomb, since if we do not have enough specialists, it will hinder our advance on the European course,” said the chairman of the board of the Institute for Economic Research and Policy Consulting. 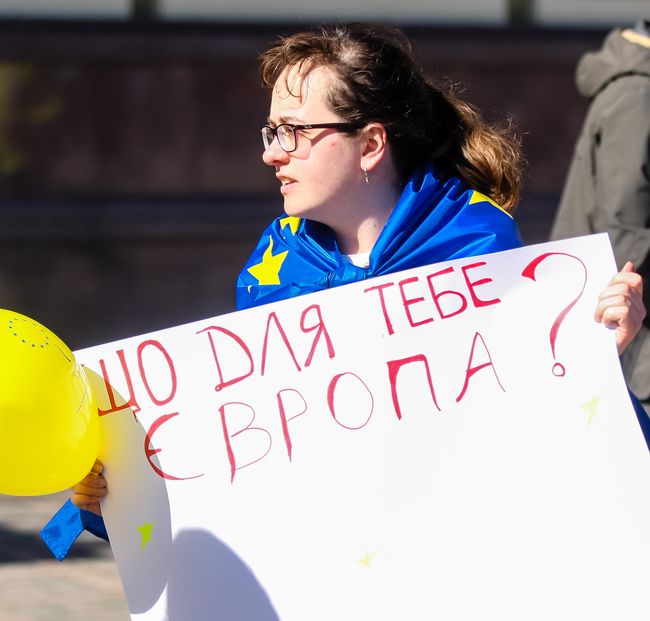 PLACARD READS: “WHAT DOES EUROPE MEAN TO YOU?” / Photo by Mykola TYMCHENKO, The Day

He also noted that the institutional capacity to use EU technical assistance was low, while it included not only money, but also experience and opportunities to obtain the necessary information.

“We must also understand that even the most successful reforms are not done only for today and tomorrow, but also for the future,” said the expert.

In his view, the EU policy on Ukraine should be based on three “S”: Still engage, Stay critical, and Stay patient.

And it was important, he added, that European integration become a tool for the development of a project called the EU.

Head of the EU-Ukraine Customs and Financial Co-operation Unit of the Cabinet Office for European and Euro-Atlantic Integration at the Secretariat of the Cabinet of Ministers of Ukraine Maryna Nelina emphasized in her speech that the Association Agreement was unprecedented in its volume and structure and described the specific steps taken by the cabinet for the implementation of this document.

She said that at the end of last year, the cabinet approved a roadmap for the implementation of the Association Agreement, and in 2017, 23 systemically important laws were passed to implement the agreement, covering the energy sector, safety and quality of food products, and the introduction of international accounting and auditing standards.

According to her, Ukraine has started official negotiations on an Agreement on Conformity Assessment and Acceptance of Industrial Products between Ukraine and the EU (ACAA agreement). This would mean the final break with the Soviet standards, while the transition of Ukrainian technology to the European standards would liberalize access to the European market, she stressed.

Another step in this direction was the ratification of an agreement on the origin of goods with the EU and the accession of Ukraine to the European Program for the Competitiveness of Small and Medium-Sized Enterprises, Nelina said.

In addition, she believes that consolidation of all political actors in implementing the Association Agreement is of great importance, and to ensure that our efforts are successful, we need to highlight specific priorities and form a shared road map for the executive and the legislature.

According to the official, the customs reform will unfold in 2018 in accordance with the transit system prepared by the Ministry of Finance, which will accelerate and secure the trade of Ukraine with the EU.

“This is important,” she stressed, “not only for Ukraine, but also for the EU, because our transit system which we share with the European community can expand eastward, so Ukraine can serve as a valuable partner.”