For the first time in history, the incumbent of the White House met with the leader of North Korea
Natalia Pushkaruk

The meeting between US Pre­si­dent Donald Trump and North Korean leader Kim Jong-un, which had faced a real threat of disruption because of North Korea’s careless statements, did take place in Singapore at 9 a.m. local time (4 a.m. in Kyiv) on June 12. For the first time in history, the incumbent of the White House met with the leader of North Korea after seven decades of hostility that began at the end of the Korean War.

The Trump-Kim one-on-one talks lasted exactly 38 minutes and were followed by extended negotiations involving advisers and a working lunch, the CNN reports. In the interval between the sessions, President Trump shared his impressions with reporters, saying that the meeting was going “very, very good.” “We have an excellent relationship,” he said. When questioned by journalists whether the DPRK would relinquish its nuclear weapons, Kim did not answer. “Well, it was not easy to get here. The past worked as fetters on our limbs, and the old prejudices and practices worked as obstacles on our way forward. But we overcame all of them, and we are here today,” he said.

Following the summit, the leaders signed an agreement in which they committed to making joint efforts for denuclearization of the Korean Peninsula in exchange for security guarantees from the US, the DW writes. The Politico media outlet has published the full text of this four-point document. Firstly, the US and the DPRK have committed themselves to establishing new relations “in accordance with the desire of the peoples of the two countries for peace and prosperity.” Secondly, the two countries will join their efforts to build a lasting and stable peace regime on the peninsula. Thirdly, reaffirming the April 27, 2018 Panmunjom Declaration, the DPRK commits to work toward complete denuclearization. Fourthly, the parties commit to repatriation of perished POWs’ remains. Trump announced that denuclearization on the Korean peninsula would begin “very soon.”

The leader of North Korea stressed that this was a historical document and that “the world will see major change.” The US president, in turn, said that relations with that nation would change and that “people will be amazed and happy.”

Interestingly, the North Korean state TV channel KCNA broadcast the summit live, even though footage of such events is usually shown to North Koreans only a few days after they occur.

However, the lightning speed with which North Korean leader Kim has changed his strategy of action, abandoning his undisguised hostility in relations with the US, ballistic missile launches and caustic verbal confrontation with President Trump, is astonishing. It was Trump who called Kim “a rocket man” and said that the US would respond to the DPRK’s actions with “fire and fury like the world has never seen,” while Kim threatened the US with “the greatest pain and suffering in history” should it impose new sanctions against his country. It seemed that with such rhetoric, a friendly summit between the leaders of these nations was a lowest probability event. 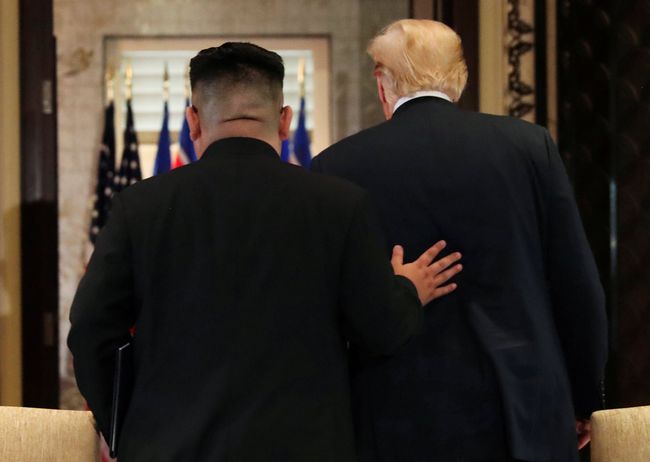 Kim’s offer of a meeting was made to the US leader on March 8. On April 18, the new US Secretary of State Mike Pompeo met with the North Korean leader, on April 21, the DPRK announced its intention to stop nuclear and missile tests, on April 27, Kim and South Korean President Moon Jae-in met, and the DPRK promised to relinquish nuclear weapons on the same day, on May 9, North Korea released three Americans from detention, and on May 10, Trump announced June 12 as the day of talks with Kim, The Independent reports. However, after just two weeks, on May 24, the occupant of the White House canceled the meeting due to the “hostile actions” of the other party, only to announce on June 1 that the agreement to hold a meeting was still in force. The media recently circulated a statement by Trump’s lawyer Rudolph Giuliani who said that the DPRK leader Kim “begged” the US not to cancel the negotiations.

The Day turned to experts asking them to comment on the significance of the historic meeting between the US and North Korean leaders, explain how important it would be for the US and the world in general, and why Kim, after years of open hostility towards the US, had begun to change tactics.

“This meeting triggered a wave of polar opposite opinions, ranging from high expectations of extraordinary results and to cool opinions that nothing special would happen. Today [June 12. – Ed.], after the signing procedure for a comprehensive declaration (as it was described by the signers themselves – the American president and the leader of North Korea), they agreed that the document would be expanded to cover the gradual process of denuclearization in North Korea, and the world would see a departure from the past towards a certain degree of openness and transparency in the political processes in that country.

“The most important conclusion is that, in any case, the signed document is very important from the point of view of international security. This is due to the nuclear potential of North Korea. It is still unclear how open the North Korean side would be about their nuclear potential, but the mechanism has been launched. Subsequent negotiations are likely to detail this process and will deal more with verification. In addition to its security importance, the declaration is also of high political significance, especially for Trump and his administration, as they need to demonstrate to the world that there has been a major shift on this issue. It is also important for the domestic American audience, since after the G7 meeting and the split that has taken place between Americans and their allies in that coalition, the situation is quite tense. If the agreement succeeds, it will improve the Republican party’s chances as it competes in the coming midterm elections in America. Meanwhile, if the outcome proves to be less successful than the administration would like, there will be a decrease in the public interest and number of assessments of these events.

“However, the very fact of the signing may somewhat repeat the situation with Iran, only now applying to this specific location, which still presents an extremely acute problem first of all for its neighborhood, but also for the world as a whole.

“As for the reasons behind Kim changing his position, there is a set of factors in play here. Firstly, the domestic economic situation in the country. Secondly, the influence of such an ally as China. After all, this plan was supported by the PRC, and they wanted to be part of this process. Currently, the situation in Korea will depend on what kind of assistance China will provide. One can discern some indirect interest in this situation on the part of Russia as well, since there was an initiative to hold a summit meeting with the Russian leader this fall. That is, such a step by the North Korean leader has caused a boom of political interest in that country, its role and next steps in the international arena.”

“IT WILL BE A VERY DIFFICULT PROCESS, AND THERE WILL BE PLENTY OF PITFALLS”

“It was Kim’s secret dream – to join the Western world in person (not taking North Korea for the ride) and resolve his own issues by solving the DPRK nuclear missile problem. Therefore, we saw that both he and Trump behaved rather strangely and inconsistently as this summit was approaching. And during the event, one could see that it was more like a performance than some sort of talks. Trump said before the meeting that this would be a major event and that it would offer some prospects, but these are mere declarations that will not have serious consequences. It should be borne in mind that both countries have been in a state of war since 1953, and there are some really very serious problems, apart from the DPRK’s missile and nuclear program, which complicate establishing a dignified relationship.

“On the one hand, one should welcome the fact that the summit took place, that the two leaders shook hands, and that the process of settling bilateral relations has begun. The world should welcome this, and the assessments of it can only be positive. On the other hand, it will be a very difficult process, and there will be plenty of pitfalls. One should take into account not Pompeo’s statement that the negotiations took place sooner than expected, but rather a restrained reaction of the other parties to this problem, since it is not only about the relations between North Korea and the US, but also the relations between the two parts of Korea, and there is also China, which too was a party to the Korean War, and 400,000 Chinese were killed in that war, which remains a painful issue even now. It is good that, despite all the obstacles on the path to this summit, it took place and that the declaration was signed, so there is a certain road map now for further resolution of all issues. But this is not a simple process, and we will see a lot of difficult situations that will require from the US, above all, the art of diplomacy. While North Korea’s decisions are taken by one man, and Kim’s word is final, the democratic US has Congress and national interests, and this is not a one-man act by Trump.

“Speaking about the reasons for Kim changing his rhetoric, back in 2012, immediately after coming to power, he wanted to ‘sell himself dearly’ to the Americans. And this is not my assessment alone, but that of the entire expert community, including Chinese scholars. Let us say that this can be even seen as a special case of the intergenerational conflict problem. It was clear from the outset that Kim Jong-un was not a true believer leader, like his grandfather Kim Il-sung. Kim Jong-un is an entirely different person, he was educated in Switzerland and knows what a civilized world is, and for himself personally, he wants to transform from the leader of a hungry and miserable country into some kind of oligarch. And he is going down this path.”