On the eve of a great terror

Or Why the intelligentsia is now an instrument of the authorities

Mikhail Khodorkovsky has said bombastically that he will not go to Ukraine if he is invited to. Nobody has invited him so far. He will not go because Ukraine is at war with Russia.

A few days later the Investigation Committee summoned his father for an interrogation. Many used to cry out before being shot: “Glory to Stalin!” This helped nobody.

But life goes on, as the Russian intelligentsia, thrilled over the price of the Russian presidential spokesman Dmitry Peskov’s watch, keeps saying all over the place. They have no time to think of such trifles as the formation of a Ukraine salvation committee by Mykola Azarov. I remember reading, when a child, in a book about Suvorov (not Viktor) that he was the liberator of Poland. I asked my father: liberator from whom? From the Poles, the answer was. The same applies to the savior Azarov.

Well before this, there was a savior named Kuusinen who ultimately failed to reach Helsinki on a tank. There were also Husak, Kadar, and Karmal. This old ploy was well tested long ago, when Russia was seizing Ukraine and Transcaucasia to restore the Russian empire under the name of the USSR. It tried to clinch a similar deal with Lithuania in 1991 – there was also a salvation committee.

The worthiest people considered, up to the last minute, that Crimea could not be seized. Nor did they expect Russia’s direct military intervention in the Donbas. So why should the arrival of Azarov and his committee in Kyiv on a Russian tank be considered impossible? Or the proclamation of Donetsk an interim capital of Ukraine? Or the transfer of eight regions that form Novorossia to the jurisdiction of this committee? Moreover, Moscow can recall the transfer of Ukraine’s capital to Kharkiv. Azarov and other committee members may as well show up there. The mood in the city is not being probed, while the information that is coming from there, especially the results of the latest elections, is rather alarming.

But nobody in Moscow has time to discuss this. They are shutting their eyes even to the fact that the country is on the eve of a new great terror – a vertical purge of the elites. One of the regime’s spokespeople, archpriest Vsevolod Chaplin, is talking again about a change of elites. Repressions against those involved in the Skolkovo project and Anatoly Chubais’s inner circle clearly show that this change is coming up. During the Medvedev presidency, all these people hoped to form one more elitist group that relies on an innovational economy and integration with the West. Now they are on the receiving end. And the role of Alexei Navalny is now becoming much clearer.

A great terror is coming up. The previous one was organized vertically – from the minister to the cleaning woman, from the marshal to the lieutenant. As a result, more cleaning women and lieutenants died than ministers and marshals. It is impossible to resist this. All that is left is sympathy – also to ministers, marshals, and corruptionists. Totalitarian egalitarianism is aimed at depriving people of the ability to sympathize and making them rejoice at the fall of those who have risen too high. It is for this reason that I consider the populist and social voyeur Navalny an ally and accomplice of the authorities. The same applies to all those who support him: they are all preparing society for a great terror and depriving people of the ability to sympathize.

The people who consider themselves champions of democracy do not notice in the fumes of populism that they are turning into an aggressive and spiteful mob to which it makes no difference who to trample on. And, for the government, there is no boundary line between internal and external aggression. The attack on Ukraine was a way to mobilize and rally the populace, and the arrest of Chubais remains a strategic reserve of domestic rules.

I have long pondered on what is the best name for an entity referred to as totalitarian. You will hardly call it totalitarian state, let alone totalitarian society, while totalitarian community or commonwealth seems to be the best choice. It is this entity that helps everybody realize the philosophy of a common cause and have their own niches. This applies even to outcasts, for they still remain part of the system.

The contributors to Vekhi (“Landmarks”), a collection of articles on Russian intellectuals published in 1909, were honestly trying to find out what the caste that called itself intelligentsia really was. At the time, being part of the intelligentsia was a corporative or class pride. Although this class was informal, it was more than real and socially important. In a totalitarian epoch, including the current relapse of totalitarianism, it is the pride of belonging to a corporation of a corporate state. Both things exclude hierarchy of social identity and replace pride with belonging to the nation and society. The purpose of corporateness and “small deeds” is to thwart social unity. As for the nation, nazism and its racial theory is not nationalism which engenders a nation state. The same applies to the Russian spirit of a great power and an empire. 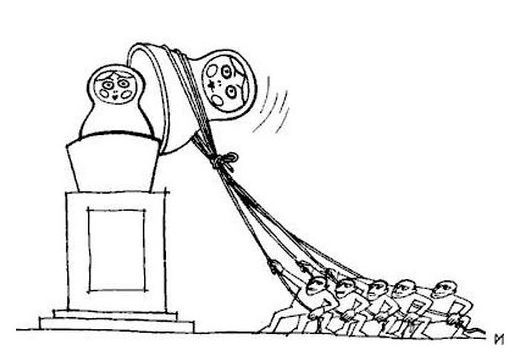 To be free, you must kill the intellectual in yourself. You will have to kill many things, including admiration for and seeking the approval of the people, enlightenment, and tolerance for what destroys tolerance. All totalitarian regimes were engendered by intellectuals with a corporate identity, mentality, and ideology. The current one is no exception.

The intelligentsia still remains an instrument of the authorities. Today, the Russian intellectual is embittered because some bureaucrat has a watch more expensive than his apartment and tomorrow this intellectual may have his apartment taken away. This has occurred millions of times, but intellectuals are as they were born yesterday.

Intellectuals are unable to build an elementary logical chain, when discussing the current events. The Russian progressive public is squealing and moaning over the appointment of an Orthodox priest, who has nothing to do with science and museums, as director of the preserve Tauric Chersonesus. They are screaming about civil society and never recall that this is occurring on a territory Russia has seized and occupied.

The museum people – also intellectuals – have received what they have struggled for. This is a direct consequence of the Crimea-is-ours attitude. They hoped for Russian budgetary funding but did not expect an Orthodox commissar to be attached. They will also have to gratify Putin – he is going to Crimea to make new historical discoveries.

Yes, there is a cultural pogrom in Russia. The chief perpetrator is the current Minister of Culture, Medinsky, but anybody else may find himself in his place. It is too late to save museums, theaters, cinema, literature, science, Russia, and humankind. There can be no civilized – political, social or cultural – institutions here. No theaters, hospitals, schools or museums. What is left is to save our own selves.

The salvation is only in a sober approach. In reality, there is no choice between the Crime-is-ours attitude and condemnation of the criminal-style seizure. Moreover, once it emerges for a minute, the individual opts for “Crimea is ours.” The choice will come later – between lies and the truth, between legend and knowledge, between myth and belief in God. It is a true – profound, essential, and, if you like, existential – choice.

To deceive yourself that you will wake up tomorrow in the previous world or to study the new world soberly and fearlessly, a world that comes to stay for a long time and, for people of my age, perhaps forever, – this is the main choice.

The Crimea-is-ours and they-go-bust attitudes are two mythologies or even one at a closer examination. The need in exact knowledge and a disenchanted world (Max Weber’s term) emerges in a monotheistic or the Judeo-Christian civilization only. As I have no gift of being a missionary, I cannot possibly argue with those who celebrate the birth of a Russian world as well as with those who are sure this world is about to tumble down. The talk of an inevitable collapse is only of benefit to and is encouraged by the creators of this world. I can only spell out what I consider the main thing, even though it is, of course, unpleasant to be aware of this.

Velvet revolutions have succeeded because they occurred in velvet conditions. And they were in fact not revolutions but a return to history, to a normal national development. The Russians have just stopped hindering this – the Kremlin has given and the Kremlin has taken. I mean, on the contrary, it has taken and given.

Had it not wanted to give, things would have been going as usual.

Now the destiny of Ukraine, Belarus, Georgia, and even the Baltic states and Finland only depends on what the Kremlin will want. Let us not delude ourselves: it can ruin these states very fast and without too much effort – no NATO will help. But it can also ruin slowly, which it is successfully doing in Georgia and Ukraine. The people of these countries, as well as the whole world, will have to live, always watching the Kremlin’s reaction.

This is in fact the erosion of national identity, the ruination of national dignity, and the eternal waiting for barbarians – and not just common barbarians. The Ancient Greek civilization successfully resisted the Persian one, and Ancient Rome could cope with Carthage and Parthia. But Rome failed to stand up against the Barbarians because they had borrowed many things from the Roman and other civilizations.

The most awesome and dangerous force is barbarians who have mastered civilization technologies – military, political, and communicational – but remain hostile to the values of civilization. Russia has always been the case – it did and does pose a threat to civilization. The danger is coming from Russia, not from ISIS or a nuclear-armed Iran.

But just try to say this to a Russian intellectual.