Why Valentyna Telychenko has been disqualified from participation in the proceedings, while Oleksii Pukach complains of “pressure which is worse than under Viktor Yanukovych”
Ivan Kapsamun

The last hearing of the Court of Cassation in the Gongadze-Podolsky case began an hour late. The judges offered profuse apologies, citing a huge caseload. However, Valentyna Telychenko, representing the victim Myroslava Gongadze, did not stay long enough to hear the apologies, as she claimed the need to attend to some urgent business, filed a written statement and left. It was a bad idea, because it was precisely her actions that turned out to be the principal battleground of the day.

However, it came only after a sensational statement was made by Oleksii Pukach, the immediate perpetrator of the crimes against journalist Georgy Gongadze and public figure Oleksii Podolsky, who is serving a life sentence. “I am currently under pressure,” the convict began. “I have repeatedly described what happened to me under the Yanukovych administration, in particular at the Prosecutor General’s Office (PGO) and the Pechersky District Court. However, it has continued, both after I was transferred to the Chortkiv Penal Colony, Ternopil oblast, and now that I am held at Lukianivske Pre-Trial Detention Facility in Kyiv. Unidentified masked men enter my cell and conduct searches; they took me outside throughout winter while I was ill with pneumonia and fever, my medicines disappear, and even drinking water which my children send me disappears too. That is, I want to inform you that the pressure on me is even worse than under Yanukovych. When I was being transferred to another facility, they refused to provide me with mattresses and pillows on some occasions and did not inform my family to enable them to bring me something at least, and I was not allowed to use the restroom sometimes. That is, the lawlessness has continued. When I tried to find out why it was happening, they made it clear that the pressure was exerted on behalf of the PGO, and in particular Telychenko in order to break my will so that I remained silent and did not offer important testimony.” 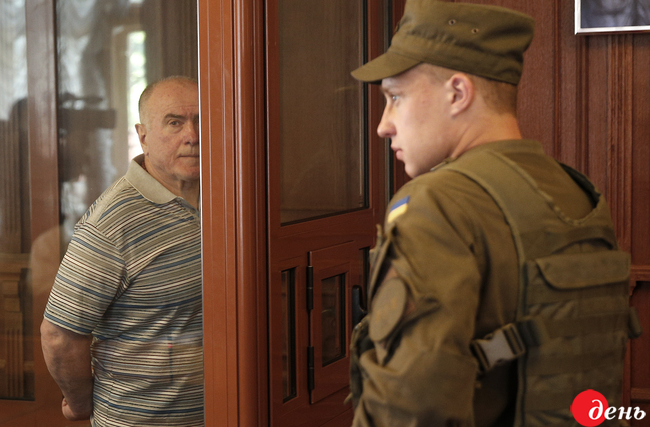 THE COURT HAS RULED THAT THE PGO, THE NABU, AND THE SSU HAVE TO ENTER INTO THE URPI AND INVESTIGATE PUKACH’S REPORTS OF PRESSURE EXERTED ON HIM IN THE PENAL COLONY AND THE PRE-TRIAL DETENTION FACILITY / Photo by Ruslan KANIUKA, The Day

Pukach’s defense lawyers immediately responded and said that they had never heard about it before, and therefore stood ready to immediately file a motion over the pressure exerted on their client, which would state the need to institute security precautions in the pre-trial detention facility and conduct a medical examination. “I said on a prior occasion that the investigating prosecutors had threatened Pukach with murdering his children, but now the pressure continues, and the facts he cited show that there is a threat to his life, and therefore it is necessary to institute security precautions,” attorney Hryhorii Demydenko stated. “In addition, Pukach’s testimony is effectively a crime report, so I request that the court send an appropriate request to the National Anti-Corruption Bureau of Ukraine (NABU), since sending it to the PGO and the Security Service of Ukraine (SSU) will not guarantee a proper investigation.”

Presiding Judge Natalia Marchuk took the motion into account and informed the audience that the PGO had not provided any additional information regarding entering of the earlier crime report filed due to pressure and intimidation against Pukach into the Unified Register of Pre-Trial Investigations (URPI). “The PGO has no rights under the Constitution, they have only duties,” Podolsky replied. “I do not understand how they dare to refuse to enter the report of a crime against Pukach which you sent them, since it is their duty. He reported new crimes committed against him today, which information you also need to send to the PGO. However, given that they stubbornly refuse to enter an alleged crime in the URPI and ignore the court, you must speak openly about it and raise the issue with the Verkhovna Rada and the president.” 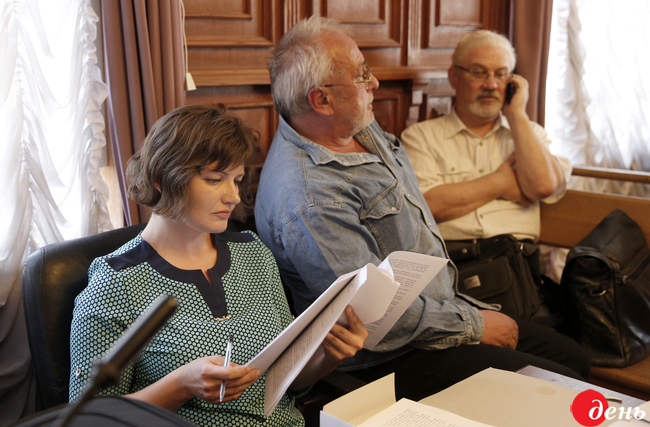 Podolsky’s team has filed its own motions as well. “We have provided the court with all necessary arguments, evidence, and calculations that clearly show the need for declassifying all records of court hearings in the trial and appeal stages,” stated the victim’s lawyer Tetiana Kostina. “For example, clear evidence of discrepancy between records of the trial court hearing and the real circumstances of the case is offered by the absence from the record of Pukach’s world-famous words that the verdict will be clear to him only when Kuchma and Lytvyn will be in the dock with him. These records’ declassifying was unlawfully rejected by Judge Andrii Melnyk, and that same person unlawfully closed the trial court hearings to the public in 2011. The public needs to learn the truth about what really happened in unlawfully closed hearings held by the trial and appellate courts.”

A real sensation, given its outcome, was made by the issue of disqualifying Telychenko from participation in the proceedings. Such a motion was filed by the legal representative of the victim Oleksandr Yeliashkevych back on October 12, 2016. “We have filed a motion to disqualify Telychenko, the representative of the victim Myroslava Gongadze, from participation in the proceedings on the grounds of her being a witness in the criminal case, who pursuant to Art. 63 of the 1960 Criminal Procedure Code of Ukraine should be disqualified from representing the victim Gongadze,” Yeliashkevych stated. “In addition, we have done so on the grounds that Telychenko actually carried out the duties of deputy prosecutor general of Ukraine (which office she acquired in an unknown and questionable manner) and repeatedly reported in the media her actions as that of deputy prosecutor general prior to the hearing in the High Specialized Court of Ukraine, as well as provided comments on the prospects of the Pukach case and the possible results of the PGO investigation into the instigators of the murder of Gongadze and the torture of Podolsky.” 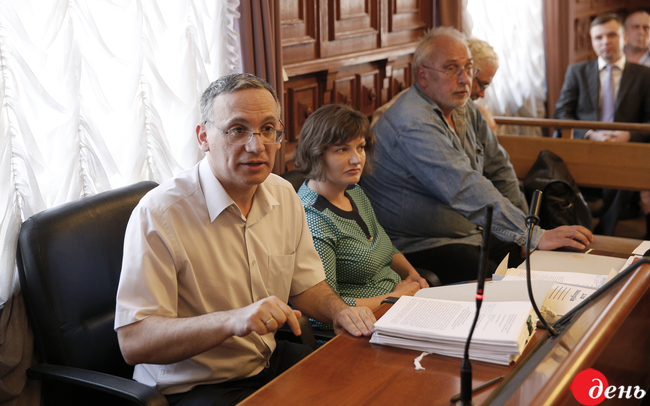 The proceedings did not lack in emotions. The presiding judge often had to calm things down. Compared with hearings, say, in the appellate court (where emotions were running high as well), the High Specialized Court witnessed much more constructive work. So, after the panel of judges heard from all the parties, it took the following decisions. “We announce the resolutive part of the ruling,” Marchuk said. “The reasoning behind it will be written down and published separately. 1. Regarding the crime reports that were made by Oleksii Pukach, we have ordered them to be sent to the PGO, the NABU, and the SSU to be entered into the URPI to enable a full and immediate investigation. 2. We have decided to insist once again that the PGO enter into the URPI for investigation the information about Pukach’s previous reports of blackmail and threats. 3. The chairmen of the Pechersky District Court of Kyiv and the Kyiv Appellate Court are thereby instructed to take measures for declassifying audio and technical records made during the trial and appellate court hearings. 4. Valentyna Telychenko is thereby disqualified from further participation in the Pukach case, and the victim Myroslava Gongadze is invited to retain another person as her legal representative if necessary to ensure representation of her interests.”

The victim Gongadze reacted quite sharply to it. “The panel of the Court of Cassation, led by the Presiding Judge Natalia Marchuk, acted unlawfully and in breach of my rights as a victim when it stripped me of the ability to represent my interests in the cassation court proceedings against Pukach over his role in the murder of Georgy Gongadze,” she posted on Facebook “I consider the disqualification of Telychenko as my representative to be unreasonable and unlawful, and plan to lodge a complaint with the Supreme Council of Justice and seek redress from the European Court of Human Rights. I would like to remind my readers that Ukraine has not complied with a previous decision in the case ‘Gongadze v. Ukraine’ and has not even brought the trial of Pukach to an end.” 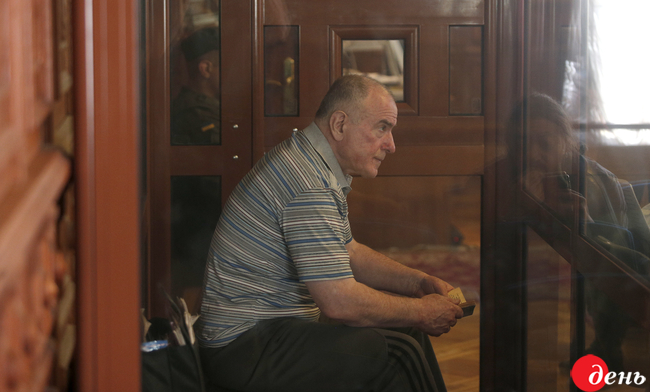 These words were later echoed by Telychenko herself. “The panel’s ruling is completely unlawful and has no provision for appeal,” she stated in a comment for Detector Media. “Accordingly, it may be grounds for an appeal to the European Court and the High Council of Justice. The trial is being intentionally slowed down, and it is difficult to make any predictions. It is possible that the High Council of Justice will have enough time to rule on the High Specialized Court’s actions. I was not a witness in the case, as referred to by Podolsky. I, like many other friends of Georgy Gongadze, was questioned by the investigator in September 2000. What he learned from me was that I had personally known the man and suspected it was murder. You know, it is a quite common occurrence when some people need to get rid of a lawyer working on the case. This is a long-established practice. What does the investigator do to achieve that? The investigator questions the lawyer as a witness. The fact of me having been questioned does not mean that I saw something that had to do with the crime. That is, it does not mean that I am a witness. The presence in the case file of a transcript of a person’s questioning as a witness does not automatically make that person a witness in the case. Now, Myroslava Gongadze is effectively denied the right to represent her interests in court, but she does not intend to seek another representative, since I still hold a commission from Myroslava Gongadze, and I continue to be her representative. I have only been disqualified from the case being heard in the High Specialized Court. We have yet to see how this case will end. Maybe I will come back to it yet.” She added that she would attend the hearings for now as a member of the public.

“Instead of going to court and proving her case, Telychenko engages in making unsubstantiated statements,” Yeliashkevych responded in a comment for The Day. “Moreover, with her statements, Telychenko is pushing Myroslava Gongadze into making statements and taking actions that are not only outside the Criminal Procedure Code’s framework, but would be illegal as well for both Gongadze and the judges considering the case in the court of cassation. It is enough to analyze only a small part of Telychenko’s actions and statements in court and out of court and on TV, her media interviews, which she made throughout the years-long Gongadze-Podolsky case, to clearly reveal her true role. She is not a true representative of a victim. For years, her mission has been to influence the shaping of mistaken public opinion, to conceal the truth and discredit important evidence, influence witnesses and the defendant, distort facts which have become known to her in connection with her entry and participation in the case, and delude the public in order to allow Leonid Kuchma, Volodymyr Lytvyn, and other members of that organized criminal group to enjoy impunity. Because of that, and given her reaction to the court ruling (she plans to continue to perform her duties), we are going to raise the issue of Telychenko’s criminal responsibility.”

So, the main struggle is still ahead. However, the latest hearing was one of the few events in the 17-year-long case where the team of Podolsky and Yeliashkevych achieved a positive result. The next hearing’s date will be announced separately, according to Justice Marchuk. It is possible, given the need to declassify large volume of the case evidence, that it will not be held until the fall.