A holiday with tears in our eyes

It became clear soon after the abortive coup that Yeltsin was no better than Gorbachev, and the transfer of power to Putin was a logical step because democrats lost to a large extent in August 1991

Undoubtedly, August 1991, when an almost bloodless revolution in Russia put an end to the communist regime and triggered the factual collapse of the USSR, was by far the most important period in my life. For I not only watched the course of history at the time, but was also taking a personal part in a really great and epoch-making event, even though my participation was quite modest. In the morning of August 21, when I was visiting a dentist, I heard that armored vehicles had crushed three young guys to death. And no sooner had I come round from the anesthetic after surgery than I headed for the White House. I was not the only one to feel this impulse. Having learned about the tragedy, thousands of Muscovites also rushed to defend from the putschists not only President Boris Yeltsin, the Russian government, and the Supreme Soviet of the Russian Federation, but also all the democratic gains of Gorbachev’s perestroika, which, as none of those who came to protect the White House doubted, the State Committee on the State of Emergency (GKChP) would root out.

We did not know many things at the time, and information was very scarce and contradictory. For this reason, the GKChP, which enlisted support from the defense and law-enforcement ministers and did not hesitate to move troops and armored vehicles to Moscow, seemed to be a very formidable force. There were very few people with military, still less combat, experience (mostly those who saw service in Afghanistan) among the people who gathered in front of the White House. But even my more than modest knowledge of things military was enough to understand that tanks will tear down the primitive makeshift barricades in a matter of minutes. We were told to stay calm: if the White House is really going to be stormed, we, who have formed a “live ring,” will have to part and let the armored vehicles go through. But many, including me, knew very well, of course, that militarily untrained and unorganized people would be unable to carry out such complicated maneuvers. Therefore, should the military operation to seize the White House begin, hundreds or thousands of people will be inevitably killed with bullets and projectiles, under the tanks’ tracks, and just in the crush.

I think about 20,000 people gathered in front of the White House at the time. But perhaps no one knows the exact number. The only hope was that, even having orders, soldiers and officers would not fire at the unarmed people or run them down with tanks. We did not know at the time whether the putschists were going to storm the stronghold of the Russian leadership. Incidentally, we still do not know how serious the intentions were and what would have happened if there had been no split among the top brass and soldiers had not fraternized with the demonstrators. But the crowd around the White House had no fear. The people believed they would manage to defend democracy, although there were not many rational grounds for this belief at the moment. I will also note that, contrary to the later claims of Yeltsin’s adversaries that there were a lot of drunks near the White House and vodka flowed like water, I do not remember any alcohol being spread among the White House defenders. There were only sandwiches, pies, and such beverages as tea and water. 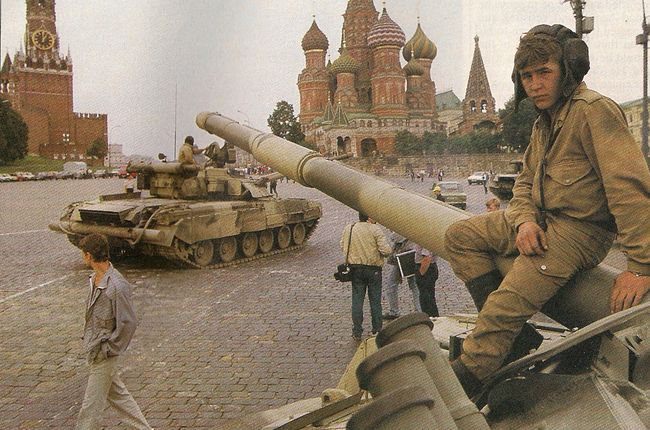 Incidentally, while I was near the White House (we stayed on until the evening, and most of the people began to leave after 8 p.m., when it was clear that the putschists had lost), I conducted a small opinion poll. I just asked those who were next to me about their social position. It turned out that almost a half of them belonged, as I did, to the intelligentsia or were students and they came to the White House mostly for idealistic reasons in order to defend the so hard won democratic freedoms. The other half consisted of employees at joint ventures with foreign capital and cooperatives. Both things emerged during the perestroika, and these people were, above all, struggling to keep their high incomes intact and to defend the right to do business legally. Incidentally, it is cooperatives that provided the White House defenders with sandwiches and beverages. Then there was a victory. We were leaving the White House with a sense of having done our duty. The streets were crowded. Everybody was happy with the victory over the putschists. I did not hear a word in defense of the GKChP. Overall euphoria and the feeling of unusual unity reigned supreme. It seemed to us that the triumph of democracy was irreversible, things would be OK, and we would overcome the existing difficulties (for we were still thinking in terms of Soviet cliches) and get rid of the Soviet legacy. How mistaken we were!

“And, for me personally, the anniversary of the August revolution (or the August putsch, if you like) is a very sad one. And most of the Russian democrats are in a sullen mood these days. The hopes we cherished after defeating the GKChP have not come true at all. Moreover, it became clear very soon that they would not come true. In my case, the euphoria over the victory of the August revolution lasted for 10 days or so. On the 10th day I learned from a reliable source that Yeltsin had gone on a binge again after crushing the putsch.

Of course, the Russian president’s drunkenness alone cannot explain why no vital measures for true democracy were taken after the victory over the GKChP. Unlike in the case of the Stasi in East Germany, no control of democratic activists was established over the KGB and its archives. The law-enforcement bodies and the army remained practically the same as they were in the Soviet Union. Everything boiled down to tearing down the Dzerzhinsky monument, while most of those who backed the GKChP kept their offices and clout intact in post-Soviet Russia. No lustration was carried out.

And, instead of calling the presidential and parliamentary elections now that Russia had acquired political independence (in which Yeltsin and democratic forces would have won a landslide victory, taking into account the public mood at the time), Yeltsin decided to liberalize prices in order to place the burden of transfer to a market economy onto the shoulders of the grassroots, not of the nomenclature minority. He also tried to coexist with the Russian Supreme Council elected way back in the Soviet era (as a result, he had to disband it by means of tanks).

Of course, it was impossible to predict the next events just 10 days after the suppression of the putsch. I only understood then that a heavily drinking president was not up to the really revolutionary transformations which were indispensable in order to make a democratic Russia out of the communist one. This put an end to euphoria. We were idealizing Yeltsin at the time, although his American goings-on, for example, were common knowledge. As for Gorbachev, the democratic public had already been disappointed with him by the moment of the putsch. What also contributed to this was the death of civilians in Tbilisi and Baku, Vilnius and Riga. This is why it was much more difficult to persuade the White House defenders to come out in defense of not only Yeltsin, but also of the legitimate USSR President Gorbachev. But it became clear very soon that Yeltsin was no better than Gorbachev, and the transfer of power to Vladimir Putin was a logical step because democrats lost to a large extent in August 1991 – at the moment they thought that they had won.