A man of principles and honor

The American Republican Senator John McCain died aged 81 last weekend; he was well-known not only in the US but throughout the world, and enjoyed great respect because he always defended his principled positions without any fear of calling a spade a spade.

It became known last July that McCain had been diagnosed with glioblastoma, an aggressive form of brain cancer, and on August 24 this year, the politician’s family reported that he had chosen to discontinue medical treatment “with his usual strength of will.” The next day, Senator McCain departed for eternity. “He passed the way he lived, on his own terms, surrounded by the people he loved, in the place he loved best,” his wife Cindy posted on Twitter.

John McCain was the son and grandson of US Navy admirals, he followed in his ancestors footsteps and graduated from the military academy in Annapolis, becoming a naval aviation officer. He went on to participate in the Vietnam War, and after his plane was shot down, he was captured and spent more than five years in captivity where he was subjected to torture which had lifelong consequences (due to the injuries sustained he could not raise arms above his shoulders). With his military achievements, McCain earned Silver and Bronze Stars as well as Purple Heart, Legion of Merit, and Distinguished Flying Cross medals. After completing his military career, McCain decided to try it in politics. In 1986, he was elected a senator from Arizona, and then re-elected for this position five times, representing this state in the US Congress for more than 30 years. McCain also ran twice for US president, but lost to George W. Bush in the primaries in 2000, and to Barack Obama in 2008.

McCain was known as a true friend of Ukraine, visited Kyiv during the Euromaidan, actively promoted military assistance to this nation, advocated for increased sanctions against the Kremlin, and criticized Russia’s actions. It should be noted that in March 2015, McCain gave an interview to Den’s correspondent Mykola Siruk (“Ukraine must definitely be free of Russian domination”) and accepted our gift of books from our Library series.

US President Donald Trump did not escape McCain’s straightforward criticism either. In particular, the senator, despite being gravely ill, arrived in Congress and cast the decisive vote against the repeal of the Obamacare medical insurance program, criticized Trump for congratulating Vladimir Putin on his election victory, and called Trump’s personal meeting with the Kremlin leader “one of the most disgraceful performances by an American president in memory” and “a tragic mistake.”

“A PATRIOT OF THE HIGHEST ORDER”

“John McCain was a man of honor, a true patriot in the best sense of the word. Americans will be forever grateful for his heroic military service and for his steadfast integrity as a member of the US Senate,” stressed ex-president Jimmy Carter.

“He frequently put partisanship aside to do what he thought was best for the country, and was never afraid to break the mold if it was the right thing to do,” ex-president Bill Clinton’s statement reads.

“John McCain was a man of deep conviction and a patriot of the highest order. He was a public servant in the finest traditions of our country. And to me, he was a friend whom I’ll deeply miss,” said former US President George W. Bush.

Another former president, Barack Obama, noted: “Few of us have been tested the way John once was, or required to show the kind of courage that he did. But all of us can aspire to the courage to put the greater good above our own. At John’s best, he showed us what that means.”

Meanwhile, the current US President, Donald Trump, limited himself to a brief message on Twitter, in which he only expressed his condolences to the McCain family. According to The Washington Post, the resident of the White House banned the release of an official statement regarding the senator’s death which paid tribute to his heroism.

“John McCain was a man with a big heart. He was a great friend of Ukraine and devoted part of his life to protecting Ukraine and Ukrainians,” President of Ukraine Petro Poroshenko posted on Facebook. Statements of sympathy and recognition of McCain’s important role have come from many American and foreign politicians, including French President Emmanuel Macron and German Chancellor Angela Merkel. 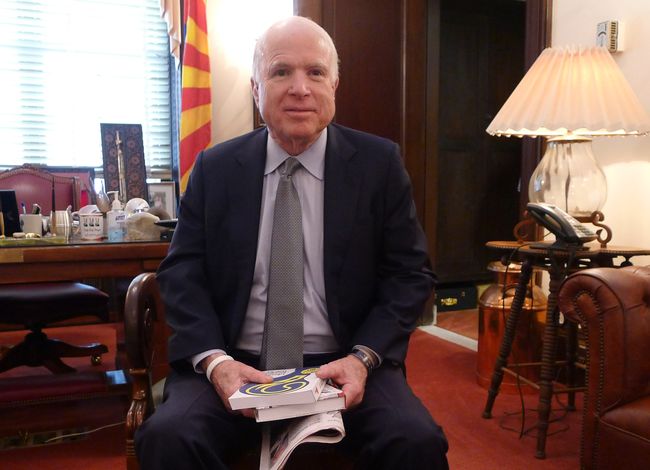 People will bid farewell to the senator for five days this week, in particular in the US Capitol Rotunda (such honor is only accorded to the most prominent citizens, and only 12 senators have been honored with it, writes The New York Times) and the Capitol of Arizona. McCain himself planned his funeral. Ex-presidents George W. Bush and Barack Obama were invited to attend the ceremony, but the current resident of the White House, Donald Trump, was not, and Vice President Mike Pence will take his place at the funeral. McCain will be buried on September 2 in a private ceremony at a military cemetery in the city of Annapolis.

“John McCain personified the ideals of the free world, the principled position of fighting for dignity and freedom of other peoples. For this, he was greatly appreciated in the Baltic States, Ukraine, and Georgia. He clearly understood what the Soviet Union was and made every effort to bring the ‘empire of evil’ to an end. He boldly spoke of Putin’s aggression against Ukraine and correctly determined what was happening here.

“The senator helped Ukraine in the difficult post-Maidan period, and then worked to get defensive weapons provided to the Ukrainian military, in particular the Javelin missiles. He favored more severe sanctions which would target Nord Stream 2 as well. That is, he clearly understood geopolitics and acted on his values. The US and the world will miss a policy maker of such a scale, who did not play by others’ rules, but imposed his own value-based rules.

“For Ukraine, McCain was a real friend. It would be nice to rename a street to honor him. In addition, staying the course on reform and fighting for a strong Ukraine that can stop the Kremlin (which attacks the entire Western world by meddling in elections, bribing politicians, and imposing its ideology) would be a fitting tribute and expression of gratitude to Senator McCain for all the efforts he made.”

“HE WAS A POWERFUL VOICE FOR UKRAINE IN WASHINGTON”

“John McCain was a fearless defender of the freedom of oppressed peoples against their authoritarian governments and of smaller nations against their larger, aggressive neighbors. In both roles, he was a powerful voice for Ukraine in Washington. He endorsed both the Orange Revolution against a falsified election and the Revolution of Dignity against the increasingly authoritarian Yanukovych regime. He advocated strong support for Ukraine (and Georgia) in the face of Kremlin aggression.”

“Senator McCain was a unique figure in the Senate, a morally principled leader, whose world view was shaped by the Vietnam war and his military service. McCain knew that foreign policy, security treaties, and diplomacy all were a matter of flesh and blood. His sacrifices and the sacrifices of the warriors with whom he fought, shaped his tough-minded approach to foreign policy. He knew that it was all about real people, real suffering, and not about abstract concepts. In this sense, the lessons he learned are some of the lessons absorbed by Ukraine and Ukrainians in the midst of Russia’s unrelenting war of the last four years. His support of people’s fighting for democracy was also an outgrowth of his wartime sacrifices. He saw his country as a force for good and an ally of those who shared its democratic values. It was this worldview that drove him to support Ukraine’s European aspirations and its resistance to Russian hegemony.”

Steve PIFER, a senior fellow at the Brookings Institution:

“John McCain displayed his character as a young naval officer when, as a prisoner in North Vietnam, he refused to accept early release, saying that those American personnel who had been held longer than him should first be freed. As a Senator, he spoke out for what he believed was right, even if it crossed his own party’s line. He held strong views – some of which I disagreed with – but he saw politics ultimately as a collaborative process and understood that those on the other side of the Senate aisle might disagree with him but could still love America every bit as much as he did. My country needs more politicians like him. Senator McCain believed that the United States could be a force for good in the world. He led on Capitol Hill in shaping a US policy of support for Ukraine. He did so because it was the right thing to do, and it was the right thing for America to do. With Senator McCain’s passing the US Senate will be a diminished place.”

“HE BECAME ONE OF THE MOST IMPORTANT ALLIES OF UKRAINE...”

“Senator McCain was a controversial political star in the Washington firmament: a Reaganite Republican who survived the brutal five-year Vietnamese captivity, he consistently tried to reach the summit of American politics, having made a bad choice of the vice presidential candidate (Sarah Palin) in the 2008 election and often playing along with the notorious elements of the Tea Party and throwing up roadblocks in the path of the Obama administration. On the other hand, as a hawk, as a steadfast foe of all the dictators of the world, he advocated the pro-active, if not invasive, US foreign policy role: that is, he advocated spreading the American vision of democracy and freedom with ‘fire and sword.’ In McCain’s view, the post-Maidan Ukraine had a similar freedom-loving halo, and he became one of that nation’s most important Washington allies in its fight against Russian aggression. The greatest irony of McCain’s life was the fact that for many Americans, he became almost the mainstay of the Senate resistance to his fellow Republican, the incumbent US president. When already preparing to depart for eternal peace, this tireless fighter against tyranny urged his party fellows to stay awake on guard of democracy at home and not allow an alien element, which he undoubtedly saw this White House resident as, to mock and distort it beyond all recognition.”