Hetman Pavlo Skoropadsky of Ukraine is graphic proof. There is no telling how many myths and lies surround his name, courtesy of Soviet propaganda. It is necessary for Ukraine to comprehend what he did as Hetman and why, considering the challenges of the 21st century. This explains the holding of the All-Ukraine Scholarly Conference “Centennial of the Ukrainian State under Hetman Pavlo Skoropadsky,” jointly by the National Academy’s Hrushevsky Institute of Ukrainian Archeography and Source Studies (IUASS) and Kyiv’s Hetmanate Museum. Its purpose was to discard, or at least critically analyze the old stereotypes and myths relating to the Hetman’s life and activities.

The following presentations made during the conference attracted my attention: “Year 1918. Pavlo Skoropadsky: Personal and National Interest Aspects to his Life” by Heorhii Papakin, Ph.D., IUASS; “Pavlo Skoropadsky’s Coming to Power in Light of Contemporary German Language Press” by Ruslan Pyrih, Ph.D.; “The Problem of Continuity between the UNR and Hetman Pavlo Skoropadsky” by Ihor Hyrych, Ph.D., and historian Tetiana Ralduhina’s “Danylo Skoropadsky: Milestones of Life and Activity.” 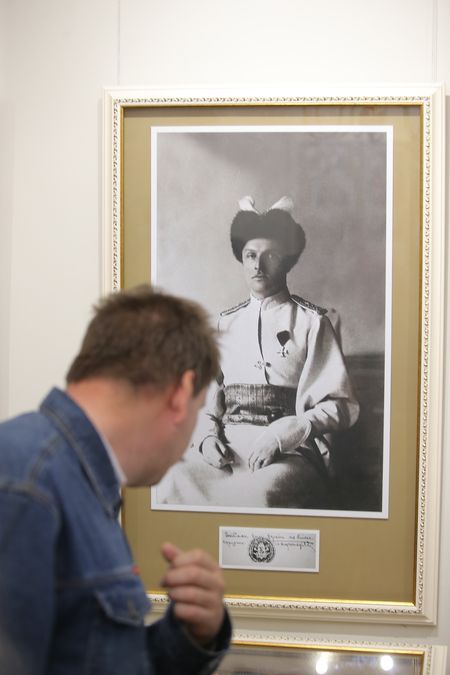 This is, of course, a short list of the presentations. In fact, the scholars who took the floor turned them into an interesting, unrestricted dialog with the audience, aimed at ridding [Hetman Pavlo Skoropadsky’s image] of misleading myths, specifically:

1 The myth about his fake patriotism, that the Hetman didn’t know Ukrainian, spoke Russian, and had little, if anything, to do with the Ukrainian liberation movement until 1918.

To say that Hetman Skoropadsky had nothing to do with Ukraine’s organized movement would be an overstatement, just as it is true that he wasn’t a career army officer. He said that he’d heard Ukrainian folk songs and seen portraits of Ukrainian national heroes when he was a kid. There are his personal effects, among them documents and letters that offer interesting data. As a graduate of the Page Corps of St. Petersburg [a privileged military academy in imperial Russia], 1893, and then a full-fledged Horse Guardsman, he wrote to his wife in 1897-98 that he wanted to quit, whereas the Red General, Aleksei Ignatiev, writes in his autobiographical book Fifty Years in Service that Pavlo Skoropadsky was always a stranger among the cadets and graduates (he knew him personally), and that he kept his distance.

Another meaningful fact is Skoropadsky’s attitude to Russia’s official holidays hailing its victories, including the 200th anniversary of the Battle of Poltava and the centennial of the Battle of Borodino. There is a letter from a minister under Nicholas II, formally inviting Skoropadsky to attend the festivities, dated 1909. He couldn’t refuse, but wrote one word in the margin: “Ravings.” In other words, his attitude to the Russian establishment was anything but devout. Mykola Mohyliansky [a noted Ukrainian public figure, diplomat, and ethnographer, 1871-1931] quotes him as saying, “I really hate [Russia’s] high society!” As it was, Skoropadsky felt at home only amongst the Ukrainian Cossack starshyna nobility. There is documented evidence to the effect that he wanted to revive starshyna’s 18th-century ideas in the early 20th century.

2 Another myth about his ancestors as, allegedly, true servants of Russian tsars, starting with Ivan Skoropadsky under Peter I, and that they disowned Ukraine.

The following are hard facts. Mykhailo V. Skoropadsky, General Treasurer of the Ukrainian Hetman State under Kyrylo Rozumovsky, in the 1750s-1760s, had a dim view on the incumbent Hetman. He was adamantly opposed to Rozumovsky’s policy aimed at liquidating Ukraine’s autonomy. His son Ivan Skoropadsky was a member of the Hetman’s Young Friends Society, but eventually distanced himself from Rozumovsky, for the same reasons. Under Catherine II, when various kinds of “liberal committees” were formed, Ivan Skoropadsky was rumored to become the next Hetman of Ukraine – if the empress decided to reinstate Ukrainian Hetmanate. In the 19th century, Yelyzaveta Skoropadska, his daughter, donated tangible sums to help the Taras Shevchenko Society (then acting in lieu of an academy of sciences). That’s what the national tradition is all about!

3 The myth about Hetman Skoropadsky depending on the German occupation authorities, specifically on the Kaiser.

The best way to refute it is by studying German press archives dating back to the spring and summer of 1918. One Berlin-based newspaper wrote, referring to sources at the headquarters of Prince Leopold of Bavaria: “At this time of ideologues, fantasts, and half-wits, he [i.e., Pavlo Skoropadsky. – Author] has proved to be a real man.” Neue Freie Presse wrote: “This Hetman could be a regent capable of organizing creative work and lead Ukraine on the road of constructive progress. His target is cooperation for all forces that are useful to Ukraine, regardless of their origin.” Der Tag wrote: “When political power changed hands in Kyiv, April 29, 1918, it was done by Ukrainians.” Pavlo Skoropadsky gave eight interviews to German newspapers, stressing that Ukraine would from now on be an entirely independent state. How does this add up to the allegation about his “complete dependence” on Berlin? On the other hand, there is no denying the strong influence exerted by the Kaiser’s army [on Ukraine].

Summing up, several facts from his life that appear to add to the Hetman’s profile: Volodymyr Vernadsky writes, referring to Mykola Vasylenko’s story about his last conversation with Pavlo Skoropadsky, that he asked the then minister of education: “Mr. Vasylenko, how do you feel about Ukraine’s complete national independence?” He replied: “I think that this isn’t a timely idea.” Note that this conversation took place in May 1918. The Hetman said: “In my opinion, we all of us should combine efforts to reach this goal.” Back in 1917, Pavlo Skoropadsky wrote to her wife: “I want to become a Ukrainian.” One can reasonably assume that he meant his political stand, rather than ethnic origin, considering that Pavlo Skoropadsky always regarded himself as a Ukrainian by origin. A lesson we should learn from in 2018.

By Ihor SIUNDIUKOV, photos by Artem SLIPACHUK, The Day
Issue:
№31, (2018)
Rubric:
Topic of the Day