A couple of hours before the arrival of Estonian President Kersti Kaljulaid, things livened up even more near the Presidential Administration building. Artist Volodymyr Kuznetsov was breaking chairs, while art professionals, film directors, civic and human rights activists were holding posters or standing with their ears plugged. In this way, the “No More Sitting Around!” event was held on May 22, the ninth day of the hunger strike launched by Oleh Sentsov, who is being confined in a solitary cell of the Bely Medved prison camp in the Russian city of Labytnangi.

This is a spontaneous initiative of concerned people who urge officials to spend less time sitting around in comfortable armchairs and do everything they need to do to get Ukrainian political prisoners in Russia freed. Activists remind the government that the process of releasing Ukrainian political prisoners in Russia and Crimea has practically stopped. Currently, human rights activists list 64 individuals as “prisoners of the Kremlin.” By the way, Russian security forces conducted yet another series of searches in Crimean Tatar homes in Bakhchysarai the day before, detaining Server Mustafayev and Edem Smailov, who are activists of the Crimean Solidarity, an initiative that helps families of political prisoners. The purported reason is the usual one: suspicion of involvement in the activities of a terrorist organization. Let us recall that Sentsov himself was sentenced to 20 years’ imprisonment by a Russian court on the false charges of preparing a terrorist attack.

“This is a spontaneously organized event, involving all those who are not indifferent to the fate of Sentsov,” stressed Maria Starozhytska, who is a journalist, screenwriter, and director. “Personally, I am convinced that Sentsov has now assumed responsibility for the fate of all 64 Ukrainian political prisoners in Russia. His hunger strike and demand that they all be released is a decision that is partly born of despair. It is because political prisoners have not received any assistance, and Sentsov has effectively compensated by his action, wholly or in part, for the efforts that the government should have been making.”

“I feel powerless. A man sitting in a torture chamber is trying to do something, while I, sitting in Kyiv, is merely ‘concerned,’ just like European institutions, I am worried, but I keep that to myself and try to understand what I can do,” artist Piotr Armianovski thought aloud. “I was struck by the words of the playwright Natalia Vorozhbyt, who said that in her mind, Sentsov as a personality was joining the cohort of Taras Shevchenko and Vasyl Stus. While reading about Stus in history textbooks, one feels that this is a matter of the past. However, it is happening now. Just like Stus came forward and said that people had to stop acting the way they did, Sentsov is now doing the same. But what about me? In what country do I want to live? Do I want Viktor Medvedchuk to continue in his claimed capacity as Ukraine’s representative for the release of hostages, just like he once claimed to represent Stus in court?” 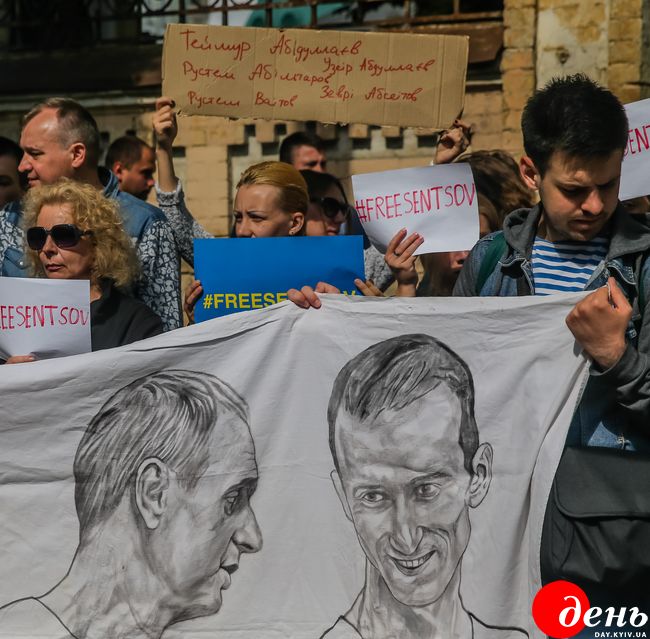 People may say that such events will not in any way affect the fate of political prisoners. But activist of the Crimean Hostages Solidarity Committee Maksym Butkevych offers a strong argument in support of it: “We know for sure that inaction will yield no results. Expressions of solidarity, which are now taking place not only at the international level, not only in backdoor diplomatic negotiations, but also in the streets, as we have many protests and Sentsov solidarity events going on right now – these events are our only hope for changing the Kremlin leaders’ minds to an extent. We understand that there is no ‘silver bullet’ that we can use and immediately get Ukrainian political prisoners released. In all likelihood, we will have to work for that end result step by step. The only difference between the present situation and the previous one is that we have very little time left now.”

The call ‘No more sitting around!’ is aimed not only at those in power. “You know, I have been working to release political prisoners for three years after my own release, and I observe that only every 20th Ukrainian at best probably knows who the ‘prisoners of the Kremlin’ are, while maybe every 10th knows who Sentsov is,” admitted Yurii Yatsenko, one of the first Ukrainian political prisoners in Russia, who had come home in May 2015. “The problem is also in the fact that the Ukrainian public has little knowledge of this subject and cares little about it. Thus, the task of journalists and activists is to popularize this topic as much as possible. In particular, today’s event is intended to attract more attention of the public, the media, and the government so that they eventually appoint a commissioner for the release of political prisoners and improve a bill aimed at providing a legal status and social guarantees to these persons.”

The influence of Ukrainian officials on the release of political prisoners may be limited, but there are practical issues which they are clearly capable of dealing with. In particular, this includes material assistance to the families of prisoners. After all, these people have to raise significant funds to pay for lawyers’ services, parcels and prison visits to their relatives. 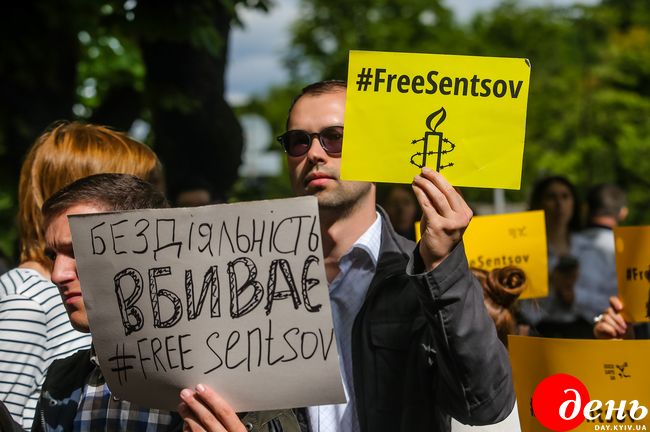 “The main question asked by this event is: what is the government doing? Since I am involved with the government as well [Yatsenko is an adviser to the foreign minister. – Author], I understand how many declarations and appeals are made on the issue of political prisoners every day, including appeals in the Council of Europe made in recent days, and the foreign minister, too, raises this issue at the highest level on every occasion,” Yatsenko continued. “It is also necessary to inform the Ukrainian public that the authorities are not idle, after all. People whom I would call the ‘fifth column’ which fights against Ukraine always strive to emphasize that our government does nothing. Therefore, I always emphasize in my post-release speeches the efforts undertaken on my behalf by the Ministry of Foreign Affairs (MFA), the Commissioner for Human Rights, and the Ministry of Justice.”

“WE HAVE GROWN USED TO DISTRUSTING ASSUMPTIONS”

The international community, too, should be enlightened on the issue of the Ukrainian political prisoners. In a blog post on the website of the Espreso TV channel, journalist and Den/The Day’s contributor Larysa Voloshyna draws attention to the fact that the detention of the Ukrainian citizen Kyryl Vyshynskyi (the chief manager of the RIA Novosti Ukraine news agency, who is suspected of high treason), who was awarded an order of the Russian Federation for assisting with the occupation of Crimea, has aroused concern with the OSCE Representative on Freedom of the Media, the Office of the UN High Commissioner for Human Rights, Chancellor of Germany Angela Merkel, and the International Federation of Journalists. At the same time, according to Voloshyna, the cases of the Ukrainian political prisoners in the Russian Federation ceased to prompt such attention of the global community a long time ago.

“The world is starting to live in the post-law dimension, where equal concern is expressed about the crimes of the occupier and the attempts of the victim to protect itself from the criminal,” the journalist stated. 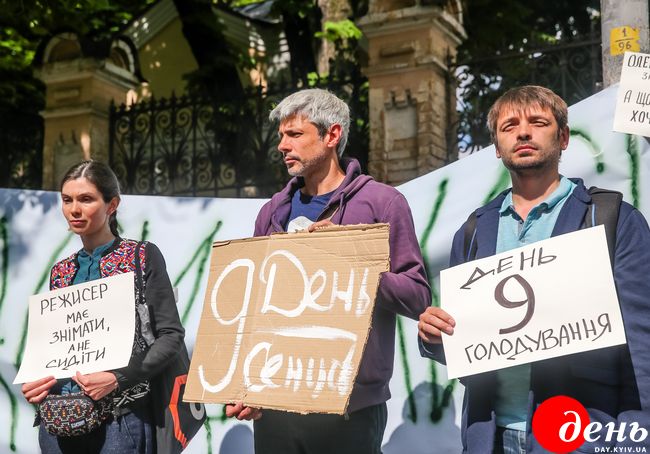 By the way, some sources speculate that Sentsov can be exchanged for Vyshynskyi. For example, spokesperson of the MFA of Ukraine Mariana Betsa said in a recent interview for Hromadske Radio that the ministry was considering such an option.

“There are many assumptions on the matter, some of them may be speculative, others may be justified,” Butkevych remarked. “Just recently, we heard a wave of assumptions that Sentsov and Sashko Kolchenko might be pardoned after the so-called presidential election in the Russian Federation. We have grown used to refraining from hope and distrusting assumptions and speculations over these four years. Frankly, we do not know what can be the most effective [way of getting the prisoners freed. – Author]. We have seen that freeing prisoners through exchanges has been an effective way. These options should be considered, I am sure they are being considered, but they need to be talked about. We see that the third party participation has been effective as well. Let us recall the release of Ilmi Umerov and Akhtem Chiygoz, which would have been impossible without the Turkish leader Recep Erdogan’s involvement. So, we must try and look for intermediaries among heads of other states, representatives of international organizations.”

“CALLS FOR BOYCOTTING THE SOCCER WORLD CUP ARE IMPORTANT”

Sentsov went on a hunger strike a month before the FIFA World Cup, which will be held in Russia from June 14 to July 15. “Should Sentsov, God forbid, get sick, or should critical processes begin regarding his health status, this would happen precisely during the world cup,” Butkevych noted. “Eyes of the whole world would be on Russia because of the soccer event, but people would be unable to ignore the fact that while a soccer festival is taking place, a person is dying in a prison camp nearby. Therefore, calls not to attend, boycott the World Cup, or at least remember where it is taking place – such calls make sense, are very important and in line with, among other things, Sentsov’s calculations.”

Recently, another Ukrainian political prisoner Mykola Karpiuk, who was sentenced to 22.5 years’ strict regime imprisonment in Russia two years ago on absurd charges of participating in the First Chechen War, urged Ukrainians not to go to the soccer event lest they repeat his fate.

Increasingly, social networks are featuring initiatives to attract the attention of fans and soccer players to what is happening in Russia, in particular to the situation with Sentsov. “Sentsov said he could die to create a high-profile event during the World Cup. Together, we can make it a high-profile event internationally without anyone dying,” Starozhytska stressed.

The film director is convinced that everyone can do something: draw posters, repost information and send it to friends in Ukraine and abroad. Starozhytska added: “As they say, we are no more than five degrees of separation away from every major figure in this world. We can only get these major figures interested through joint efforts.”

By Maria PROKOPENKO, The Day. Photo by Mykola TYMCHENKO, The Day
Issue:
№32, (2018)
Rubric:
Topic of the Day