This leader of the Norilsk uprising (Gulag, 1953) would have marked his 91st birthday on August 9
Ivan Kapsamun

Yevhen Hrytsiak passed away on May 14, 2017, several months before his 91st birthday. His life was long and eventful. In fact, this veteran inmate of Soviet prison camps cuts a legendary figure. He was a man of intellect and moral authority, and an old friend of Den/The Day. Characteristically, despite the ordeals that fell his way, Mr. Hrytsiak was a man of the world. He was Mahatma Gandhi’s follower and propagated nonviolent resistance against the existing system, the spiritual development of society and of each communal member. He said that Ukrainians should discard the customary method of using force against force, considering that each time it led to their fiasco.

In an interview commemorating the 60th anniversary of the Norilsk uprising (2013), Mr. Hrytsiak said: “I conceived the idea of nonviolent methods of struggle by groping in the dark. It was after the Norilsk uprising that I started learning Mahatma Gandhi’s methods and those of Hindu yogis, and became a convinced proponent of nonviolent resistance. I realized that all that energy exerted by people when destroying, tearing down, and crushing things does not bode well for them. It is also true, however, that most people simply don’t know about nonviolent resistance. When our barracks revolted, only 2 out of 45 inmates turned out to be scabs. The rest would stand their ground to the end. At a certain stage, keeping all those people under control and preventing acts of violence became very difficult. Otherwise the camp administration would have reason enough to order the guards to open fire. Keeping people from committing acts of violence proved the most difficult task.”

The prison camp revolt in Norilsk (currently in Krasnoyarsk Krai, Russia) began on May 25, 1953, and lasted until August 4, 1953, involving some 20,000 political prisoners, including 86 ethnic groups, and served as a graphic example of nonviolent resistance to the totalitarian system. Historians believe that the Norilsk uprising triggered those in Vorkuta and Kengir, and that it was one of the reasons behind the [Khrushchev] Thaw, the appearance of the Sixtiers, dissidents, and finally the Soviet Union’s collapse. There were over 70 percent Ukrainian inmates during the Norilsk uprising. They struggled for their rights and dignity, using nonviolent methods.

“They say we lack people with moral authority these days. Could be true, considering that people like my father remain to be studied, so to say,” Mr. Hrytsiak’s daughter Marta Hrytsiak told The Day, adding, “During his lifetime ordinary people from our village, neighboring villages and oblasts wanted to meet and talk to my dad. They’d come from various parts of the country. He was a folk and faith healer for some and a clever friend who could give a piece of advice to others. Under the Soviets, he worked as a lawyer, legal counsel and consultant. People would come from all neighboring villages with their problems and my father would always help them – be it a statement, appeal, or a letter from abroad (they would bring it even without being sure that my father knew the language). In some cases people were notified of an inheritance in Poland or Canada, so my father would help them with the required paperwork and tell them what should be done next, which office door to knock on. Everybody knew him, although media people were markedly less interested – except Den/The Day. The editors took a systemic interest in his Norilsk background, philosophy, and life in general. Fortunately, there are still people with moral authority, but like I said, it is necessary to take a closer look at them and hear their life stories.” 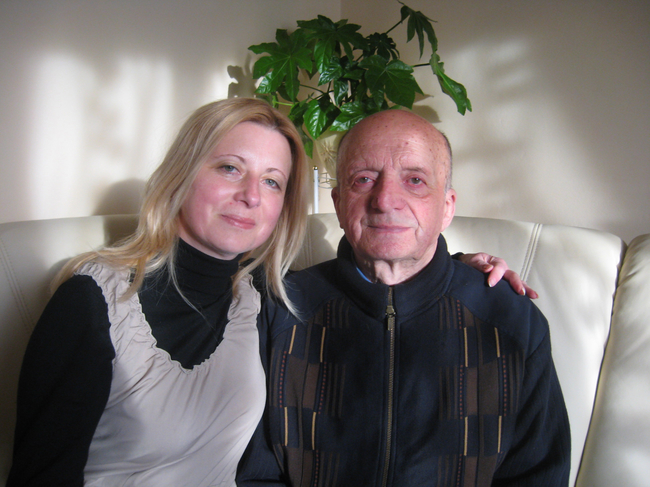 Photo from the private archives

Den/The Day did their best to make the name of Yevhen Hrytsiak known all over Ukraine and far beyond its borders. He would frequently visit the editorial office and the editors prepared dozens of articles about him, his lessons, his high ethical standards, intellect, and worldly wisdom. There were interviews and roundtables with the man who had led the uprising in Camp No. 4. Our journalists visited Mr. Hrytsiak’s home village to make several videos for Project Den-TV – something no major channels seemed to have bothered to do.

Volodymyr VIATROVYCH, historian, head of the Ukrainian Institute of National Memory: “For me, a man of moral authority is one who has gone through some moral and physical ordeals without turning traitor to himself and his convictions – who hasn’t cracked. Yevhen Hrytsiak was such a man. He belonged to a special generation that waged a struggle for national independence under incredibly difficult conditions. Some did with arms in hand, others used nonviolent methods. One would be perfectly correct in describing that generation as one of moral authority. Unfortunately, people keep dying while our contemporaries fail to appreciate the role they played; they don’t often contact them and often fail to properly assess them. This situation should be rectified. After all, we have their works, interviews, and films.”

In fact, Yevhen Hrytsiak didn’t need recognition. Ukrainians did, so they could understand that personality and get closer to his ideas. This is especially true of the younger generation, people who are into politics, who need the right kind of guidelines.

Volodymyr Viatrovych: “One of his most notable traits was his rock solid civic stand. Regrettably, the younger generation of politicians is made up mostly of people who are frail and eclectic, trying to adapt to public preferences. Yevhen Hrytsiak and others of his generation entertained more solid persuasions. He wouldn’t change course due to political circumstances. We are now going through ordeals caused by the war and we can see that the situation is producing an entirely different generation. These people should seek inspiration in personalities like Yevhen Hrytsiak. This will help form a new generation of Ukrainians where we will find persons of moral authority… Yevhen Hrytsiak demonstrated his inner modesty, consideration, and substantiveness (as did Yevhen Sverstiuk, by the way). They never let ambitions get in their way, just as no one would ever accuse them of trying to get any dividends from anything. Thirst for freedom spells energy of sorts. This energy is germane to Ukrainians. On the other hand, any kind of energy can be used in building or destroying something. In other words, energy isn’t enough. There must be guidelines and outlooks that will help people realize that freedom has preserved the Ukrainian identity, but that it has also led to anarchy in the absence of inner discipline.”

Yevhen Hrytsiak regarded his Ukrainian version of Paramahansa Yogananda’s Autobiography of a Yogi as a major achievement. The book had long been translated into many languages, including into Russian, but there was no Ukrainian version. He did the translation and managed to publish it.

Mridula Ghosh, Board Chair, East European Development Institute (Den No. 80, May 15, 2017): “I was impressed by Mr. Hrytsiak’s incredible composure. He looked like one of those saints who are awakened, their eyes shining with the knowledge of values unknown on earth while remaining clear with sincerity, the way a baby looks at you. I couldn’t believe my eyes. There was such a man in Ukraine and the world knew so little about him. He shared his ideas and his knowledge about Hindu philosophy. He was versed in Gandhi, Vivekananda, and Tagore. Such knowledge is seldom found among professional indologists with their impressive academic degrees – even among many people in India. I was moved… Yevhen Hrytsiak was an outstanding Ukrainian who loved his country and never turned traitor to it. His ideas concerning recent events were also amazing. Every word he said was filled with wisdom and there was no desire for publicity, power or material enrichment. His phenomenon remains to be studied within the academic circles. Einstein said about Gandhi: ‘Generations to come, it may well be, will scarce believe that such a man as this one ever in flesh and blood walked upon this Earth.’ I think the day will come when someone will say the same about Mr. Hrytsiak.”