“Poland is and will remain Ukraine’s strategic partner”

About 20 people – artists, human rights activists, and just concerned individuals – gathered near the Pre­si­den­tial Administration in the morning of July 31 to brainstorm new ideas of how to draw the world’s attention to “the Kremlin’s hostages.” The picketers also demanded that public administration bodies and President Petro Poroshenko inform the public about what is being done to save Oleh Sentsov and other Ukrainians illegally imprisoned in Russia and the occupied Crimea, about their condition and the possibilities of exchange or certain arrangements.

“First of all, our goal is a dialog,” the picket’s co-organizer Anastasiia SEHEDA says. “There should be a clear report to the public – not only about behind-the-scenes deals, even if they are really being made. Campaigns in support of Sentsov are very often held now – not every day, as before, but still… We managed to attract more people to this matter and increase publicity. We cannot come, break the bars open and free the people, but we can at least cause a stir so that the matter is discussed not only in Ukraine, but also abroad.” 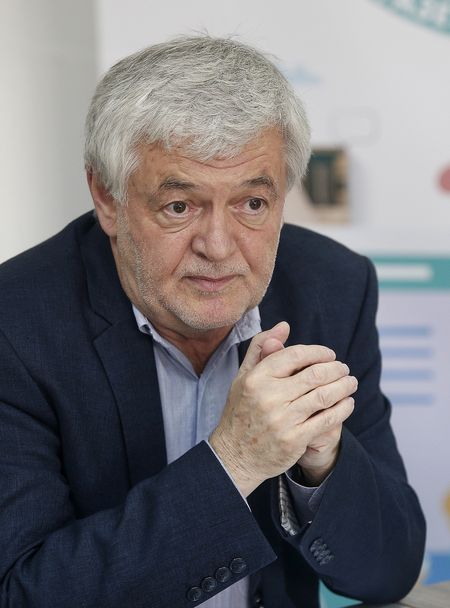 There were not many picketers due to either the heat or the vacation season. The upside is that this topic still remains interesting to radio and newspaper journalists – about 15 of them – came with cameras.

“I think it is especially important to draw attention to this topic in the off-season and at a time of vacations. Sentsov is still on a hunger strike, he has no vacations,” Mariia TOMAK, a coordinator at the Human Rights Media Initiative, emphasizes. “We know that Oleh agreed to take at least a few spoonfuls of nutritional mixture a day. But, of course, this is not enough for one to survive or function normally. Sentsov in fact continues his hunger strike, and we see no encouraging signals that he may be freed in the immediate future. At least, we don’t know about this kind of signals.”

Human rights activists are trying to appeal to international organizations, but they also remain silent. “The latest large-scale event occurred in Helsinki – the summit of presidents Trump and Putin. There’s a dead calm now, and we want to hear ideas from society,” Tomak adds. The human rights activist recalls some ideas she saw in social media after the campaign had been announced, such as the proposal to exert pressure on the European Court of Human Rights, which is still to hand down a ruling in the Sentsov case, and the idea to invite the President of Ukraine to Labytnangi, where Oleh is serving his term.

“Our diaspora in Switzerland and France has taken an interesting action: when Sentsov went on a hunger strike, they chose a day and began to jam the switchboards of the Russian consulates in those countries. Phoning there, they asked the same question: ‘When will Oleh Sentsov be freed?’ I think we can organize sort of a large-scale campaign to mark the anniversary of the conviction of Oleh Sentsov and Oleksandr Kolchenko,” Tomak says. The upcoming anniversary of the conviction is on August 25.

Another “greeting from France”: a portrait of Sentsov was hung at the Paris city hall’s facade on July 30. The city mayor Anne Hidalgo supported this action.

Last week the Cabinet of Ministers resolved to disburse a lump sum of 100,000 hryvnias to the families of the Ukrainians held in Russia for political reasons. “I think this should have been done long ago,” Tomak comments. 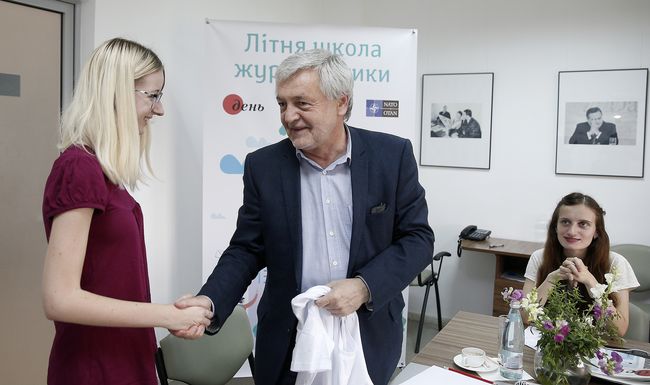 At the same time Ihor Hryb, whose son Pavlo was illegally arrested in Russia, was appointed to chair the department that deals with people deprived of personal liberty at the Ministry for Temporary Occupied Territories and Internally Displaced Persons.

“We have also lobbied the establishment of the department Ihor Hryb chairs, but this is sort of a tactical structure which is supposed to be responsible for monitoring and collecting information for sanction lists, maintaining contact with relatives, etc. This does not resolve the problem of the absence of a negotiator. Hryb will not be dealing with this or searching for the ways of liberation,” Tomak says. “So this problem remains topical, for we can see that this question is not being discussed anywhere. Russia won’t meet our demands just like that, but we must pressure it. The point is that this question [of ‘the Kremlin’s prisoners.’ – Author] was not raised in Minsk. We know Russia’s attitude – they claim they are observers in Minsk, where only the Donbas is being negotiated. OK. But I don’t see the reason why it is impossible to exert pressure on Russia via our Western partners and force them to speak, for example, about the humanitarian situation in Crimea and the release of the people illegally detained in Crimea and Russia on a certain alternative platform.”

ENVELOPES WITH A PORTRAIT OF SENTSOV

Some well-known people are also coming up with the ideas of supporting “the Kremlin’s prisoners.” For example, writer Andrii KURKOV suggested in Facebook making postage stamps, a part of the proceeds of which could be used to help the families of the Ukrainian “prisoners of conscience” in Russia and Crimea. “Several times in my life, I’ve come across stamps whose price was indicated as a common mathematical formula without the ‘equals’ sign, for example, ‘3 crowns + 2 crowns.’ This means that the stamps were issued both as a means of postage and a means to raise funds for a certain good purpose. In other words, the second part of the value was intended for public good. And I thought: it would be a good idea if Ukrposhta [Ukrainian Postal Service. – Ed.] issued a series of stamps with portraits of the Ukrainian political prisoners who languish in Russian prisons and the inscription ‘3 hryvnias + 2 hryvnias’ so that every two hryvnias could be used to help the family of a political prisoner. Besides, such stamps could be stuck to all the envelopes with letters sent to Russia so that Russian citizens could also know by sight those whom the Kremlin kidnapped and is trying to kill slowly,” Kurkov wrote.

Interestingly, Ukrposhta immediately responded to this call. The company Kurkov also referred to on his Facebook page answered that the current Ukrainian law does not allow issuing this kind of stamps, for they carry an additional tariff. However, the answer says Ukrposhta has long been toying with this idea and, hopefully, the Provision on Postage Stamps will be updated this very year, which will make it possible to issue charitable stamps.

“EVERY UKRAINIAN MUST RISE”

It is for about a month now that filmmakers have been carrying out the project “Reading Oleh Sentsov’s Stories Out Loud.” Everybody video-record an excerpt from Sentsov’s book Short Stories and then make a big video out of these clips. Quality is not the object – you can simply put a phone with a switched-on camera in front of you and make a recording. The video is to be sent to the email address [email protected]. Well-known Ukrainian, Polish, and British actors and directors are taking part in this project. Incidentally, girl students of the newspaper Den’s Summer School of Journalism also made this kind of video in July.

“The main thing is that people now show interest in Oleh as not a person on a hunger strike but an artistic personality who must be freed from prison and continue his pursuit of art,” film producer Anna PALENCHUK says about the “Out Loud” project. “I hope Oleh will be released tomorrow and we will no longer gather here. We’ve been always expecting him to be freed very soon. Naturally, we will be making the final video, and not only the video, in order to constantly speak about Oleh and draw the attention of both the authorities and the public.” Incidentally, Anna, who knew Sentsov even before his imprisonment, is working together with director Tamara Trunova on staging his play Numbers. The premiere is scheduled for November.

Anna says Oleh is very principled and believes firmly in certain ideals. “And it is not about his persuasions – it is about our common values. It is the values of freedom, the values of this country, it is about the fact that Crimea, Oleh’s homeland, is occupied,” the film producer continues. “I think that, from this angle, Sentsov is each of us. And when we all come to understand this, we will free him. There must be much more of us. Every Ukrainian must rise to free our citizens.”

It will be recalled that, according to human rights activists, at least 70 citizens of Ukraine are being held in Russia and the occupied Crimea on politically motivated charges. Out of them, Volodymyr Balukh and Stanislav Klykh have been on a hunger strike for over 140 days and over two months, respectively.

LOOKING FOR NEW OPPORTUNITIES AND PROSPECTS

Mykola SIRUK: “Anything you’d like to wish or suggest to our young journalists?”

“The best of success, so you learn to understand this world your own way, not the way the Russian Federation would want you to, for example. I vividly remember the time when I was a young journalist working for a local newspaper in Krakow. Today, young journalists have far more opportunities to improve themselves professionally. Last year you received the best present ever, visa free travel, so that any Ukrainian with a biometric passport can visit Spain, Poland or any other Schengen country. This freedom changes one’s world outlook. I remember visiting Zaporizhia during the Orange Revolution in 2004. I was an observer during the final round of elections when it was Yanukovych vs. Yushchenko. Under the law, observers from all political parties were to be there, but there weren’t enough members of Yushchenko’s party, so observers had to be invited from Lviv and Ternopil oblast. It was their first visit to Zaporizhia and they were afraid of being attacked and murdered by pro-Russian residents. This never happened. They met, shook hands, came to terms, toasted each other with vodka, and exchanged home addresses. That was how contacts were established. Those were forcibly free contacts, but they could travel to Lviv, elsewhere in Ukraine, looking for new opportunities and prospects. Such free contacts change one’s views on the world, Europe, and universal human values. I wish you to think using these categories and make a conscious choice. After you write a book, a novel, I hope I’ll read it and then start looking for a Polish translator...”