“What is happening to us is the result of our failure to learn from history!”

What was discussed by participants of Larysa Ivshyna’s meeting with student youth, cultural and educational figures during the opening of Den’s Days in Volyn

On May 18, Lesia Ukrainka Eastern European National University hosted a presentation of the best photos of an international photo competition and an already traditional conversation between concerned citizens and Den/The Day’s editor-in-chief Larysa Ivshyna. At the beginning of the dialog, she remarked that she would like to communicate with people who were really interested in the topics offered for discussion. The crowded conference room of the university library was pleasingly full, but the speaker wanted communicative feedback as well. And the audience was not just attentive, but quite inquisitive too. Moderator of the conversation, the university’s vice-rector Anna Danylchuk, saw several people at once raising hands to ask questions.

So, they talked about...

As Ivshyna admitted, she always found Den’s Days in her home region of Volyn, which had started there already for the 13th time, to be accompanied with a special feeling. It was yet another homecoming for her, because “everyone feels the desire to repay debts as one remembers the efforts that people once invested in one. Every time, I want to see how my countrymen live, whether they are interested in the exhibition that has been coming to the university for years.” But this year, our editor-in-chief did what she had been intending to do for a long time: on the eve of the presentation of Den’s Days, as she was on the way to her home town of Lokachi, Ivshyna visited the Viacheslav Lypynsky Memorial Museum in the village of Zaturtsi. Den was among the first to tell about this museum, and our website Ukraine Incognita (incognita.day.kiev.ua) features a virtual tour of the museum. But, as Ivshyna says, it is important not just to look at the exposition, but to see it precisely in Zaturtsi, in the restored former ancestral manor of the Lypynskys, still partly surrounded by a 150-year-old park and preserving trees under which Lypynsky once rested, and the mansion’s overall atmosphere. 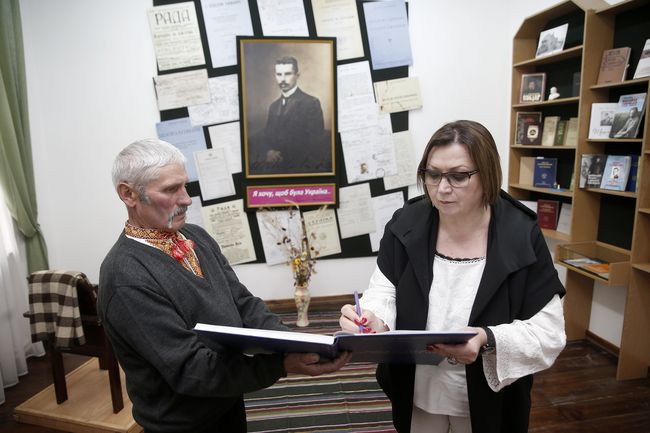 “My path to Lypynsky was a rather long one. I had to intellectually mature before visiting this museum. And today, I advised head of the Volyn Oblast State Administration Oleksandr Savchenko, who came to the opening of the photo exhibition, to make sure to go to Zaturtsi, because he is new to Volyn. The leader’s presence in a certain place is always a signal to others. Do you rank rich people in Volyn?” Ivshyna asked. “I ask it because these rich people have done nothing to repair the derelict facade of the Lypynsky Museum in Zaturtsi... We do not know how history will judge these people, but it has already judged Lypynsky well. One hundred years later, he is even more relevant and in demand, and not only for Ukraine, as evidenced by the museum in Zaturtsi receiving requests for information from Austria, Germany... And if we still have not managed to discern what matters to us, then it is we who have a problem, and not Lypynsky! But we do have a minor excuse: when we were attending school, they did not teach us the history of Ukraine, there was only the history of the Ukrainian SSR, and even that was taught only a little. What we supplemented our knowledge with was coming from relatives who preserved family stories and kept us from falling under the influence of propaganda too much.

“But now our woes have changed shape. Then we searched for samizdat publications, looked for tiny bits of information. And now, information comes in an avalanche. But is there a desire to figure it all out, to form a guidebook for oneself: what to study, what to find? Therefore, I urge you to go to Zaturtsi, just to help the museum to clean up the old park, to work for such a sublime name. And then, you will be able to explore the legacy of Lypynsky in a more meaningful way as well. What is even more significant for Volyn than this mansion museum? We need to expand the space of intellect. One can read about Lypynsky, see photos in albums. But when one looks at them in an authentic environment, in the house where this noble family that did Ukraine a lot of good lived for generations, this is perceived differently, and one comes home with new spiritual reflections.” 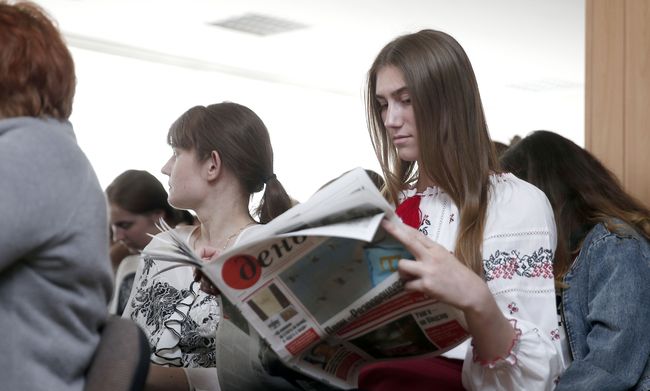 “Maybe we need to immerse ourselves less into history, and solve today’s problems instead?” – this question, posed to Den’s editor-in-chief by student of the philology and journalism department, publishing major Maksym Kravchuk, was not, as a matter of fact, as provocative or trivial as it might look. This is a relatively widespread view among the general public.

But the audience accepted Ivshyna’s reflections, because “what is happening to us is the result of our failure to learn from history, which punishes us for unlearned lessons.” Den’s editor-in-chief put forward arguments including the significance of the 100th anniversary of Hetmanate, which was, as it were, on the sidelines of the government’s attention, the difference between the attitudes towards Pavlo Skoropadsky in Ukraine on the one hand and Carl Mannerheim in Finland and Jozef Pilsudski in Poland on the other, where society appreciated their professional level and the desire to work for their respective nations. Meanwhile, Skoropadsky was forced into exile... Many answers to the question “What do we need history for?” can be found in Den’s book publications, in particular, The Crown, or Heritage of the Rus’ Kingdom, which was presented in Lutsk and which has already gone through three editions. 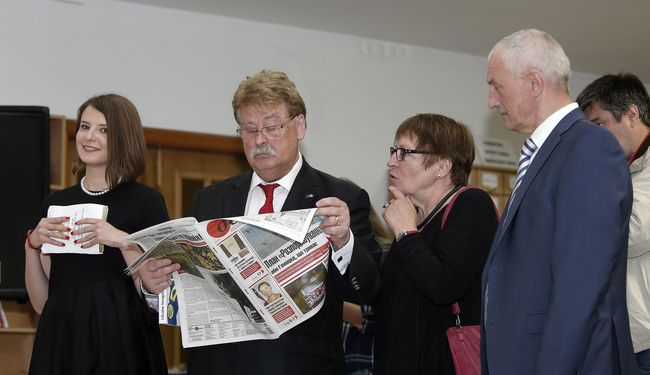 Those present also talked about the destroyed Ukrainian elite, without which the people, in the words of Ivshyna, is “like a headless chicken,” about the Maidan and the Revolution of Dignity, our desire for anarchy, and the reluctance to listen to a calm conversation rather than a shout over a megaphone, about the barbarian gene, revived by the loss of the elite and the opportunity it presented for some people to rise over the “masses,” even if temporarily, and the question of our development capabilities or lack thereof.

Anton Beznosykov’s statement from the floor that he, while having almost all the books of Den in his home library, was unable to obtain a copy of The Power of the Soft Sign, as well as people’s reaction to Den’s editor-in-chief’s position on history issues, testify that the layer of those who understand the meaning of history lessons is growing, thanks to Den’s efforts, among other things. Beznosykov was able to acquire the last remaining copy of The Power of the Soft Sign which was presented during this discussion. By the way, he asked as many as three questions of Ivshyna: about her attitude towards philanthropist Yevhen Chykalenko and human gratitude in general, why were there not enough books like The Power of the Soft Sign, and, finally, why was she putting so much effort into convincing people of the need to learn history lessons, why was she enlightening the masses for years? After all, understanding and gratitude are not always there. 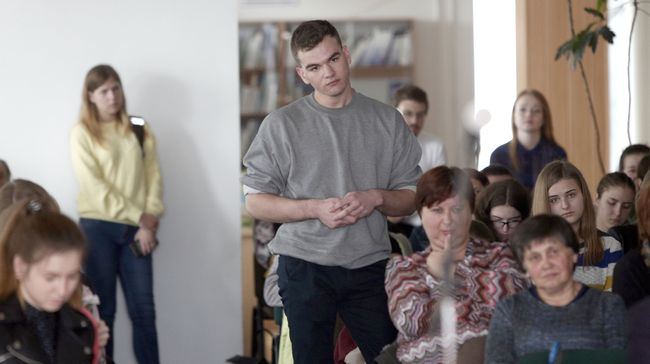 Ivshyna called ingratitude a “slavish feature,” while gratitude a “nation-growing force.” The path of enlightenment is not easy, but it is a life choice.

...Who needs bread and newspapers?

The question of “how soon will the paper press die” caused great agitation. Judging by the audience’s response, it liked Ivshyna’s phrase that “Ukraine today is a lot of hamlets in combination with high-speed Internet.” And although it concerned a slightly different topic, not the media, but our mentality and our desire to move forward in general, still, the virtual world has, without doubt, already won many Ukrainians to its side.

Ivshyna said that we had been hearing steady warnings about the death of the print media. But life poses other demands. Den’s editors have been supplying the newspaper to front-line districts of eastern Ukraine for free, as a volunteer contribution. “People ask for bread and... newspapers! And this is an indicator,” Den’s editor-in-chief said, pointing to the opinion of British Prime Minister Theresa May about the disappearance of even one media sector being a loss for democracy. “It is necessary that all intelligent sectors exist,” Ivshyna asserted. “It is so because a person with a newspaper, a person with a book is a completely different person than a person without a book. And I would like the book person to dominate in our society!”