Enlightenment, the Editors’ watchword, along with comments by regular subscribers, Summer School of Journalism graduates, contributors, and Editor-in-Chief

The first issue of Den came off the presses on September 11, 1996. Today’s issues of Den/The Day are very different in terms of makeup and design, complete with color photos, being more compact, using various fonts. It remains Ukraine’s first periodical to have started being published with online versions. Beginning in 2012, every Friday issue has had a glossy supplement entitled “Route No. 1,” featuring historic and cultural sites, along with other tourist attractions.

Den became a major media brand, including the unique education projects Summer School of Journalism and Library Book Series (this year’s Book Forum in Lviv will boast the 35th book entitled “Ave. Centennial of Hetman Pavlo Skoropadsky”) and the International Photo Contest (this year it will be held for the 20th time).

With all upgrading, the Editors remain true to their credo: intellect, truth, and principle.

Below are comments by regular subscribers, Summer School of Journalism graduates, and Editor-in-Chief Larysa IVSHYNA.

DEN ALLOWS ONE TO GLIMPSE THE FUTURE

“I’ve long subscribed to Den and I can’t imagine myself without a fresh issue in hand. Your periodical offers systemized data and allows one to figure out the situation that has developed; it offers contact with people who are living the Ukrainian way, who are moral authorities. I’m personally interested in features dealing with history, also writers, historians, scholars, and economists’ comments. Experts on economy sometimes come up with useful recommendations; they tell you what you should do to cope with these troublesome times. Ukraine is at the international crossroads. There are more questions than answers. What will happen tomorrow? What should be done to make our economy work, protect ourselves against political corruption, and keep our financial system in one piece? Den offers answers to these questions and, most importantly, allows one to glimpse the future, offering features that deal with various walks of life, various problems ranging from the new Ukrainian schools to healthcare reform with its challenges and consequences. Your periodical offers data that allows one to find answers to certain questions. My daughter is an English teacher. She wants to know what’s new, what’s happening elsewhere. She reads your newspaper and receives this information. Sometimes my wife reads it, too, and often shares what she has read. My congratulations on Den’s anniversary and best wishes for your team and personally for Ms. Ivshyna, with whom I met in Vinnytsia this year. I’m proud that we have a Ukrainian newspaper meant for Ukrainians.”

LOTS OF MATERIAL USED IN CLASSROOM

“Den is one of the best periodicals published in Ukraine, in terms of an intellectual and analytical approach to our history, current realities, and the building of a future united Ukraine. I refer to your coverage of various public and civic spheres: economy, culture, language, religion, and national history. For many, including yours truly, Den is an eye opener on history, a valuable source of information on a number of issues that have been topping the Ukrainian agenda for thousands of years. It’s good that your newspaper refers to Kyivan Rus’ (which this year marks its 1,180th anniversary). Recent research papers relating to Byzantine, European, and Arab archives, demonstrate that a powerful state under the name of Rus’ became known, back in 838 AD, in Europe and what is now the Middle East. Den carries features that illustrate the Ukrainian people, its problems and progress, since the time they were referred to as Rusichi. I use lots of such material in my classroom. I can only congratulate Editor-in-Chief Larysa Ivshyna on her talent, I mean her singular ability to put together a team of young gifted people who write so well, which is graphic proof that this periodical is keeping high intellectual and moral standards, helping the audiences to assert their national identity. Now that we’re facing another election campaign, even if officially undeclared, Den is serving the people by providing truthful information about what is happening in Ukraine. I wish your Editors, the staff, the best of success, a hundred years for you and your close and dear ones; may Jesus support you in your effort to assert a united Ukraine.” 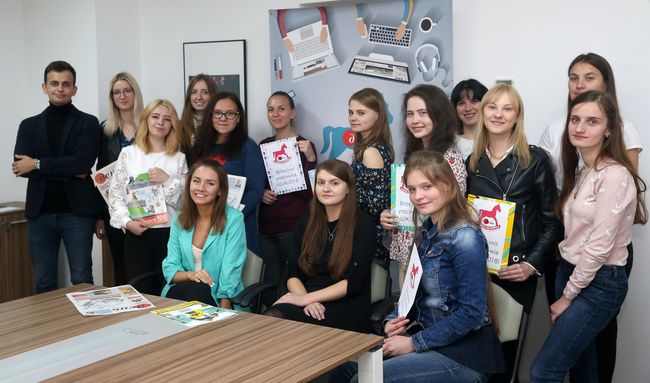 “The system of coordinate in which I live”

“They say at the Kyiv-Mohyla Academy that time is passing us by, but the Academy is eternal. This best describes my attitude to Den. I’ve spent ten years as its student, five years as a subscriber, and the last year as a contributor. This is my personal experience and I’m proud of it. The system of coordinate in which I live. Happy birthday to you, my beloved intellectual Den!”

DEDICATION TO THE NATION

“Happy birthday to Ukraine’s daily Den! I was 18 when I first read your newspaper and realized that it was Ukraine’s leading periodical, that the Editor-in-Chief, Larysa Ivshyna, was a top-notch journalist. I hope my small post will convey my heartfelt message. I want to thank you for your dedication to the Ukrainian nation, for your Herculean effort over the past 22 years; for your generous sharing of your professional skills with young journalists. I wish your newspaper every success and I’m sure that you will come up with new interesting projects.”

“Congratulations and best wishes for the staff and, personally, for Editor-in-Chief Larysa Ivshyna! I am 18 and Den is 22. Strange as it may seem, I started reading your periodical only three months ago, but quality comes first and quantity second. I’ve just read Ms. Ivshyna’s post that has these lines: ‘The only hope is that it would have been worse without us.’ Indeed, my life would’ve been worse without reading Den. My mother isn’t happy about my majoring in journalism, yet she told me recently that she couldn’t imagine another day without my stories about Den and without seeing the next issue, adding that reading your newspaper made her hope for a better future for Ukraine. Thanks to Den, I learned true journalism and I now see my own coordinate system and believe that one’s dreams can come true. I wish you all to keep up the good job, helping people change their life for the better, and I hope that other media outlets will follow your example. Finally, I want to thank you all for having this opportunity of joining you in what is for me your first anniversary.”