“You want a compliment or the truth?” asked an expert after the launch of another project in the All-Ukrainian School UF Incubator StartUp Week Finals.

In fact, experts and potential investors were frank and friendly. Ten teams of senior high school students had spent a week working on inventions before submitting them to the jury – a board of experts. The event took place at the UNIT.City Park of Innovations in Kyiv. Below are brief interviews with some of the contestants and members of the jury.

A total of 27 senior high school students were selected for the first government-run business school known as UF Incubator, based on the Small Academy of Sciences of Ukraine. The organizing committee selected most interesting and practical innovative projects dealing with the economy. The contestants were divided into teams, each made up of the author of the project, a financier, and a marketologist.

The first challenge was to quickly put together an effective team, considering that its members were total stranger. Business trainers, scholars, and market experts spent a week coaching the teenagers. Their main task was to teach them lean production [a systematic method for waste minimization – aka Muda – within a manufacturing system without sacrificing productivity – Ed.]. 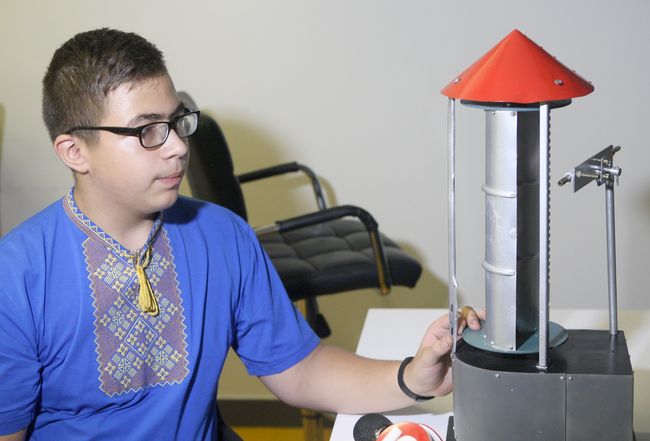 Vitalii LISOVYI, Project UF Incubator Coordinator: “The kids met within the project’s limited time frame. They prepared their startups, using their projects. Today, we have prototypes, I mean effective solutions. Our children don’t make scholarly presentations like during an inter-college intellectual competition. They submit their projects to the potential investor. Our emphasis is on teaching them to think business, to sell and defend their ideas. Among our tutors was an expert on intellectual property rights. Our project isn’t about scholarly projects. It’s about starting in business, being prepared at an early stage. Expert opinions during the finals will help some upgrade their projects or work out new ones. Each team has been invited to take part in the international forum Innovation Market.”

Viktor DOLGOPIATOV, Everest Group of Companies, was very impressed by the three high school students’ Project Explore Your Mind in the UF Incubator StartUp Finals. Its neural network selects music for videos and even generates a new track: “The whole idea is really great!” 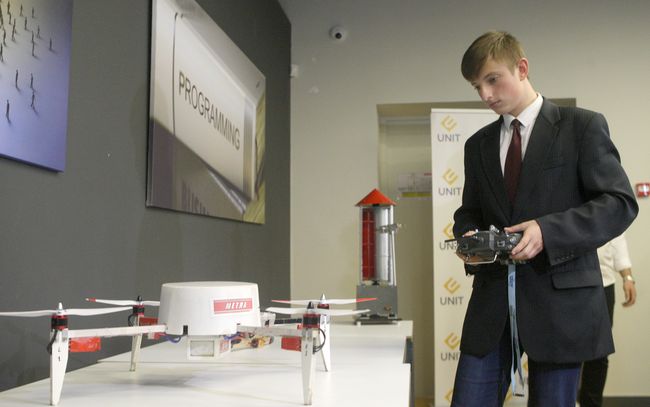 His team members are into music. Nazar plays the piano and composes electronic music. Mykola plays the ordinary and button accordion, and is learning to play the guitar. Yulia is attending a music school, majoring in the guitar.

Mykola Lysenko: “A number of project authors have upgraded their ideas this week. Our Project Explore Your Mind was first meant for scientists, but then it occurred to us that it could be used by bloggers in the first place. Just imagine them using and advertising it! We could become as popular as a first class TV show!” 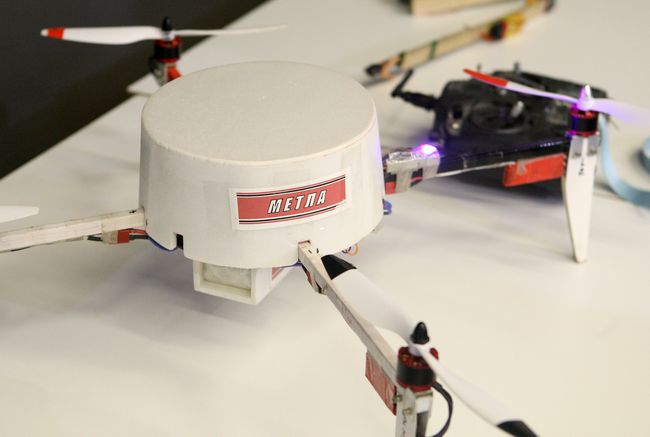 Nazar adds that the idea was conceived a long time ago, when he started thinking about the kind of music that would best reflect his sentiments and his attitude to what was happening around him. Then he shelved it – until there appeared music-composing programs. It was then he realized he had to keep working on his project, upgrading it, including his own audio or video track.

Mykola Lysenko doesn’t hide his enthusiasm: “Our product has no analogs and it can be implemented technologically. If we don’t do this now, someone else will do it, in six or twelve months.”

Yulia Salii, the team’s marketologist, says that the blogger’s profession is a product of the 21st century and that their project will help it: “I once helped a blogger, editing his videos. It was really tough. The music would be good, but the lyrics would be way behind, or the other way around. Also, I couldn’t use my playlist. I had to make do with what was considered a top hit that best fitted the video.” 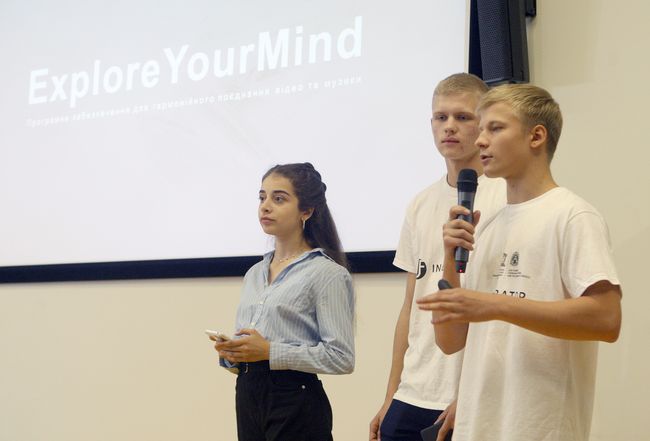 Nazar says there are lots of similar programs and that all it takes is reconfiguring them a bit, unifying them, and producing the final neuro network model that will integrate all music and video characteristics, ending up in harmony. Probably the biggest project would be one with a database with top commercials, music, and characteristics analysis. Nazar wants freelancers and teenagers for his project.

Anatolii KHRAMCHENKO, Shostka, Sumy oblast, demonstrates a WI rotor wind turbine model. It can be used on modern highways. The way it works is simple: the speeding cars create a wind stream, the generator rotates, and the mechanical energy is converted into electricity. Anatolii proposed a generator made of vinyl plastics, but after the launch and after hearing experts say that it would be a long time before his device paid off, he will most likely look for other options.

In his own words, “alternative power engineering is quite popular. The wind turbines are expensive and what I propose is a relatively inexpensive analog. The government could install such rotor wind turbines alongside highways. Private home owners could have several such turbines on the roof and this would save them money in terms of electricity bills. One such turbine mounted by a highway could generate electricity enough for a home, depending on the traffic, of course.”

When working on an innovative project, team work is about as important as the innovative idea. According to Viktor Dolgopiatov, “the idea may turn out to be not so good, but the team will remain top-notch. If you can keep this team working in the right direction, the result will be rewarding. There are also cases when the idea is as bad as the team working on it, yet the people are determined to achieve some results. In such cases you have to figure out what has brought these people together, what’s making them work on their startup. Take a look around. Same economic dislocation. Nothing has practically changed behind the official, outwardly attractive, facade over the years. What will happen in 20 years if we don’t start investing in our future now? Half the people on this planet are talking Mars, and we keep talking street market potatoes, that the price is up today, compared to yesterday. We have to start paying serious attention to such issues now, because we’ll have no time for this later.”

Oksen LISOVYI, Director, Small Academy of Sciences of Ukraine, says UF Incubator is in possession of the former Movie Theater Yerevan on Chokolivskyi Blvd., that paperwork is in progress, aimed at revitalizing the premises, that repair is underway and is expected to be completed before September 2019. Also, there is hope for receiving funds from the state: “This is a state-budget-financed project. We’re waiting for the 2019 budget bill [to be passed by parliament]. We hope that it will be financed by the state. We’ve done all the legally required paperwork and we have our Prime Minister’s support.” 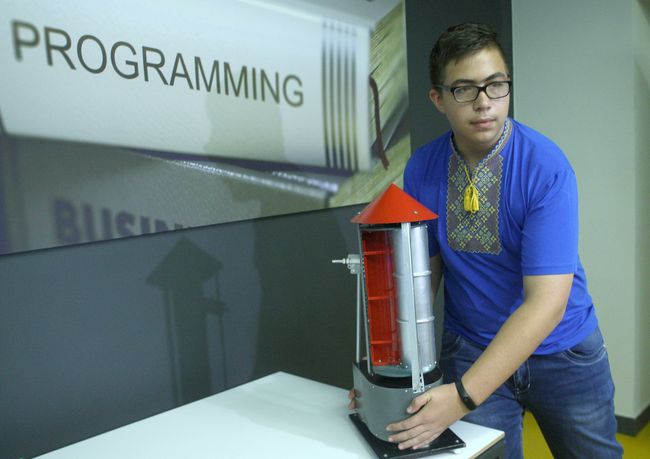 A total of 32 teams of high school students are expected to be handled by UF Incubator on Chokolivskyi Blvd. this year.

Oksen Lisovyi: “The younger generation, properly trained, is the main purpose of the Small Academy and UF Incubator. This project is aimed at producing individuals with a higher IQ. The current event is being held in a friendly atmosphere, but we’re making our priorities clear; we need the kind of experience our children will need in order to implement their ideas. Our children can receive this experience in high school, before enrolling in college/university, before receiving their academic degrees and embarking on their first startups, aged 25-27, and confronting unfriendly investors. In other words, our children stand a chance of winning success much earlier than their peers outside our project.”