“The actions of law enforcement regarding Mikheil Saakashvili have raised the stakes. It will be difficult to find a neutral way out now,” a political analyst believes

War? What war? Judging by the newsfeed, the number of dead and wounded at the front occupies a modest and almost obscure position on Ukrainian public’s mind. People take far more interest in Saakashvili-on-the-Roof’s exploits with a bottle of mineral water and a disheveled haircut, which forced rescuers to spread out a life net on the ground because he allegedly was threatening to jump down. Yes, Ukrainians had another opportunity to see for themselves that the authorities have a proclivity for suicide. Moreover, they learned that the opposition politician Saakashvili did not live in the tent city near the Verkhovna Rada, where he had pictures of himself taken and even stated that he had nowhere to live, so Mariinskyi Park remained as his only refuge.

Strange as it may sound, but it was Petro Poroshenko who created the “Ukrainian Saakashvili.” This is his almost self-inflicted phenomenon, which exists independently of Saakashvili the president of Georgia, a country that has suffered from the Russian Federation’s aggression and simultaneously offered an example of certain reforms. Saakashvili in Ukraine was initially a “friend” of Poroshenko, who was issued a Ukrainian passport for some specific missions as if it were some kind of a piece of paper, an Ausweis, but then he turned into a hated opponent and a living reproach to the unwise step taken by the head of state.

On the other hand, did Poroshenko really want to see Saakashvili in Ukraine? Judging from a recent interview with strana.ua, the latter said openly that his presence here was not desirable for the head of state during the inauguration. This is just a minor detail, but it can hint that the former Georgian president’s presence was imposed on Poroshenko.

The authorities have shown themselves to be helpless as they fail to detain Saakashvili time and again, while Saakashvili, who still has no place to go and nothing to lose, seems to be mocking those who are trying to destroy him. Mikho responds to his passport being annulled by breaking through the border, and answers the expulsion of his Georgian friends with PR events outside the parliament building and marches. Saakashvili is a fixture on TV screens, with the channels which show him being “blocked” so “efficiently” that they are increasing their viewership shares even faster than before. 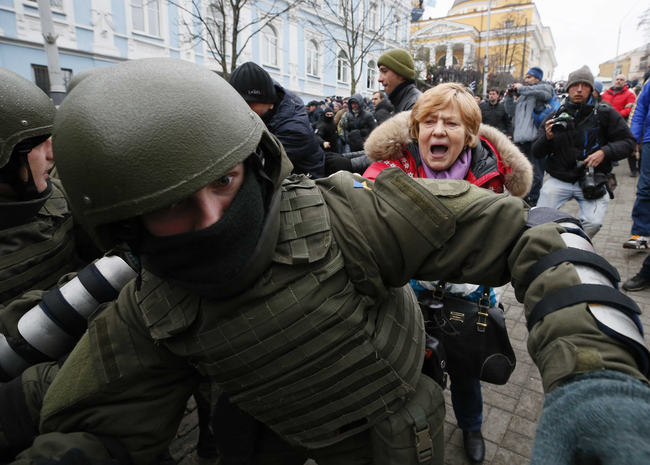 All this could be seen as a case of political ruckus, an elite showdown, if not for the fact that while the high and mighty people are quarreling, entire state institutions are really being destroyed in Ukraine. Like the institute of citizenship, for instance. Poroshenko gave Saakashvili a passport and took it away as if it was his personal toy, while thousands upon thousands of Ukrainians wait for months to receive that document.

It seems like this “smart regime,” which knows how to manipulate the public opinion, is no wiser than its predecessors, although it seemingly has had ample opportunities to learn from their experience. Viktor Yanukovych was said to be fearful of appearing weak because of his background as a typical Donbas lowlife, and therefore, he persecuted Yurii Lutsenko, Yulia Tymoshenko, and others, thus allowing them to obtain growing public support. Poroshenko, who speaks English perfectly, and probably considers himself a first-class diplomat, has a strange way of dealing with domestic matters.

Instead of reaching out to the people with specific achievements, Poroshenko, probably having paid attention to the marches that were gathering thousands of participants every time, made another controversial step by trying to detain his opponent. And this is despite the fact that in parallel with it, the public is watching the confrontation unfolding between anticorruption bodies, which looks more like an alternative to fighting corruption.

Prosecutor General Lutsenko did not go to Washington, where he would have to show Americans the “successes” he had had in a difficult war on corruption. He sent his deputies instead. Meanwhile, head of the National Anti-Corruption Bureau of Ukraine (NABU) Artem Sytnyk and head of the Special Anti-Corruption Prosecutor’s Office (SAP) Nazar Kholodnytskyi have both made it clear that they have strong support from the West. Let us recall that the chief US representative in Ukraine Marie Yovanovitch stated her support for the NABU and SAP employees and high appreciation for their work. Also, the US State Department expressed concern over other law-enforcement agencies disrupting the NABU’s special operation and stated that such actions “undermine the independence of anti-corruption institutions.”

After the attempt to detain Saakashvili, the absence of Lutsenko in America can be explained by more “important” matters he has to attend to in Kyiv. Before that, Lutsenko accused the NABU at a press conference of holding a non-competitive selection of agents and other “sins,” such as provoking an official into receiving a bribe. In its turn, the NABU officially responded to Lutsenko’s allegations and stated that according to the requirements of the Law “On the National Anti-Corruption Bureau of Ukraine” and the Law “On Investigative Work” and in particular, Art. 8 of the latter, investigations may involve both overt and undercover employees, full-time as well as part-time ones. “The selection of full-time investigators is carried out, as well as in other units of the National Bureau, on a competitive basis, but it also takes into account the requirements of the Law ‘On State Secrets.’ The basic principle of investigative work is unconditional secrecy of measures being taken,” the NABU statement reads.

Techniques used by the NABU in our legal jungle may be really not that sophisticated, but Yovanovitch’s statements prove that the US needs feedback from Kyiv. And so far, this feedback is provided to it by the SAP and NABU. The head of the latter directly pointed out that his structure worked directly with the FBI. Given the Panama offshore scandals, it is not surprising that these bodies are, to put it mildly, a hindrance for the authorities. But the problem is that in this whole confrontation, it is political dominants that win, instead of the law.

But in the end, what does Saakashvili stand accused of?

Leader of the Movement of New Forces Saakashvili is suspected of assisting members of criminal (!) organizations and concealing their criminal activity. It is this wording of its claims and accusations that has been chosen by the Security Service of Ukraine (SBU). The Prosecutor General’s Office (PGO) added new accusations to ones made by the SBU. “I am making public the first part of the joint operation conducted by the SBU and the PGO to derail the pro-Kremlin forces’ plan of staging a comeback in Ukraine,” Prosecutor General Lutsenko said at a briefing. “It concerns the cooperation of a number of politicians, first of all Mikheil Saakashvili, with members of the criminal grouping led by Yanukovych, first of all Serhii Kurchenko, whose money was used by Saakashvili and persons close to him to finance the protest events initiated by them, the purpose of which was to seize state power in Ukraine.” In other words, according to Lutsenko, Saakashvili is an agent of the Kremlin. Before that, Saakashvili was accused of providing inaccurate information about himself when obtaining Ukrainian citizenship.

“One must understand that the actions of law enforcement regarding Mikheil Saakashvili have raised the stakes, and it will be difficult to find a neutral way out now,” political analyst Petro OLESHCHUK told The Day. “Having made such accusations against Saakashvili, the Ukrainian authorities cannot simply deport him, because he stands accused of serious crimes against the state. Accordingly, they must be proved. If they will not be, it will be a blow to the prosecutor general. Pretending that nothing happened will not work. At the same time, law-enforcement officers keep the events of the Maidan on their minds, and, accordingly, this affects their actions. They think that if there is a change of government, they will be held responsible once again. Therefore, we see that they cannot even detain Saakashvili. And the government itself, on the one hand, is seeking to put pressure on its opponents, but on the other, it is abdicating responsibility.”

So far, the authorities have been trying to place Saakashvili under home arrest, and failing. This forces one to question professionalism of the services involved. “The situation is problematic because ignorance shown by power-hungry foreigners is based in every case on disrespect for the law displayed by representatives of the Ukrainian authorities and their attempts to use state institutions for their personal purposes,” vice-rector for research and pedagogical work, Eurointegration, and work with students of Lesia Ukrainka Eastern European National University Hanna Danylchuk wrote on Facebook. “No party in this story will allow Ukrainians to return this country on a constructive path if they join it. There is no choice to be made between Poroshenko or Saakashvili, because to oppose lawlessness, the manipulation of newsworthy events, and neglecting the security of the nation for a beautiful move in the political game, one needs responsibility, strategic thinking, and the thirst for victory. No, I do not mean one’s personal victory in an election, but rather Ukraine’s victory in the civilization war with Muscovy.”

So the problem lies not so much with Saakashvili, whose behavior is destabilizing while the country is at war, but with sanity (or lack thereof) of the top politicians, who seem to have gone too far in the game they have invented themselves. At least, even if Saakashvili really is an “agent of the Kremlin,” then the people are entitled to ask a question: who called this “agent” to Ukraine?