Why do terrorists fire again?

“In the context of the problems in Syria, Russian leadership needs new arguments to put pressure on world leaders,” deputy head of the Defense Ministry of Ukraine

The beginning of the week in the ATO zone saw noticeable intensification of the terrorists’ attacks in several directions at once, both in Luhansk and Donetsk oblasts. It is reported that in addition to small arms, the attackers used automatic mounted grenade launchers, 82 mm mortars, and anti-aircraft weapons. Also, some armored vehicles were noticed. This escalation has developed in the context of the preparation for the second round of local elections in Ukraine, as well as during the scheduled talks of contact groups in Minsk, participants of which has asserted repeatedly that any talks of truce would be premature. “Certainly, it may not be called a truce in any case. What we have is a period of calm, albeit fragile,” said Yevhen Marchuk, head of the security subgroup of the Trilateral Contact Group in Minsk on behalf of Ukraine, in a past week interview to The Day.

Accumulation of military vehicles in Luhansk has been observed for several weeks. At the end of October the locals reported continuous nightly movement of heavy equipment within the city, despite the fact that the ATO headquarters’ official reports spoke of a steady period of calm. MP Dmytro Tymchuk reports that in the city at least two new Russian military units about a hundred people each were spotted. The build-up of enemy vehicles, mercenaries, and Russian military personnel in the eastern Ukraine disproves the theory that Syria might have distracted the Kremlin’s attention considerably. It is obvious that the Russian enclave in Donbas not only poses a potential danger to Kyiv and creates means of pressure on decision-making on our part, but it tends to grow. That is, not only Syria serves as a distraction from Donbas, but Donbas is a Russian tool for manipulation, particularly in international politics.

It is worth noting that increased activity of terrorists coincides with a difficult situation in the occupied territories. Luhansk, Donetsk, and other cities in this region find themselves extremely depressed economically. In addition to all their present social and economic problems a new and unexpected one appeared – the shortage of gasoline. This surprised many, because the invaders might have provided enough for these territories. To somehow justify themselves to local inhabitants, Russia has prepared another so-called “humanitarian convoy,” the 44th, which is going to Donbas from Noginsk, Moscow oblast. In this regard, the fighting at the frontline combines with the false propaganda that Kyiv is allegedly not willing to go for any peace talks. This creates the atmosphere in which the poverty in Donbas is explained as Ukrainian influence.

“WE NEED TO RECONSIDER OUR ATTITUDE TOWARDS THE SECURITY SECTOR” 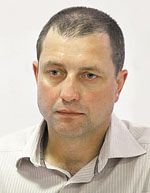 Valentyn BADRAK, director of the Center for Army, Conversion, and Disarmament Studies:

“The escalation scenario was predicted by many experts and relevant organizations before. The Kremlin went on to suspend the conflict, but at the same time they retained an option to use military force, in order to put armed pressure at any time. It happens and it will happen as soon as the Kremlin needs it.”

The current intensification reflects several factors. The first is the international one, as Russia began to face serious pressure from the leaders of the world arena. For example, the head of the Pentagon recently called Russia the greatest evil. Britain has also acknowledged Russia to be the greatest threat in the world. This prompts Russia to demonstrate its capacity for power in order to have additional arguments to pressure the Western world.

“Another set of factors is linked to the internal political situation of Ukraine. The outcome expected by Russia did not happen – pro-Russian forces did not gain enough ground for a revenge comeback. So, the Kremlin uses these attacks as an opportunity to destabilize Ukrainian authorities further. Especially now, when there are reasons for ambiguous interpretations of the government’s actions regarding the detention of certain politicians. In the end, we must learn an important lesson – which is the need to reconsider our attitude to the security sector.”