“The exhibit that awakens the conscience”

Recently a photo exhibit of the nationwide newspaper Den has opened at the Lesia Ukrainka Eastern European National University. But its venue, the library of the university, hasn’t had any effect on the categories of the visitors, because the exhibit has been held in Lutsk for many years, and not only students know the way there. So, the principal of the Lokachi Gymnasium Oksana Sakharchuk has to think about how, with one school bus (the second one was taken to the ATO area two years ago and hasn’t been brought back), she can bring as many schoolchildren to the exhibit as possible, so that they could see with their own eyes what makes her tearful and desperate, but also fills her with admiration with the sacrifice and courage of Ukrainian servicemen. For the Lokachi Gymnasium, where Larysa Ivshyna graduated in her time, they have a big library of Den/The Day’s books and have been holding very interesting conferences based on these books. The conferences are held jointly by pupils, teachers, and parents.

But before they only heard about the photo exhibit. To see these photos, the witnesses of the history that is in the past, but still has been having a huge effect on our reality, is, according to the director, a long-time dream of the gymnasium students, and sacred thing generally.

“THE PHOTO SHOW A POWERFUL ENERGY OF STRUGGLE”

“I have been living under the impression of what I saw and heard during the presentation of Den’s Days in Lutsk. It was the first time I attended such an event, which impressed me with its emotionality, content, modernity, and actuality, and a very stylish format. Before that I visited the photo exhibit. My first reaction was tears, which is logical, because we all have memories in our hearts. The photo exhibit is energetically powerful, and the photos show the powerful energy of struggle, sacrifice, often on the verge of human abilities. This sacrifice is for the sake of peace, for the sake of the state and its future. So, these photos often impress with their realism, but this is good, they depict what Ukraine and Ukrainians have been living with for the past two years. If they were different, not about the events that are called undeclared war, this wouldn’t have been so impressive, because it would have gone in dissonance with our reality. Therefore for me it was painful again that not everyone in Ukraine today, even in our part, care what heroes of the photos cared about when they went to fight. There are heroes and there are people who simply adapt, like it has been in all times, with all nations, and in all countries.

“Namely this photo exhibit makes one think deeply, it reminds, stimulates, and actually it awakens the conscience. And if not the conscience, but reason for sure: if you stay aside of everything, think that you will hide in your home like a snail, the war will not come to you. It will come, if the majority remains indifferent.

“I am glad that at the presentation I could personally meet the editor-in-chief of Den/The Day. By default we could have become friends by now, because at Lokachi School, generally in Lokachi, even many years after she left for ‘big life,’ people remember her, follow her, and rejoice at her successes. At the gymnasium we have held three readers’ conferences based in Den/The Day’s books, and every time we try to present this in a different form. We have invited former pupils who have become well-known people, people from the raion administration, parents, etc. Our pupils take interest in various thoughts and judgments. Reading Den’s glossy supplement, Route No.1, I notice every time that my homeland and my hometown Lokachi haven’t let Larysa Zhalovaha-Ivshyna go. No matter what she writes in the editor’s column to Route No.1, she will always mention Lokachi, her parents, neighbors, school, and church. And this mentioning is always appropriate and sincere. I think that only really strong and talented people are capable of this love to their homeland.

“I have also been thinking on holding a discussion of Lina Kostenko’s lecture she delivered over 20 years ago at the university, which back then was called the Volynian University. Larysa Ivshyna mentioned this lecture in her inauguration lecture dedicated to granting of the title of honorary professor of the Eastern European National University to her. I thank her for reminding us of this lecture. Den’s editor-in-chief is always welcome in Lokachi.”

“WE SHOULD THANK THE HEROES WELL-TIMELY”

“I have been to all Den’s photo exhibits, I always buy new books published by the newspaper. I have bought the book Catastrophe and Triumph. The Stories of Ukrainian Heroes. Why namely this one? I’m reading the newspaper and I know that Den was the first newspaper that started to publish materials about people who were the first to get into the whirl of this undeclared war and who were killed there. And the book is based on these publications. I think that today, when the word ‘peace’ is pronounced everywhere so often, we must remember those who fought for this peace, who prevented this madness from spreading further. And we should thank the heroes well-timely, it is important as well, it might be even more important for us than for them. 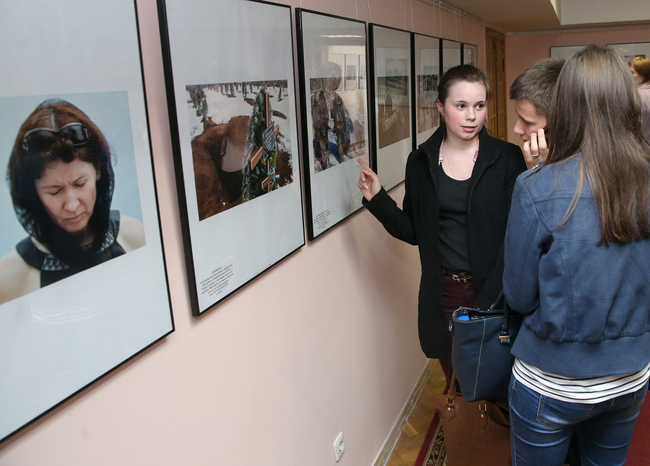 “The photos of politicians are quite interesting. The photographers captured unexpected angles, when a single photo tells more about the person than tens of surveys. This is an exclusive talent of the authors of Den/The Day, to find such angles. The photo exhibit shows many war photos, and this was a right thing to do. This is our reality which we would gladly forget, because the war is over there, not here. But this is not true, and the shots remind us of that and warn us. It is upsetting that over so many years of Ukrainian statehood not only numerous mistakes have been made, which have become fatal for the countries, but the most upsetting thing is that no one has been held responsible for that. The book A Case without a Statute of Limitations also tells about that. And everyone must read it to understand what we have come to and whose fault it is. Generally, I want to say the following thing about the newspaper Den: I want to live up to the time, which will come for sure, when it will be Ukraine’s leading newspaper, not because it will be appointed so. But it will be the leading one thanks to its professionalism, standpoint, and there will be time when Ukrainians will read it at the cup of morning tea or coffee, like Americans do with New York Times or Washington Post.”

“LARYSA IVSHYNA SHOWS EACH TIME WHAT REAL ART IS”

“It was the second time that I was moderating the reading conference of Larysa Ivshyna at the Lesia Ukrainka Eastern European National University. And it was the second time I felt nervous. Not only because of the meeting of dear and highly respected person, but also because we came to the meeting immediately after the opening of the photo exhibit. We were still overwhelmed with the emotions stirred by the exhibit. The faces on the photos and the faces that look at the photos – all this was carrying extremely valuable, emotional information, which proved the vitality and zest for life of our people, their power and beauty. I know that people at our university always eagerly await the meeting with Larysa Ivshyna. The students come with the goal to learn more about the materials they take interest in, ask a tricky question, and look at a real professional, Larysa Ivshyna. I have heard a biology student saying in a crowd, ‘I have come here, because this is professionally important for me.’ ‘You’re a biologist,’ someone in the crowd mocked. But the guy went on, ‘I am a photographer, journalist, and biologist.’

“Larysa Ivshyna gives confidence and instills willingness: if you have the feeling, you can become anyone, a journalist, a prime minister, or a historian. But it also shows high standards a person who is aspiring to belong to these society-shaping professions must meet. I am glad that tens of our students are writing me on Facebook, how they can get to the Den’s Summer School of Journalism. Hopefully, this year there will be more people from Volyn among its students. My favorite writer, Nobel Prize winner, and, first and foremost, a journalist, Gabriel Garcia Marquez said that the interview stops being art as soon as the journalist switches on the Dictaphone, without taking a pencil to not just record the speech, but follow the most important things: thoughts, emotions, and the beauty of the interviewee. Larysa Ivshyna, when she answers our questions, shows each time what real art is – the art of thinking and observation, feeling and presentiment, knowledge and constant learning of our history, politics, and state.”

It will be reminded that Den’s Photo Exhibit in Lutsk will be functioning at the premises of the library of Lesia Ukrainka Eastern European National University (30a Vynnychenka Street), from 9:00 till 17:00, through April 26; Mondays closed. The admission is free.