The Irish gambit, or the first Ukrainian victory over Russia

The coming congress of the International Federation of Journalists (IFJ) will start in France on June 6, with delegation of the National Union of Journalists of Ukraine (NUJU) in attendance. The Ukrainian delegation took part in the vote for and electing the president of the IFJ for the first time in Ireland in 2013. Then, Ukrainians pinned their hopes on the British candidate Jim Boumelha, and he was, in fact, elected president of the IFJ. We discussed how it happened then and what consequences the congress had for Ukrainian journalism and Ukraine with secretary of the NUJU, director of the Press and Television College, general producer of TAK TV channel Hlib Holovchenko.

Delegation of the NUJU participated in the IFJ’s presidential election for the first time in 2013. Why was the NUJU absent during previous votes?

“One should understand that, unfortunately, Ukraine has long been a subject of international activity rather than an international actor. It should be added that while Russia, for example, had a longstanding relationship with the IFJ as the successor to the USSR with all the rights it entailed, Ukraine needed to integrate and learn to operate in the global space. Ukrainians were amateurish in their foreign relations for a long time. Unfortunately, such tendencies are still there in some fields. So, although the NUJU became a member of the IFJ in 1992, we were always lacking something necessary for full membership and participation in the work of the IFJ, including voting. At one time membership fees were not paid, while on another occasion, the delegation was not formed in full. It took us 19 years to balance all these issues, and finally we had paid all the fees, our delegation came at full strength and was registered at the congress, and we participated in all activities of the congress. It is worth noting that the quality of our delegation was quite high, as it was led by chairman of the NUJU Oleh Nalyvaiko and included our union’s secretaries Dmytro Panchuk, Oleksandr Bryzh, Hryhorii Hryn, Oleksandr Holub, and yours truly. All delegates were professionals with many years of experience in journalism and an understanding of global processes, including in the media industry. So it seems like we and the union had to go through evolutionary processes in order to be able to fully represent the Ukrainian journalistic community and influence international processes.”

What were the delegates’ objectives?

“We were actually new to the process of electing the president and governing bodies of the IFJ, so we saw as our chief objective presenting the NUJU in the best possible light and establishing relations with other countries. I personally tried to promote the International Competition for School Media as a possible Ukrainian contribution to the global process of journalism development. When you get to a gathering which is a kind of Babel representing media of 124 countries, you see, firstly, how diverse is the journalistic community, and secondly, you get to understand that all of them are united by the main goal, I mean upholding professional standards of journalism, regardless of the country, ethnicity, and creed. Securing the freedom of speech and the right of journalists to work are the main tasks of the IFJ. We were rather theoretical in our approaches to it then. Yes, we had the Gongadze case already and were experiencing assaults on the media and journalists, but we did not know yet that before long, we would have hundreds of injured journalists and face a real threat to not only freedom of expression, but also the very lives of journalists. However, the global media community was already working on such challenges. Thus, we listened, watched, and talked then.”

How is the presidential election held in the IFJ? How delegates make decisions on whom to support?

“Before the election, we watched closely potential candidates and learned the views of our colleagues from other countries. Then, we long debated on candidates among ourselves. I can say that we paid attention to two potential candidates. One was Jim Boumelha, put forward by the British union. The second nominee was lobbied by representatives of the Union of Journalists of Russia. It should be noted that ‘colorful’ figures on the Russian union’s delegation included, apart from its chairman Vsevolod Bogdanov, secretary of the union and member of the State Duma, member of its Committee on Security and Combating Corruption, member of the presidium of the Russian National Anti-Corruption Committee Boris Reznik. The Union of Journalists of Russia was also actively promoting its candidate for a seat on the Executive Committee of the IFJ. Their interest and resources employed to ensure their candidates’ election were at the highest level. After talking with dozens of colleagues from different countries, we began to gravitate toward the candidacy of Boumelha. For many years, he was friends with Ihor Lubchenko, was effectively a lobbyist for Ukrainian journalism and consistently defended freedom of speech and professional journalism standards. 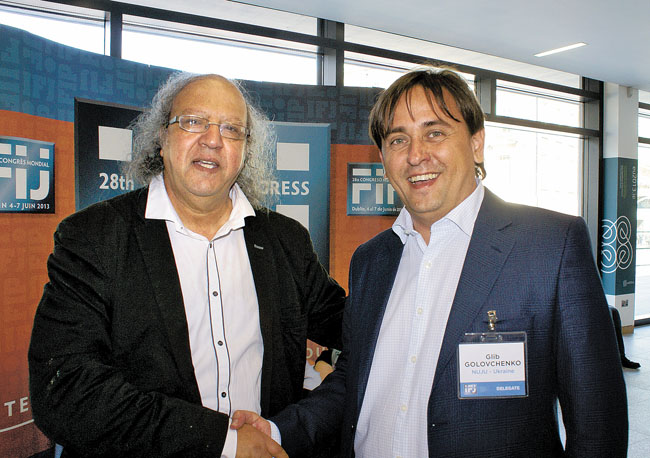 JIM BOUMELHA AND HLIB HOLOVCHENKO /  Photo courtesy of the author

“Our delegation held an internal vote and determined that we would support the incumbent president. But late that night, I met Boumelha in the lobby and he said that some delegates were suggesting that he withdraw as they saw him getting no votes. We can only guess who conducted such conversations with Boumelha, but after talking with many colleagues from other countries, it became clear that he would actually have a lot of delegates favoring him. At night, the three of us – Boumelha, Panchuk, and I – worked out an action plan, persuaded Boumelha to run for the president of the IFJ again and began to act in the morning. The congress’s votes on strategic development directions made clear an unbridgeable contradiction between the global journalism development path and the Russian way. It was further reflected in the vote against the Russian candidate for the IFJ’s Executive Committee, and subsequently in Boumelha’s electoral victory.

“At the final banquet, the IFJ’s president thanked Ukrainians for support. Thus, Ukraine and its amateurish approach succeeded in a free election and made it possible to effectively confront the well-organized and well-funded Russian effort.”

The events of 2013 and subsequent years showed that the Ukrainian delegation supported a worthy candidate, since Boumelha and the IFJ have become reliable partners of the NUJU and the entire Ukrainian journalist community. Please, tell us more about it.

“Yes, it is true. In November 2013, Boumelha and the IFJ delegation arrived in Ukraine at a historic moment of the NUJU’s accession to the European Federation of Journalists (EFJ). Ukrainian journalists joined the European Community before the nation itself signed its Association Agreement with the EU.

“And then, there was the assault on journalists during the crackdown on the student Maidan. Hundreds of Ukrainian and foreign journalists were beaten, injured, and even killed between December 1, 2013 and February 21, 2014. Then, the IFJ and Boumelha lent us a helping hand, supported us and sent a note of protest over the assaults on journalists. Delegations of the IFJ and EFJ were with us in the most tragic days during the shootings on the Maidan in February 2014. At that very time, they were in Kyiv on an official visit. They stayed in the Kozatsky Hotel and saw first-hand everything that happened in the downtown Kyiv.”

In your opinion, what was the role of the official delegations of the IFJ and EFJ in preventing distortion of the information flow from the Maidan? We saw media providing truthful accounts of events instead of versions spouted by Russia or the Ukrainian government of the time.

“Of course, they played a very significant role. Members of delegations offered to act as negotiators, but the Ukrainian authorities did not need them then. But the governments which had representatives in Kyiv took interest in their reports and drew their own conclusions. Therefore, members of these delegations as well as all foreign and Ukrainian journalists who worked non-stop then made a huge contribution to getting the world learn the truth about the events on the Maidan.

“And I want to finish this conversation on a positive note. While attending the International Competition of School Media, the Council of Europe’s expert Tetiana Repkova said that this event was a global phenomenon for the media community that would certainly impact positively on the quality of further development of the media and quality of journalism. That is why it gives us a clear chance to get the IFJ as a co-organizer of the 20th International Competition of School Media, and the perseverance of the Ukrainian delegation at the coming congress will be key for getting this decision passed. We also hope to demonstrate the quality Ukrainian press to the IFJ congress’s delegates, I mean Den/The Day newspaper.”