Oksana Didkivska-Vorobiienko, artist and researcher of culture, speaks about dating on cemeteries and the aesthetics of death as such
Maria Prokopenko

On the night of November 1, the world celebrates Halloween. It is difficult to trace its history reliably. The holiday is very ancient – probably with Celtic roots; after the adoption of Christianity it moved to the eve of All Saints’ Day. Today the tradition has spread to different continents, and few people think about its origins. Probably, this is one of the most commercialized holidays – spooky masks and decorations in the shape of grinning pumpkins are sold from early October, and thematic parties are celebrated in every pub. Sometimes traditions take an unexpected turn: not long before this year’s Halloween in Germany and Austria, a gang of robbers began to assault people wearing spooky clown masks, and the phenomenon is not new.

For some people, Halloween is an occasion to have fun, for some other it is an opportunity to show their imagination by creating a costume party image; some are angry to see a grinning pumpkin in every window, others don’t care. But the celebration is strongly associated with the topic of death, while at the same time being funny and naughty – that way it’s not so scary to speak of death. Here we publish the conversation with culture researcher and artist Oksana Didkivska-Vorobiienko on the attitude towards death and funeral in Ukrainian culture from the past century to today. Oksana is the founder of art project “Aesthetics of Death,” which began with the eponymous exhibition in 2015. The researcher conducts thematic lectures and excursions within other projects, prepares art exhibitions. She is interested in historical and cultural aspects of the issue, as well as its intersection with art; she also explores the modern person’s understanding of the phenomenon of death. In parallel, she writes fiction in the genre of black humor, but keeps the texts unpublished for the present. Next is Didkivska-Vorobiienko’s direct speech.

A WEDDING FOR A DEAD GIRL

“The topic of death and the rituals associated with it is understudied in Ukraine. However, we had had very interesting traditions of burial, which comprise a wide field for research. A modern person knows little about past times, even about relatively recent ones, such as 19th century. For example, Ukrainian peasants had an interesting ritual of burial for unmarried girls – it was performed in compliance with all the wedding ceremonies. The woman was dressed in wedding clothes, a groom was found among the living, and the rings were made, albeit from dough. It was like a theatrical performance, even a relative of the deceased could play the groom. And they sang wedding songs at the ceremony.”

THE POOREST WERE BURIED IN RENTED COFFINS

“The rituals for burial in the cities had differed significantly from that in rural areas. The Russian Empire had seven ranks of funerals, and that distinction was respected in Kyiv. The first rank was the most prestigious. The first rank funeral should have had 6 horses and 16 candle bearers, and three days of Psalms reading for the dead, who were buried at the cemetery near the church.

“The farther the burial was from the temple walls, the lower was the rank. The seventh rank was a burial at the state expense, and there was a saying: ‘To put into a state coffin.’ But even then the coffin had not always been provided by the state. The poorest were often put to rest in a rented coffin, which was not buried along with the deceased. The coffin was brought to the cemetery in the carriage, had the deceased extracted from it, and then returned to the owner. The coffins were provided for rent by funeral homes and individuals, usually elderly.”

“DE VECCHI WIDOW HAD BEEN TRAVELLING TO ITALY TO GET MARBLE”

“In general, the so-called secular graves – with pictures or sculptures of the deceased – began to appear in the 19th century. Before that, the graves were very minimalistic, according to the church canon, akin to Calvary – a stone and a cross on top. At first the church did not approve of too fancy decorations on graves, like white marble statues or angels, but the secular tradition had become the norm to the middle of the 19th century. Graves of ordinary people had crosses made of wood or metal, and they have not survived until now.

“The rules of how a burial site should look, for example at the Baikove cemetery in Kyiv, had started taking shape as soon as it was founded in the 1830s. The style of a particular tombstone was largely determined by the workshop that made it. In Kyiv, the most famous were widows De Vecchi, Schiavoni, and Rizzolatti. De Vecchi widow had been travelling to Italy to get marble, and she brought artists, borrowed the traditions of Western Europe; to some extent that practice had shaped the canon.

“Many tombstones in Ukraine are protected as architectural monuments. There are more than 200 such monuments on Lychakiv cemetery in Lviv, most of them were created in the 19th century. Vladyslav Horodetsky had built ten cemetery crypts on Baikove. However, today it is difficult to identify which ones are his – during World War Two, the documents that contained this information were destroyed. Baikove also has a crypt and a church built by Volodymyr Nikolaiev.”

“RITUALS IN VILLAGES WERE NOT THAT EASY TO ERADICATE”

“With the arrival of Soviet rule, the funeral ranks were abolished. A separate decree was issued to address that. But the distinction between prestigious and non-prestigious burials still remained. Famous Soviet leaders were buried with processions, unlike ordinary people. New graves were added not by the radial principle, as before the revolution, but by alleys. 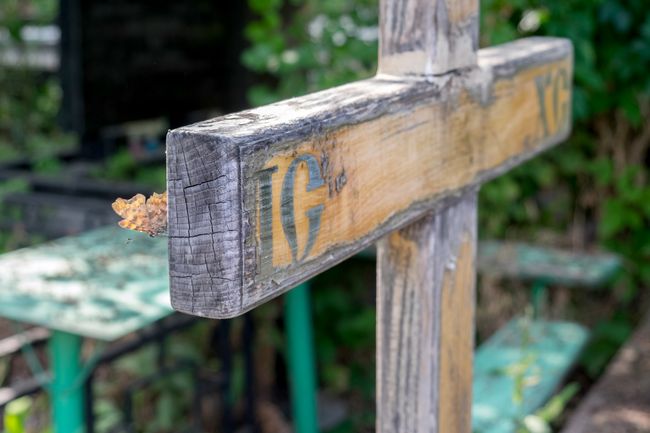 “In Soviet times, Baikove cemetery got repopulated. Pavlo Tychyna, who rests in the central avenue, was buried on top of someone else’s grave. Before him there was a tombstone to one of Kyiv’s benefactors, created by the studio of de Vecchi widow – a unique architectural monument. In fact, the whole central avenue of Baikove had been repopulated.

“Funeral ceremonies in villages were not as easy to eradicate, as in cities. By the mid-20th century, people there still followed various rituals, but the World Wars had changed their views on it. During the World War Two, people had often been buried in mass graves. But in villages they still continued to put crosses, which were Christian symbols, on graves. The dead were also given church funerals.”

“GRAVES HAVE ALL THE ATTRIBUTES OF A CELEBRATION”

“The culture of burial has been permanently transforming. Today we are borrowing something from the almost lost traditions of the 19th century, particularly in tombstone architecture. There are wonderful examples on new avenues of old cemeteries, on the same Baikove – there are modern monuments that follow the classical style in compliance with the symbolism that was forgotten in the Soviet times. Flowers and other symbolic plant ornaments are often used. Some tombstones can be attributed to kitsch culture, bearing the influence of postmodernism.

“In Ukraine, people are immortalized with beautiful monuments in the Western tradition, but death is separated from life as much as possible. The mourning time is minimized; there are no mourning clothes, which would be worn after the funeral. People try to be happy, even in times of grief. This is America’s influence – some interesting examples on this topic are described by researcher Philippe Aries in his book The Hour of Our Death. The American dream has influenced the culture of burial to a great extent.

“It looks like people are trying to fight the macabre atmosphere. For example, a tombstone has a picture of a wide grin. I see hundreds of those in Kyiv; I saw a tombstone with a woman that holds a bottle of champagne. Graves have all the attributes of a celebration.”

“THE 19th CENTURY PARIS HAD A MORGUE, TO WHICH PEOPLE CAME WATCHING AT THE DEAD”

“Death can become boring. But this subject has been echoed in the culture for a long time. Sometimes people are even attracted to a gloomy place. Now there is such a phenomenon as black or dark tourism. It means a tour on places of genocide, torture, places that store people’s remains. And it was always like that. In the late 19th’s century Paris there was a morgue, to which people came just to look at the dead – they were exhibited in the window. At first they did it so that dead, which had no identification documents, would be recognized. But then the morgue staff noticed that people, young and old, were coming just to look at the dead, and began to take charge for it. It was a popular Paris attraction. It was closed in 1907 – and that coincided with the turning-point in changing the attitudes to death.

“Going for a walk to the cemetery is a very common practice. It is not very common in Ukraine now, but in the 19th century it was normal to have a date with someone at a cemetery. It was a place of tranquility and remembering the dead. In addition, cemeteries looked very aesthetically pleasing: the central sites featured beautiful works of art made by famous artists. Kyivites enjoyed strolling along Baikove cemetery, or Askold grave. Now this tradition is coming back.”