Anatolii Stepanov, who has photographed Ukrainian defenders since the beginning of the war in the east, speaks about his heroes

The exhibit “Warriors” at the “Kyivan Fortress” museum caused quite a stir recently. The project featured selected works by the photographer Anatolii STEPANOV. Emphasis is put on the soldiers born after Ukraine had gained independence. The youngest of them is only 18. Courage, experience, childish naivety in their faces, confidence and recklessness are conveyed so masterfully that visitors find themselves eye on eye with the horrors and heroism of the frontline routine, which a certain part of society is, frankly speaking, trying to abstract away from. Bu the war is on.

Earlier, Stepanov worked for Reuters and Associated Press, but when the Russian-Ukrainian war broke out in the Donbas, he went there and began to make photo reports of the events, thus documenting our contemporary history year after year. Anatolii is also a longtime participant in and a prizewinner at Den’s international photo competitions. The talented photographer told us about the heroes of his pictures, a special power of photographs, and the war itself which he not only watches through his camera’s lens, but also takes to heart.

“THIS UKRAINIAN WOUND IS JUST ROTTING”

One can see at the exhibit a lot of soldiers born after 1991, after this country gained independence. Do you think they have a special perception of the frontline situation in comparison with older servicemen?

“They have signed contracts, and it is their profession to be a soldier. And, not to deceive himself, a soldier must first of all know how to kill the enemy. These 20-, 22-, and 23-year-old boys must possess this skill right now. As a matter of fact, most of these people are young enough to be my sons. My daughter is 22… But fate decreed that they have to risk their lives, lose their health and sometimes life every day in the war. They are very young and should enjoy their life, learn, love, and have children. Instead, they are over there so that we could live normally here. 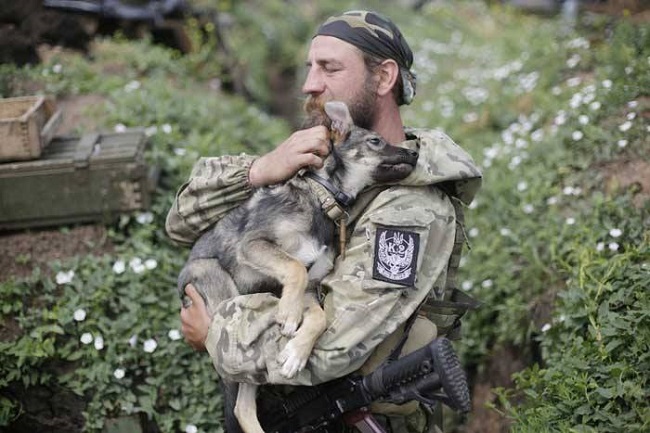 “Thanks to these boys, thanks to the army, the war in the Donbas has frozen and is smoldering. We sustain losses – 15 or more people are killed or wounded every month – they get serious injuries, lose a hand or a foot, and become disabled for life. Down here, we’ve stopped thinking about this – all is OK, we are planning a peaceful life. But in reality the war is just lying low. Essentially, there was a real war in 2014 and 2015, which then gave way to low-profile skirmishes. The Minsk Agreements froze this situation, and it is smoldering now. This Ukrainian wound is just rotting. So far, I can’t see a sound-minded solution of how to pull out of this situation.”

Among your exhibited works, there is a photo of the 25-year-old Hero of Ukraine Vasyl Tarasiuk. Could you tell us about him?

“I love Vasyl very much. I was invited to this position [‘Eagle’ on the outskirts of Avdiivka. – Ed.] in April. We’d just begun to launch the press – in fact for 24 hours. I had a very good relationship with the Ukrainian army’s 72nd Independent Mechanized Brigade. I like this brigade of the 2017 version very much because I could visit those positions and work without hindrance. The battalion commander with the nom de guerre ‘Slav’ said I would stay there from lunchtime to night but sleep over at the ‘Festival.’ ‘Festival’ is also a position, but it is deep in the woods. There is a very well-protected dugout there, which can withstand even the hit of an artillery projectile. So I came to the ‘Eagle’ at lunchtime. There were young boys there – Roman Chaika, Vasyl Tarasiuk, and a lot of other guys with whom I am still in contact.

“It was clear even at that time that Vasyl was every inch a military. You know, his composure, looks… His subordinates held him in very high esteem. Nobody ever said it out loud, but you could see it immediately. We approached him, and I said: ‘Vasyl, can I take a picture of you here and there?’ Then we began to make the round of our positions, and I photographed him against the background of badly cut trees. The impression was the Apocalypse had come. 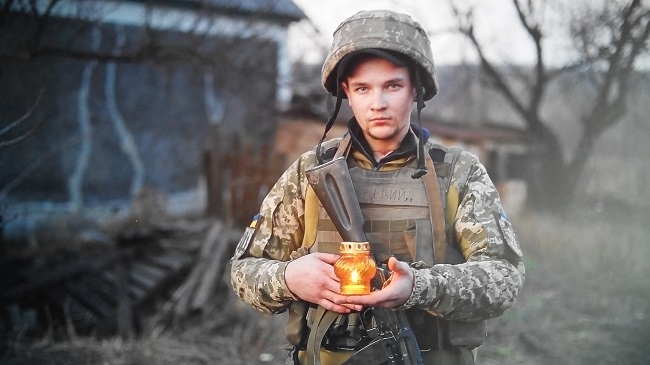 “Then somebody called me in late April and said Vasyl was in a Kyiv hospital. Supposedly, he ‘butted’ with a tank. I went to hospital, and we had a very warm meeting. He said the tank had begun to pound the neighboring position and hit the dugout. Some were killed and wounded. And he jumped out and began to fight a one-on-one duel with the tank. He hit the tank three times, the tank smoked a little, but he failed to put it out action. Vasyl says he saw a projectile flying over the head. In other words, he was doing this deliberately. He drew fire to make the tank stop shooting at the neighboring position. The second projectile whizzed somewhere close by, and the third landed on the position Vasyl was on. He was seriously wounded and shell-shocked. But the enemy tank no longer shelled that position because Vasyl drove it off in this way – at the price of his health. I am proud to have met him, for he is a superb soldier and officer. I think our army has lost a nice officer due to his wounds.”

“ANIMALS ARE A DIVERSION FOR SOLDIERS”

One of your photographs shows a soldier with a dog. The photo seems to beam warmth. What is the story of this snap?

“‘Wolf’ is the soldier’s nom de guerre, and Patron is the puppy. Actually, when soldiers are at war, on the battlefield, they are always under a strain. People die, you are awaiting fire all the time, hide and shoot… But a human cannot be always under stress, so tenderness and warmth accumulate. If one is at home, he has a wife, children, and human contacts. And here it is animals that play the role of a relaxer of sorts, a consoler. You just can’t imagine how much tenderness you show towards these animals. Incidentally, both cats and dogs stick together there. I’ve never seen a dog chase a cat, although this may happen.

“I saw a puppy grow into a big fox at Butovka [a coalmine on the outskirts of Donetsk, were the Ukrainian military are stationed. – Ed.]. She was friendly to cats and dogs and could eat out of your hands. This must have destroyed her. She died in October because she used to come too closely to people. As soldiers lurked at the listening post at night, the fox began to rustle the dry fallen leaves. You can’t see who is there and may think that somebody is creeping towards you. So, they threw a grenade and saw a dead fox in the morning. A wild animal must not stay next to people – one way or another, it is the law of nature. But I used to hold her in my hands when she was a little cub, like a dog puppy. She liked to be caressed, scratched behind the ear, play with other puppies and cats. But, as she grew older, she began to show a wild behavior, prowl somewhere, and seclude herself. Although she no longer lived with people and roamed somewhere, she would come over every evening. She ate canned meat with pleasure and could even take food from your hand. Animals are such a diversion for soldiers.”

ON THE DRAMA OF CAPTIVITY IN THE EYES 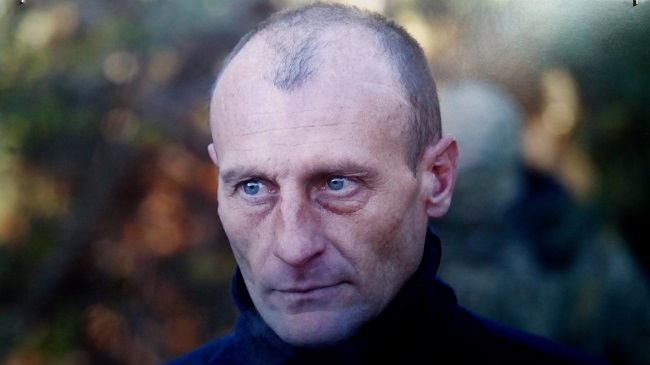 Please tell us about the photo of a soldier with the Holy Fire of Bethlehem.

“It was December 2017, Popasna, Luhansk oblast. We went to the positions with the volunteers who brought the Holy Fire. There had been the Catholic Christmas shortly before, and the Fire was being handed out to soldiers. Soldiers are always pleased to meet volunteers or journalists because these people are not indifferent to what is going on there. A boy was holding this little icon lamp, and I looked into his eyes and face. He was very young, but you couldn’t say he was a child because he was already a soldier. He came back after being wounded: an automatic grenade launcher’s fragment pierced his trachea, he was saved, but he didn’t go on vacation and came back right after being discharged from hospital. He did it just two or three days later. Well, I asked him to hold the Holy Fire and took a snapshot. I like this photograph very much.”

There is also the photo of a soldier who has come back from captivity. What astonished us were this man’s eyes. Please tell us about this case.

“It is a soldier of the Rivne-based Horyn battalion of territorial defense. He spent a short time in captivity, but you can see on the photograph what a dramatic impact this had on him, what a drama is in his eyes. Apparently, he does not fully believe that he is free now. I even remember the information about how these people were taken prisoner – it happened near Svitlodarsk. Coincidentally, I photographed this exchange in late October. Very expressive eyes indeed.

“But, as far as prisoners of war are concerned, the photos taken on September 20, 2014, impress me more, you know. They show the boys being released from the captivity they got into at Ilovaisk, and their faces are so horrible and haggard that I can only imagine what they went through in that captivity. Incidentally, on the same day, just half an hour before this, I photographed the people being released by Ukraine’s Security Service – the separatists whom our side had taken prisoner. They looked well-fed, laughed, joked, even ‘trolled’ their escorts, behaved brazenly, and showed impunity. Russian television immediately met and interviewed them, as if they were ‘heroes.’ They were saying with supercilious smiles how difficult it was in Ukrainian captivity, how they were brutalized and tortured.

“As for expressiveness, the point is not in the photo camera. You see, all of these people are under great stress and fear of death, on the edge of life. For something – either a bullet, or a mortar shell, or a projectile – may arrive and kill a man. Life is perceived and felt entirely differently there. Therefore, whenever I see the person I want to photograph, I come up to him or her and ask: look at me please. This lasts for two or three minutes, and I take one or two shots, not more. This is enough because people usually look you into the eyes frankly, and there looks mirror this drama of war all the time. I have also photographed seasoned soldiers very much, I have a set of these snapshots, but now I focus on the boys who are, so to speak, younger than Ukraine.”

What do you think of your works? Do you feel what kind of a scene there should be? Do situations and people themselves find you?

“It depends. I can see whether or not there will be a photograph here. I work in the field, not in the studio, so I am trying to react to what is around me, rather than to arrange things.

“Sometimes a successful photograph stills a moment and produces new meanings and symbols. Unlike a video, a photograph has this property. It stills time and lives eternally if it is successful. Everybody tends to see something of his or her own and can find new meanings in a photograph.”