The Sheremet case: context and subtext

Most journalists and activists are probably even enthusiastic about the film Killing Pavel, in which participants of the Slidstvo.Info project together with colleagues from the Organized Crime and Corruption Reporting Project international network talk about their investigation into the murder of Pavel Sheremet. The filmmaking crew included Anna Babinets, Olena Lohinova, Dmytro Hnap, and Vlad Lavrov, led by American director Matt Sarnecki. The Ukrainian journalists also asked the international investigation group Bellingcat for help. Numerous posts, comments, and calls for the government to take action have raised the debate to a new level.

However, it is important to go beyond counting efforts; while recognizing that the journalists involved did really do a professional job, we should address the condition of journalism and the country as a whole, which actually influenced the conduct of the investigation. Yes, a lot of new information has come to the fore, but we now have even more questions than attempts to answer them. Chief among them are as follows: What was the motive of Sheremet’s murder? Who and why needed it to happen? As we know, the official investigation has been looking into several versions, including the deceased’s professional activities and Russia’s efforts to destabilize the situation in Ukraine.

During the film launch and discussion with journalists present, who filled the capital city’s MediaHub’s auditorium, a great many details were made public. According to the creators of the film, their goal was to find out what had happened the day before the murder and how exactly the crime had been perpetrated. To achieve this goal, they visited many establishments and asked their owners to provide videos from surveillance cameras installed around the place where explosives had been planted under Sheremet’s car. Some of them provided such videos, others refused. Accordingly, journalists have not yet established the murder’s motive and found its instigator, because they claim to be doing their best to investigate the evidence and compare it with the official investigation’s version. As a result, they have concluded that the police have missed some details.

“It might be due to incompetence, but we may be dealing with something much more sinister here,” say the film’s creators. They claim that the official investigation has missed a lot of details and believe that a former officer of the Security Service of Ukraine (SBU) might have been involved in the murder. “Please be advised that Ihor A. Ustymenko [the man mentioned by the journalists. – Author] was dismissed from the SBU effective on April 29, 2014,” the SBU spokesperson Olena Hitlianska wrote in a response on her Facebook page. “Had journalists contacted us and asked about Ustymenko not after the program aired, but rather before it was broadcast, they might have found themselves without a story to tell... We would like to remind everyone that the criminal investigation into the murder of Sheremet is conducted by the National Police, and it is its investigators who we recommend to contact for comments on the case itself.” 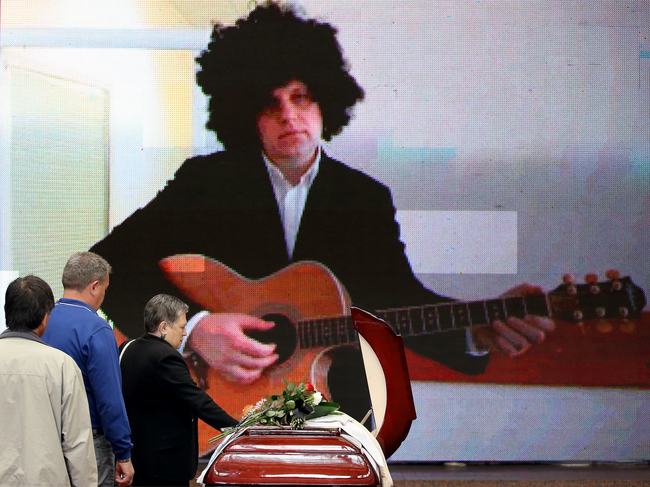 After the murder, which occurred on July 20, 2016, government officials (both President Petro Poroshenko and the then chief of the National Police Khatia Dekanoidze) declared at once, as usual, that solving the crime was a matter of honor for them. However, ten months after the fact, the official investigation team still has no answers. The officials who claimed to be committed to investigating the murder of Sheremet were absent at the film launch as well, even though they had been invited. According to the journalists behind the investigation, their appeals for information in the Sheremet case, which they directed to the president, the head of the Ministry of Internal Affairs (MIA), the head of the SBU, and the prosecutor general have remained unanswered.

The film’s creators talked not only about journalist of Ukrainska Pravda Sheremet, but mentioned the murder of the publication’s founder Georgy Gongadze several times as well. It was presented as mere information, bereft of appropriate conclusions or comparisons. This was what I pointed out during the discussion on the film. After all, causes of Sheremet’s murder must be sought primarily in the absence of a legal closure regarding instigators of the crimes committed in the Gongadze-Podolsky case. For 17 years already, the people whose voices were recorded on the Melnychenko tapes as they were discussing crimes against Oleksii Podolsky and Gongadze have been walking free.

It is somewhat surprising to hear journalists trying to dig deep in the Sheremet case while ignoring the substance of the Gongadze-Podolsky case. For example, Killing Pavel does not rule out possible surveillance of Sheremet and his partner Olena Prytula on the part of the SBU. Drawing a parallel with the Gongadze-Podolsky case, it should be noted that before the Kravchenko’s ‘eagles’ committed their crimes against Gongadze and Podolsky, both were followed by surveillance departments of the MIA and the SBU at the same time. Of course, this does not mean that the Security Service was involved in the murder of Sheremet, but assuming that surveillance was being conducted, we still have to answer the question “Why?” Another parallel: both Gongadze and Sheremet were working for Ukrainska Pravda, and both were killed after leaving Prytula’s apartment. Is there a link? This is another open question.

I drew attention to another important issue, namely the lack of consolidation of the media community. After the film launch, Babinets urged all journalists to ensure that each of them follows the Sheremet case closely and never forgets about it, keeps covering it and requesting the authorities to complete the investigation. Actually, Den/The Day have been writing about it for years. After all, it was journalists going silent and venal regarding the Gongadze-Podolsky case that led to absolute impunity which encouraged new murders, including that of Sheremet.

The latter wrote in a column for Ukrainska Pravda after a criminal case was launched against Leonid Kuchma in March 2011: “The criminal prosecution of former president Kuchma over the murder of journalist Gongadze, or rather the end result of the case, will show not only whether there is justice in this world and whether evil gets punished. This story will also show whether Ukraine is a real nation.” In the same year, Sheremet also wrote on the anniversary of the murder of Gongadze on pravda.com.ua: “I see the Gongadze story as transparent. It is Kuchma who I blame for it... Most likely, Kuchma did not give a direct order to kill Gongadze. Rather, he asked them to get ‘uppity journalists’ to shut up, and his underlings did their job too well. Therefore, journalist Podolsky had his body turned into a huge bruise, while Gongadze was killed. Was it a case of excess by the perpetrator? Maybe so, but it does not absolve the Ukrainian president of responsibility... As long as the Gongadze case is not completed and the perpetrators are not made to answer for his death, we should not calm down. This is because otherwise there will always be new high and mighty people, new leaders of the nation who will want to have fun at the expense of the people, to experiment at the expense of the state.”

These were right words. However, they did not stop Sheremet from attending in the company of Prytula events sponsored by the Kuchma-Pinchuk family, including the Yalta European Strategy meetings, and nicely chatting with the former president. A similar situation has existed regarding former journalists of Ukrainska Pravda Serhii Leshchenko and Mustafa Nayyem. While attending court hearings in the Gongadze-Podolsky case, I have never seen them there, but they have been regular attendees at events sponsored by the just mentioned family – first as journalists and then in their capacity as MPs. It all reflects both the state of the country and the condition of journalism. Unfortunately, many media professionals, politicians, public figures do not prioritize integrity and honor. Accordingly, before talking about the Sheremet case, we need to understand what Ukraine he arrived in, what Ukrainska Pravda he worked for, and what kind of a person Sheremet was himself. Discussing the details of the murder is not enough, since we need answers to these questions.

At the end of the film launch and discussion, Hnap remarked that it made no sense to talk about consolidation of journalists, because it was so clearly needed, being “as simple as ABC.” However, the truth is that most members of the journalistic community do not even know their ABCs here.