Today Alexei Navalny can feel like a winner. In the center of Moscow alone, the unauthorized rally he called to protest corruption in the Russian government, with its slogan being “He is not Dimon for us,” gathered at least 8,000 people even according to the clearly understated estimates given by the police. Meanwhile, independent observers estimated that at least 20,000 people took part in the rally in the center of Moscow. Moscow has not seen opposition rallies of this magnitude since the Bolotnaya Square protest. It happened despite the Ministry of Internal Affairs appealing to people not to take to the streets and the Kremlin roundly condemning Navalny’s call to action as a “provocation.”

By the way, Navalny claims that he considers the protest to be authorized, since the Moscow municipality never provided him with an alternative venue for the rally after refusing to allow it to proceed on 1st Tverskaya-Yamskaya and Tverskaya Streets. After that, the opposition leader called on his supporters to hold a “protest walk” along the abovementioned route. Meanwhile in the provinces, tens of thousands attended both authorized and unauthorized rallies in support of the fight against corruption. In total, according to Navalny’s estimate, about 100 Russian cities were to host rallies and marches decrying corruption.

People did not get scared of the possibility of the government reenacting the harsh response scenario featured in the crackdown on the May 6, 2012 protest. Over 860 people were detained in Moscow, including Navalny himself and employees of his Anti-Corruption Foundation, as well as at least three dozen minors. The latter category included British subject Gregory Hill, a student of a private school in Moscow, and the police officers had beaten him up quite severely as well, which has made an international scandal likely. Navalny had a misdemeanor complaint filed against him, accusing him of committing an offense provided for in Part 1 of Article 20.2.2 of the Code of Administrative Offenses (holding an unauthorized mass gathering) and punishable with up to 15 days of jail, and spent the night under arrest at a police station before the trial next morning. Meanwhile, several activists were detained an hour before the rally even began. 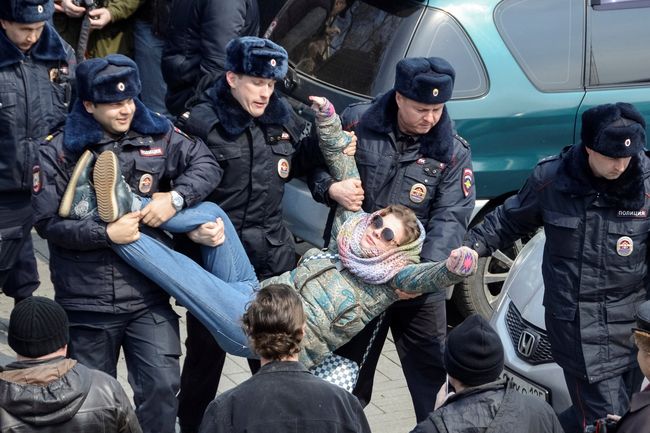 Vladivostok, Yuzhno-Sakhalinsk, Khabarovsk, Yekaterinburg and some other cities also hosted rallies against corruption. In St. Petersburg alone, up to 15,000 people attended. Some arrests were made in the provinces as well. However, the police acted relatively gently, brutal skirmishes were avoided, and most detainees face only misdemeanor complaints citing Part 5 of Article 20.2 of the Code of Administrative Offenses (violation of the procedure for holding public events), and not criminal cases. However, the first criminal case has already been launched over alleged attempt on the life of a policeman. According to the authorities, the 33-year-old police officer suffered several blows to his head, inflicted by unidentified persons and with an unidentified implement, and is now in a hospital in grave condition. It is possible that we are really dealing here with an attack committed by extremist provocateurs who are trying to provoke the authorities into repression to radicalize the protests. The individual who sprayed “irritating gas” in Pushkinskaya Square could have been one of them as well, although in this case we can suspect him of being an undercover police officer as well.

Nonetheless, the protests were peaceful overall. Still, the very fact that the authorities allowed such a numerous opposition rally to go ahead in Tverskaya Street and Pushkinskaya Square is in many respects a significant event. After all, if they wanted to, the police could have cordoned off the rally site and begun mass arrests as soon as people appeared on the way to the gathering spot. Such tactics, by the way, have long been practiced by Belarusian law enforcement. However, it is manifestly against Vladimir Putin’s wishes to be like Alexander Lukashenko and frighten future voters at the moment. Thus, even though the police drove prison vans to Belorusskaya, Mayakovskaya, and Tverskaya metro stations as well as to Manezhnaya Square the morning of the protest, they allowed the rally to proceed. 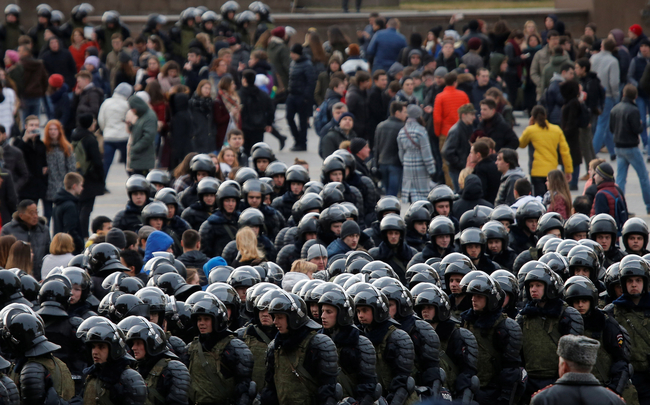 Apparently, the Kremlin decided that it was necessary to give people an opportunity to blow off steam of accumulated protest mood. Most likely, an important part in the decision was played by the fact that the main target of the protests was not Vovan, but Dimon, that is, not President Vladimir Putin, but Prime Minister Dmitry Medvedev. The latter has long been a well-functioning lightning rod, designed to deflect criticism from his more senior comrade. After all, the rally was provoked by Navalny’s foundation’s investigation into the secret multibillion-dollar assets of the Russian prime minister. Also, Medvedev himself begot a historical phrase on the day of the meeting: “Well, we have enough crooks here, we understand this.”

Undoubtedly, the protests do not frighten him, and he considers his premiership to be safe. As I have repeatedly written, Putin will never remove Medvedev from this position, simply because of the fear of a palace coup. Theoretically, we can assume that if a real popular-based revolution starts, they will try to sacrifice Dimon to save Vovan, but it will definitely be too late by then. In the meantime, Putin will by no means fire him, especially if the dismissal will be provoked by the opposition-led protests. The Russian president considers showing any weakness to be unacceptable. Probably, the Kremlin hopes that the opposition-led protests, even mass ones, are not that dangerous now, an entire year before the election. Let them frolic for now, the regime believes, and the protests will still go nowhere, and the opposition will no longer have any strength left for the election. People will get tired after seeing that nothing changes as a result of the protests, and they will stop taking to the streets. Meanwhile, the election will be held under the full control of the authorities, who will count the votes as they see fit. However, along with such a nice scenario, there is another one, which is unpredictable. The protests may grow, especially if the economic situation worsens, and then the authorities will face a hard choice: either to severely suppress the protests at any cost or to make some compromises without realizing where this can eventually lead.

In any case, Navalny demonstrated his strength today. He is the only Russian politician capable of bringing to the streets tens and hundreds of thousands of people. Of course, not everyone likes his imperialist nationalism, his position on the Crimean issue, and his outright populism bordering on xenophobia, and these misgivings are justified. However, there is no other opponent of Putin who can be compared to Navalny in terms of influence and popularity. Therefore, the Kremlin will have to take him into consideration, which means that Navalny risks repeating the tragic fate of Boris Nemtsov.