The perfidy of a live broadcast

Lawyer: “Pukach gave all the necessary testimony, so those who ordered the crimes against Gongadze and Podolsky could have been named long ago”
Ivan Kapsamun

We would like to draw your attention to a fresh interview with Prosecutor General Yurii Lutsenko in the ZIK TV channel’s program “HARD with Vlashchenko.” The hostess discussed with the guest such topics as confrontation between the Prosecutor General’s Office and the National Anticorruption Bureau, the reform of the former, the Yanukovych case, the Euromaidan case, and the Korban case. But there were also some other questions which Lutsenko happens to answer extremely seldom. The program culminated in the high-profile Gongadze-Podolsky case. Although the prosecutor general promised after his appointment to report on the search for those who ordered these crimes within a month, he has failed to do so in the past one and a half years. He would only answer the Gongadze-Podolsky case-related questions if asked by journalists.

Here are the impressions Natalia VLASHCHENKO, TV presenter, general producer of the ZIK channel, gained from the interview. “I have known Yurii Lutsenko for many years and have been watching closely the biographic stages of his life, his career achievements, and human qualities, particularly when he was in prison. In my opinion, he never lied either in informal conversations or in professional communication, when he was giving interviews,” Vlashchenko comment to The Day. “Yes, Lutsenko may have kept silent on some points, but he has never said brazenly that ‘white’ is ‘black.’ I know what it is to be the Prosecutor General of Ukraine in today’s political context – it is an extremely difficult situation which involves a lot of things, such as relationship with the president, MPs, lower-level prosecutors, etc. But it seems to me he sincerely believes in what he is doing and really wishes the Prosecutor General’s Office to be reformed successfully. What hinders this? Obviously, he lacks experience and is too emotional. Sometimes he is ‘beaten’ for emotional public attacks. But I started the programs with this – I always look at figures, at what one has in fact done. It is like in the case of doctors: you should appraise their work by the number of difficult operations they’ve performed and the number of patients who have survived – it doesn’t matter what shoes he wears, what color his smock is, or what he once said in the heat of emotions. I am grateful to Mr. Lutsenko for coming to our program. Most of our top officials prefer to hide at such moments. When society is emotionally excited, when you are criticized very much in social media… I invited him, and he came to answer key pin-point questions. This is a bold step of the official who seems to be ready to take on responsibility.” 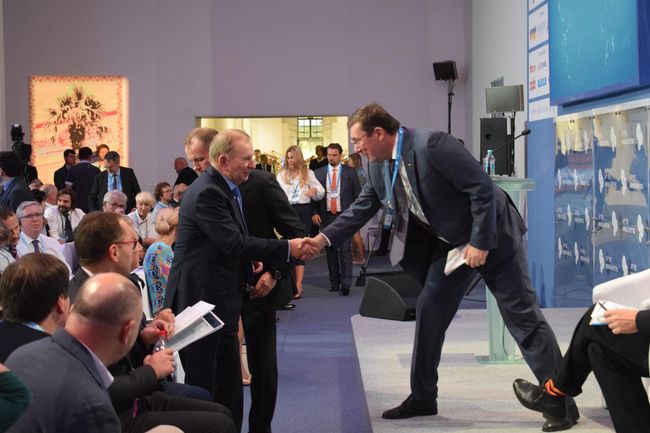 IT IS ALREADY TRADITIONAL FOR YURII LUTSENKO, ONE OF THE LEADERS OF THE “UKRAINE WITHOUT KUCHMA” PROTEST, TO SHAKE HANDS WITH LEONID KUCHMA / Photo from Oleksii BRATUSHCHAK’s Facebook page

That’s right, but why then has the Gongadze-Podolsky case become a taboo for Lutsenko, for he, as is known, carved out his political career on this case in particular? Do you remember who was standing next to Moroz and pushing the tape-recorder’s button so that the public came to know about the “Melnychenko tapes,” or his active participation in the “Ukraine without Kuchma” protest, or his promise, when he was the minister of the interior, to imprison those who ordered the crimes against Gongadze and Podolsky? But this is all in the past. Realities are different today, as are statements and behavior.

“It happens sometimes,”Den/The Day’s editor-in-chief Larysa IVSHYNA writes on her Facebook page. “The interlocutor is ‘on the crest of a wave’ and has almost convinced you, and you’d like to take a milder attitude. But there is a question a journalist asked. And that’s all. The carriage has turned into a pumpkin.”

So what did Lutsenko do? Asked by Vlashchenko if those who ordered the crimes against Gongadze and Podolsky will be named, the prosecutor general said: “I don’t know. I can’t say. We know very much now, but the key witnesses are dead and the only surviving one, General Pukach, is not, unfortunately, giving testimony contrary to everything, including my promise to ease his very harsh punishment. Pukach is in fact the last witness who could help investigators identify the crime organizer.”

“Mr. Lutsenko gave rather a generalized answer, while I would like him to be more outspoken in this situation,” Vlashchenko says. “Naturally, he holds a responsible office, and there are some inner problems in the prosecution office, which he perhaps has no right to disclose. Maybe, it is political moments. But one thing is clear: Ukraine has had more than enough time to have the Gongadze case fully investigated. And if there is no final result in the end, it is a political story, not the story of an open investigation and a desire to complete the case. The Gongadze case should have been closed and the crime organizers should have been named long ago. Everybody knows my stand on this. The case is not being closed because there is something to hide – that’s all. I can’t find a different explanation.”

In reality, Pukach helped investigators long ago and gave all the necessary testimony. Lutsenko is just lying brazenly. The prosecutor general already made similar statements in September this year, when he attended (not for the first time, incidentally) the Kuchma-Pinchuk YES forum. This triggered a certain reaction of the people who are directly involved in this matter. And, what is more, the main perpetrator of the crimes, Pukach, said for the whole world to hear as far back as 2013, when the judge read out the sentence and asked him if he agreed to it: “I will agree when Kuchma and Lytvyn are together with me in this cage.” 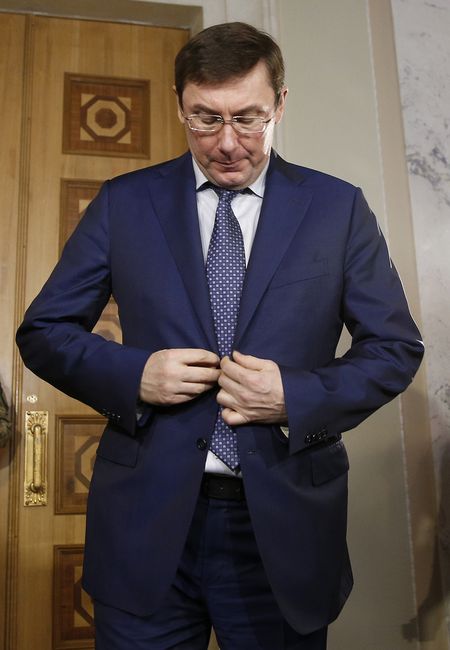 What other testimonies does Lutsenko need? Let us go into detail. Tetiana KOSTINA, the lawyer of the aggrieved party Oleksii Podolsky, said to The Day earlier: “The case materials, from pretrial investigation to the present day, when the case is at a court of cassation, give a convincing answer to the question of who really ordered the crimes against Gongadze and Podolsky. Pukach’s testimony remains unchanged. It has been the same during the investigation, the original trial, and the trials at the courts of appeal and cassation. Moreover, during the cassation court session on May 31, 2017, Pukach claimed that pressure had been exerted on him in all the years of investigation. There are some people who wanted him to change his testimony and not to name the organizers. When Judge Melnyk announced the trial court sentence on January 29, 2013, he asked Pukach if the sentence was clear to him. Pukach answered that the sentence would be clear to him when Kuchma and Lytvyn were next to him in the dock. But, later, these words of Pukach disappeared from the minutes of the trial court session. In this connection, the court of cassation ruled that the audio recordings of sessions at the Pecherskyi District Court and the Court of Appeal be declassified.

“The statements of Prosecutor General Lutsenko are simply shocking me,” Kostina continues. “Especially if you take into account that when Lutsenko took part in the program ‘The Right to Power’ of the 1+1 TV channel, he said there was some very important evidence in this case, which he thought would make it possible to complete this case and submit it to the court before the end of the prosecutor general’s term of office. So his current statements run counter to what he has been saying before. This raises important questions about the reasons why he made his recent statements, particularly in connection with the latest photo that shows him together with Kuchma who is justifiably suspected of issuing criminal orders in respect of Gongadze and Podolsky. Moreover, when Lutsenko says there are no witnesses left except for Punach, he is lying again. And the fact that the Prosecutor General’s Office is still illegally denying Podolsky the status of an aggrieved party in the crime organizers’ case, in contravention of Ukraine’s numerous international commitments, has long been off the limits of morality and law. Neither Pukach’s testimony, nor the ‘Melnychenko tapes’ have disappeared. There are the results of international expert examinations about who the voices on those tapes belong to.”

Oleksii Podolsky reacted more harshly: “All the evidence that Kuchma is a murderer can be found not only in depths of the Prosecutor General’s Office. There is quite a lot of it in the Pukach trial materials. Why did Lutsenko lie again precisely today? This is nothing but a public demonstration of loyalty to Kuchma and Pinchuk. At the same time, it is a signal of loyalty to the commitments he took for the murderer.”

To tell truth, this story is a glaring example of “distorted moral guidelines,” of which philosopher Serhii Datsiuk wrote recently. What is more, this applies not only to politicians, but also to some journalists. Their servility, venality, and unprincipledness have long been cultivating tolerance to evil. Therefore, unless the Gongadze-Podolsky case is put an end to, this country will continue to go down a false road in the entangled labyrinth of the past.