Political journalist of the year

Photo from The Day’s archives

The Days of Remembrance of the Victims of the Holodomor in Ukraine are to take place this weekend. Remembering millions of victims of the manmade famine, one of Ukraine’s greatest disasters, we are going through another dramatic stage of history – the war in the country’s east, the occupation of Crimea and a part of the Donbas. Thousands of the wounded and killed, one and a half million internally displaced persons, cold, starvation, and life under fire on the line of disengagement – this is the reality of today’s Ukraine. The enemy is shelling Ukrainian lands daily, and the media keep reporting the number of casualties. Children are becoming orphans, wives, mothers and fathers are losing their dear ones. As the situation in the east is being aggravated, the unlearned lessons of history and political populism pose now a new challenge to this country. This further emphasizes today the main principle of the James Mace Prize – active citizenship. The political journalists, for whom “honor,” “dignity,” “patriotism,” and “active position” are not just empty words, have become a serious factor in the “hybrid war” which the Kremlin unleashed against us and whose key element is informational aggression and propaganda.

Every year, almost simultaneously with honoring the memory of Holodomor victims, Den awards the James Mace Prize for Active Stand in Political Journalism. Founded by the newspaper’s editor-in-chief Larysa Ivshyna, the prize is conferred on those who promote the people’s historical memory and national identity as well as recognition of the 1932-33 Holodomor as genocide against the Ukrainians. This year the prize is being awarded to the political journalist of the year for the ninth time. In the previous years, the winners were the well-known journalists of and contributors to Den Ihor LOSIEV (2009), Ihor SIUNDIUKOV (2010), Serhii HRABOVSKYI (2011), Oleksandr PALII (2012), Petro KRALIUK and Volodymyr BOIKO (2013), Valentyn TORBA (2014), Ivan KAPSAMUN (2015), and Serhii TRYMBACH (2016).

“It is important today to take an active stand in political journalism. The centralistic model of state-individuals relations has failed in Ukraine. None of the groupings has monopolized the right to put across its viewpoint on the ongoing events and, accordingly, it is possible to choose and compare information. These things promote freedom. But social processes are not electricity switches, they are very inertial. Accordingly, the habit of thinking vertically has not vanished. It has disintegrated into a set of components in which you can see the recognizable features of the recent past. So it is not worthwhile to cherish the illusion that the gained values are irreversible and one can afford the previously unacceptable compromises in political journalism. The example of the neighboring Poland, the political processes that are unfolding there, are food for rather alarming thoughts about Ukraine. As a matter of fact, it is a never-ending discussion whose success depends on the personal responsibility of each participant,” says Volodymyr BOIKO, historian, political writer, James Mace Prize winner. “It is not only an achievement in political journalism as such. It underlines the author’s ability to be a citizen, his readiness to broach ticklish questions and say the things the majority does not yet accept, run the risk of being misunderstood (but somebody must be the first), and, accordingly, the ability to sacrifice for the sake of what you believe in. James Mace never accepted compromises for himself, but he lived and worked under the circumstances when he was forced to reach compromises with the outer circle. It was a payment of sorts for being able to write and publish what he deemed important. Moreover, none of the people who mingled with him had any doubts about his persuasions or judgments – he spoke straightforwardly and showed an open style of communication, as if calling on his interlocutors: do the way I do, and the country will change for the better.” 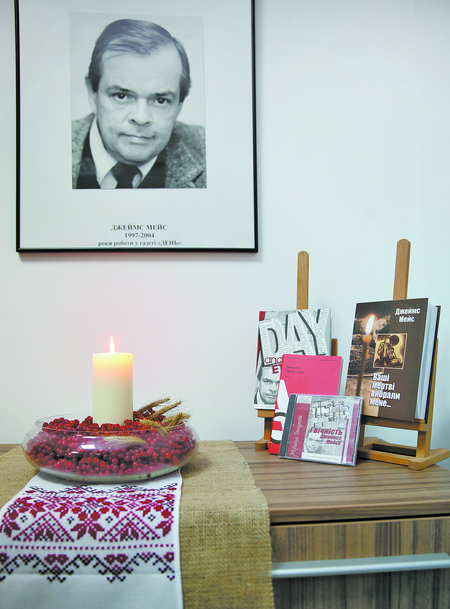 “It is always important to take an active stand in political journalism, in any political weather,” says Serhii TRYMBACH, film critic, James Mace Prize winner in 2016, “at least because it is the essence of the profession. Political journalism means publicizing your viewpoint on the ongoing socially important events in your country. This occurs very seldom now. More often than not, we are offered cockroach races or cockfights for the main purpose of distracting us from really important and vital problems. From dawn to dusk, we hear on several TV channels the unceasing jabber of the so-called political scientists whose name is legion. Their eyes radiate with the amounts of oligarch-paid fees. It’s the eyes of those who raised their heads from the feeding trough. These little political animals are so dependent on moolah.”

Unfortunately, we must conclude: all that the 2013-14 events really changed is dependence on moneybags. We are living in a feudal society, where there is as an “upper caste” of feudal lords who are above the law, above public control. They can kill and rape, steal billions, and buy their way out. They corrupt civil society, turning it – through their “agents of influence – into something dry, dull, and irresolute. Of course, circumstances force them to put on theatricalized shows which are feeding us daily with stories of the “triumph of democracy” – that’s perhaps all.

As far as I know, the James Mace Prize is in fact aimed at encouraging the free, unchained, thought of free people. Mace himself was this kind of man who spent all his lifetime trying to achieve a goal that involved no lucrative interests. His example proves a simple thing: a revolution of dignity is only possible if its leaders are free people. And whether the conductors of the current changes in Ukraine were and are free is a rhetorical question. Unfortunately…

The name of the James Mace Prize 2017 winner will be known on November 24. You can be the first to come to know it on Den’s website and our pages in social media.