Convert Dnipro into a center of classical music!

Austrian businessman Thomas Brunner initiated the creation of the Friends of the Dnipro Philharmonic Society charitable project, which intends to revive the temple of music. Brunner’s initiative did not appear by accident, since he has maintained close links with Ukraine for a decade and a half. The Austrian arrived in this country as a representative of a well-known company. Later he came to be engaged in agricultural business. Brunner’s family acquired a defunct livestock operation in the Cherkasy oblast, leased land, bought equipment, and furnished pigsties with the latest technology. Brunner patented his method of producing environmentally clean meat without the use of antibiotics and named it Tymoshivka after a Ukrainian village.

However, the Austrian is engaged not only in family business in Ukraine. He met here his “other half” – the beautiful Olha from Dnipro. Both Thomas and Olha are big fans of classical music. Soon after coming to know each other, the Austrian businessman invited the girl to a concert at the Dnipro Philharmonic and was shocked by the squalor of the premises. “I grew up in the Austrian city of Linz and have adored classical music, which is eternal and very much liked in Austria, since I was a child,” Brunner told us. “On visiting the Dnipropetrovsk Philharmonic for the first time in 2017, I was fascinated with amazing music being performed within its walls and... astonished by the terrible condition of these walls.” From that moment on, Thomas was fired up by a dream to create the Friends of the Philharmonic Club, which would help to enrich this center of culture and, at the same time, the whole city. Moreover, he was aware of such an example. “My hometown of Linz was an industrial city, similar to Dnipro, only 40 years ago,” Brunner recalled. “But the local authorities dreamed of changing the city’s appearance, turning it into a cultural center. It all began with the construction of a grand concert hall of the philharmonic on the bank of the Danube. The Linz Society of Music Lovers was established that united businessmen and philanthropists. This society contributed to the creation of a number of cultural facilities that influenced the city’s life. Now Linz is a very beautiful, comfortable city, one of European capitals of classical music.” Similarly, the Austrian businessman dreams of uniting residents of Dnipro, from ordinary citizens and businesspeople to representatives of the regional authorities, in preserving, reconstructing, and developing the philharmonic. In addition, the idea itself of reviving the Philharmonic was quickly picked up by residents of the city on social networks. 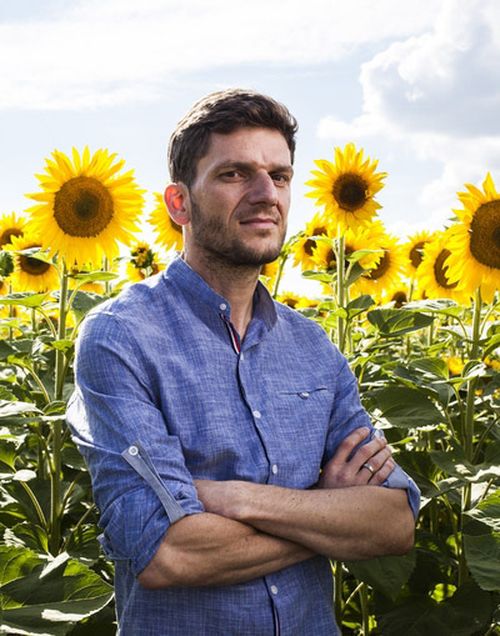 The first meeting of philanthropists and the philharmonic’s team took place in February this year. It was then, after the concert of a symphony orchestra, that they outlined plans for the future. In the near future, they intend to restore the old building of the philharmonic which turned 100 not a long time ago, enable musicians to get internships in Austria, and provide them with official accommodation. And finally, they aim to hold Ukraine’s first open-air concert of classical music, and in the long run, to establish a large-scale international festival of classical music in Dnipro.

Director of the philharmonic Ihor Khynich is very pleased to have public support. He recalls his first encounter with the Austrian businessman. “When Brunner first came here, to the philharmonic, he was horrified by the conditions in which one of the country’s best orchestras had to perform. From that very moment, he has been inspired with the idea of helping us. Gradually, he managed to create the Friends of the Philharmonic Club, which will help transform our culture center in the future,” Khynich said. The director agrees that assistance from philanthropists would help with many issues. Although, it should be noted that the regional budget allocates some money as well. For instance, it disbursed 23 million hryvnias for the reconstruction of the philharmonic in the last two years, according to the director. It was enough to fund preparation of a project for the reconstruction of the facade of the historic building, and the large concert hall is to be repaired as well. But these funds are clearly not enough to modify the philharmonic as a whole. “Our building is a nationally significant monument of architecture, it was built a century ago as the building of the Public Assembly at the expense of philanthropists. And the desire to unite businesspeople and officials to promote development of the philharmonic today is a bridge linking the past and the present through a philanthropic tradition,” Khynich believes.

The Austrian businessman himself says that after the first charity concert that was held by the Friends of the Philharmonic Club, it became clear that there were many like-minded people in the city who were ready to unite to promote preservation, reconstruction, and development of the philharmonic. “Dnipro is a very large and rich city. In Europe, classical music is prominent in such cities. To attain a deeper understanding of the challenges in this field, we began to communicate more with ordinary citizens as well as conductors and musicians. Also, we began to exchange ideas with leaders of cultural life, philanthropists and businesspeople, city and regional authorities, discussing how to support and develop the cultural center. I would like to note that during these conversations, I was very pleasantly surprised at how many people wanted and were ready to help us. Now our goal is to bring together as many like-minded people from different walks of life as possible, who understand what good classical music is and will be able to help it develop,” he said.

They have chosen two ways of expanding the circle of philanthropists: almost everyone can chip in, with minimum contribution set at 100 dollars a year for a private individual or 150 dollars for a family couple. For a large organization, this contribution should be no less than 5,000 dollars. On becoming a member of the club, everyone receives a reward – the right to attend exclusive concerts, and thus becomes a participant in the development of the philharmonic. The society resolved to attract major sponsors through advertising. Another option was proposed by the philharmonic itself for people who are ready to follow charity events, buy tickets and attend concerts. One of such charity concerts, called the “Revival of the Philharmonic,” took place just a few days ago. It allowed the institution to earn 62,000 hryvnias. These funds will be distributed to cover the immediate needs – a foyer reconstruction project and the purchase of a grand piano.