“Ever since my childhood, I have been capable of holding a tour of the exposition with my eyes closed...”

THE ODESA ART MUSEUM IS LOCATED IN THE CENTER OF THE CITY, HOUSED IN THE POTOCKI PALACE, A MONUMENT OF THE EARLY 19th CENTURY ARCHITECTURE (BUILT IN 1827). IT WAS OPENED ON NOVEMBER 6, 1899 THROUGH THE EFFORTS OF THE ODESA SOCIETY OF FINE ARTS

The appointment of a new director of the Odesa Art Museum was one of the biggest artistic scandals this year. As is well known, a competitive selection was held for the position, and the famous Odesa-born artist Oleksandr Roitburd won it by one vote last December. His rivals were former director of the museum Vitalii Abramov and his deputy Serhii Siedykh.

Nobody has challenged the result’s fairness. However, some murky machinations started as the date of the final approval came closer. At first, the culture commission of the Odesa Regional Council came forward to oppose the appointment. In parallel, a negative public relations campaign against Roitburd as an individual was launched in the media and on the Internet. They attributed to the artist other people’s paintings and brought in unknown experts to confirm it. It ultimately resulted in a failed vote in the regional council. Leaders of the notorious Opposition Bloc, in particular, the famous supporter of the “Russian World” Vitalii Sautionkov, were most active in the fight against the appointment, having marched a loyal crowd to a location outside the council building. Their arguments were worthy of the Soviet era, as the would-be director was being accused of creating immoral paintings.

At the same time, around 50 cultural figures, journalists, and leading museum workers signed letters in support of the artist. Eventually, everything ended with a victory of common sense: head of the Odesa Regional State Administration Maksym Stepanov appointed Roitburd as the director of the museum. The contract is valid for five years.

We talked to Roitburd in a public garden in front of the museum’s facade. 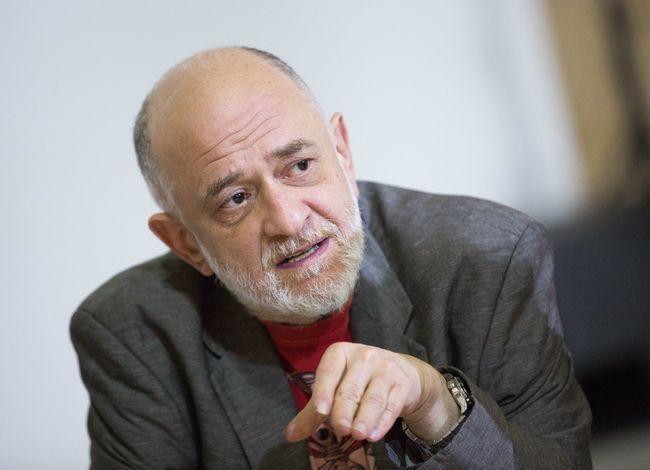 I will ask it frankly and at once: what led you to take this unenviable job?

“I had volunteers who supported the museum – some of them are now part of our team – visiting me and asking to persuade some people in Odesa or Kyiv to occupy this position. Meanwhile, a power crisis was continuing at the museum. It was unclear if the then director, Abramov, would be able to continue to carry out his duties, no constructive candidates could be found, and it ended with no one getting persuaded, so I decided to go for it myself. Another motive was that I realized that I had no right to criticize Odesa if I myself rejected an opportunity to change the situation in a certain area at least and get a serious project working that would improve both the image and the life of the city.”

What is your personal history with the museum?

“I have known it from childhood. Even back then, I was capable of holding an imagined tour of it with my eyes closed at home and could say where which picture hung. However, when I came there again at an older age, I did not really like the fact that some items hung in the same locations for 40 years. And in some places, the exposition was even worse than it had been in the Soviet days. The impression was that life was over and it seemed to be a cemetery. It was so although the museum can become not only a center, but even a flagship of cultural modernization, which Ukraine direly needs. Determining after three or four centuries who was right and who was wrong, what was a betrayal and what was a victory – this is absolutely destructive. The future belongs to countries with a vision of that future, with a rational economic concept of development and a progressive cultural policy. Moreover, the latter includes not only art, but also the positioning of the country in the world, education, health care, etc. For now, however, we have not yet cut the umbilical cord linking us to the Soviet system, nor even finally cut one linking us to Russia.”

As to the past: in what condition did you find the museum?

“First of all, I found a labor conflict there. Most employees feared the arrival of a new leadership.”

So, how did they react to you?

“I expected this least of all, but these grannies and veterans of the museum became my supporters. I have a very friendly relationship with the chief custodian of the collection, who has miraculously preserved it intact. She has worked in the museum for 50 years, and there have been no losses on her watch. Also, all of them have the understanding that something needs to be changed.”

What should be changed?

“The main problem is the limited resources. I have just fantasized with architects how to increase the exhibition spaces. This is extremely important. If the museum expands threefold, it will become 30 times more interesting. We have many art periods concealed in storerooms, and nobody sees them.”

Have you managed to locate some special treasures?

“There are so many first-class paintings in the storerooms that the very idea of the level of this collection can change dramatically. There are dozens of landowners’ portraits taken from their estates, naive city portraits, many great paintings by Russian Academic style painters, which are not known even in Russia itself. For example, a meter-long picture by Ilya Repin which we have pulled out of the storeroom, and nobody knew that Repin had painted one. Or Vasily Perov’s A Shepherd Boy, which has uncharacteristic features for a work of his. Under the influence of the Peredvizhniki, he depicted hard life of the masses, but here we see such an idyll: an Italian boy sits amid southern plants under the blue sky, he is clean and happy, playing a flute, wearing a European dress – it is all absolutely atypical. It lay in the storerooms, and nobody knew about it. And how many works of the Mir Iskusstva Art Association we have! Experts are just exhilarated when they learn the number.”

What prevents you from exhibiting it all?

“We lack space. We cannot adequately display Socialist Realism works – while monstrous, this style has already become interesting – or fully present our collection of Soviet underground, also known as the ‘severe style,’ which we also have in storage. We cannot start collecting contemporary art, because there is no room for it. We cannot turn the museum into a true cultural hub, because there is no place suitable for a lecturer. We need to do major repairs, because I have seen a map where five large cracks, both horizontal and vertical, are visible in the building. After all, it was built from coquina in 1827. Since then, it has not been repaired other than cosmetically. We fear that beams between floors will not hold human masses. Just outside exhibition rooms, we have a fire reservoir, which is decommissioned, defunct, but still full of water, and it brings excessive humidity to three rooms and our holdings. And at the back of the museum, there is a wild thicket, full of homeless, drug addicts who leave drug caches there, and broken glass that makes it impassable. Still, we have been unable to reach the city’s leadership and ask them to donate this plot to us for expansion, because it belonged to the museum back in the 1970s, but was then transferred to the city’s ownership to save on janitors’ salaries.”

It seems to be an insurmountable mountain of problems... What have you achieved in such circumstances?

“Firstly, we have increased the attendance level of the museum many-fold. Secondly, we have done a partial rotation of the exposition. Also, we have been demanding that bureaucratic bodies compile design and estimate for the repair of historic lights, but still have not received the final approval to begin repairs.”

And what has prevented the major repairs from being started?

“The government had allocated money for it once, but the firm that had got it went bankrupt, its owner is now on the wanted list, the remainder has been redistributed to other places, and no more funding is provided, because it has already been provided.”

Everyone remembers in what atmosphere the decision about your appointment was made. Do you encounter direct resistance?

“They oppose us through bureaucratic bodies, which do not sign anything if they can help it. This is the passive option. As for the active one, those councilors who staged scandals back during my appointment hearings are still attacking me. Their, so to speak, leader Vitalii Sautionkov dominates these efforts.”

Do you have a specific strategy aimed at overcoming all this?

“No strategy can be formulated, because it changes on the move, depending on where the next pitfall appears, and where we get new allies or opponents at the given moment. Sometimes it looks almost like guerrilla warfare.”

Where do you find strength for it?

“If there is a stimulus, then I am interested in working. The most valuable part of this job for me is being a visionary.”

Do you find time to create paintings of your own?

“I do. However, they accused me of replacing paintings from the museum with fakes (while keeping a completely impassive face). I am now actively engaged in this, I am making a new series to replace the museum paintings. This morning, I had time to finish one, I will add some yellow color, take a picture and post it on Facebook. Yesterday, I replaced the portrait of Serov with the portrait of Savva Mamontov painted by Serov, and today I will replace a painting by Nikolai Ge, which is quite natural. And as they have already said, I will then sell all the originals to Maryna Poroshenko or the banker Vadym Morokhovskyi – these are two competing versions.”

Finally, I should ask you about hope. Where is hope for you and the museum?

“I hope that instead of an archaic Soviet institution, we will build a modern museum, which will change the perception of Odesa as well as what a museum is in Ukraine. After all, the potential of such an institution as a museum is enormous. It is just that people do not understand it in this country.”

Oleksandr Roitburd (born in Odesa in 1961) is a Ukrainian artist. He graduated from the art and graphics faculty of Odesa Pedagogical Institute in 1983. Since 1993, the painter has been a founding member of the Nove Mystetstvo Association (Odesa). In 1993-99, he served as art director and in 1999-2001 as president of this association. In 1997-99, Roitburd served as chairman of the board at the Soros Center for Contemporary Art (Odesa), in 2001-02 – as regional coordinator of the Cultural Heroes Festival (Odesa), while in 2002, he served as director of the Gelman Gallery in Kyiv. The artist has taken part in over 100 exhibitions and art projects.