How the “face” of the plays emerged

Set design is the anticipation of theater, like a visual manifest of an idea, a clean white sheet of paper where the life of the future play begins. Such idea can be traced in the decoration of the exhibit “Triennial of set design named after Danylo Lider” which will be open for admirers of theaters at the National Museum of Russian Art for nearly a month. There is only the title inscribed on a large white poster. And nearby on an easel there is a sketch of the master’s drawings to the play Yaroslav the Wise at the Ivan Franko Theater. At the center of the drawing there is the image of Maria Orans who seems to bless this exhibit and all of its participants.

The school of Ukrainian set design founded by outstanding master of set design Danylo Lider (1912-2002) is valuable above all due to the fact that he set a unique professional direction which enables his numerous students to follow the principles of mastery, continue his manner, develop, transform, interpret the foundations of the creation of the artistic image of the play.

The exposition “Triennial 2016” is a kind of report of well-known Ukrainian artists about the set designs they have created over the past three years. It should be noted, the list of the participants’ names is expectedly tradition. The exposition of the specialized exhibits always presents the active artists who work mainly in the capital theaters. So, Maria Levytska’s style can be guessed from the intricate-academic set design she created for operas and ballets at the National Opera House. Andrii Aleksandrovych-Dochevskyi is represented by the contrast sketches of set designs of the complicated constructions of the transformer bridge with numerous meanings and allusions in Erik XIV and mysterious pagoda-windows between two worlds, civilizations, and cultures in Idzanami. Volodymyr Karashevskyi offers an interesting system of versions of moving the curtains in the play A Star, or Intoxication with Theater, and Kateryna Korniichuk in the play Molieriana depicted the present opposition of the times of Moliere and Bulgakov, making black and red adversary colors, which symbolize the tragic destiny of the writer and playwright. 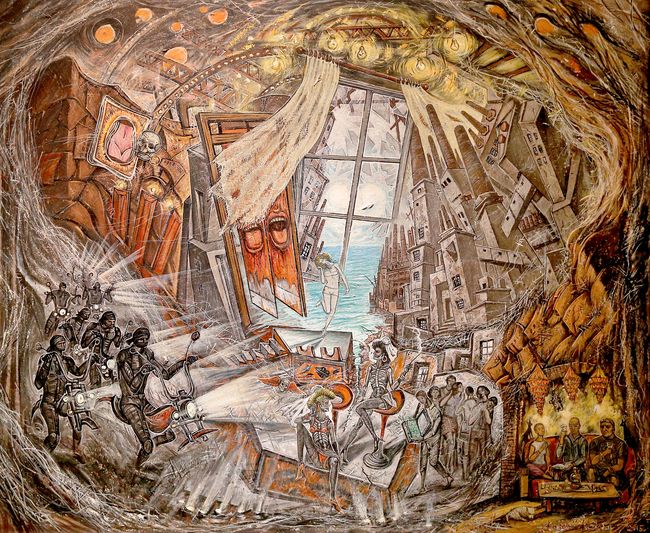 A SKETCH BY ANDRII ZLOBIN TO THE BALLET GISELLE, 2016 (KYIV MODERN BALLET) 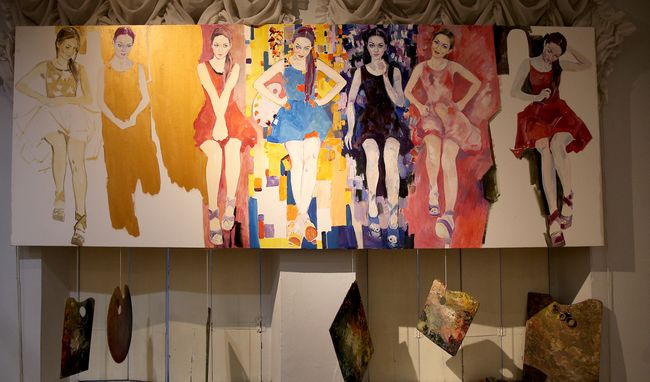 INSTALLATION BY OLEH LUNIOV TO THE PRODUCTION OF WAITING FOR GODOT, 2016

The exposition shows all the stages of work of set designer and costume artist: sketches, decorations, costumes, prepared dummies, billboards, author’s posters, photos, various collages, graphic works and paintings, real actors’ costumes, masks of the characters. Knowing how everything comes to life in the play, one can see how important the visual art in theater is. It is able to dominate the process of creating the play. And it is clear how necessary is the subtle feeling of the material by the artist, its harmony with the director. 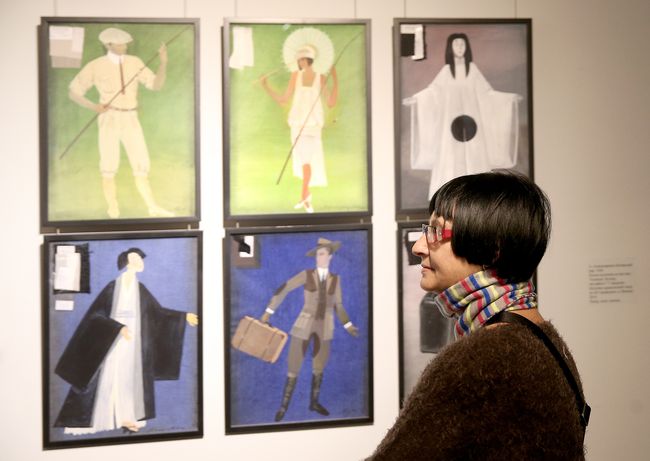 The realization of the set design presented at the exhibit is seen at nearly all Kyiv theaters: Ivan Franko Theater, the National Opera House, Lesia Ukrainka Theater, Theater in Lypky, Operetta, Young Theater, Children’s Music Theater, Kyiv Modern Ballet, Theater of Drama and Comedy on the Left Bank of the Dnipro, Koleso, National Circus, Action Center, and even at Les Podervianskyi’s daring theater, as well as in theaters of Vinnytsia, Chernihiv, Dnipro, Odesa, Magdeburg, etc. 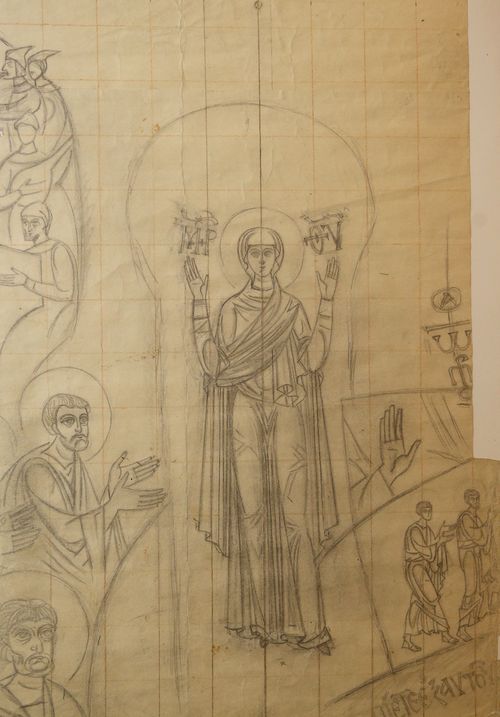 A SKETCH BY DANYLO LIDER TO THE PLAY YAROSLAV THE WISE (1970) AT IVAN FRANKO THEATER. AT THE CENTER OF THE DRAWING THERE IS AN IMAGE OF MARIA ORANS WHO SEEMS TO BLESS THIS EXHIBIT AND ALL OF ITS PARTICIPANTS

Although the exposition is quite voluminous, because 40 artists are presented there, it is impossible to make an opinion about the situation with the Ukrainian set design. It is obvious only that present-day theater is quite versatile with a very variegated palette of colors. The artists use various techniques, forms, approaches. They turn to national traditional motifs and ultramodern trends. All this makes the set designs and costumes look sharper and have an effect on the fabric, technique, angles, and approaches, they generate their own style and continue the traditions of the school founded by Danylo Lider. This is proof that any school is not a dogma, a rigid form one has to follow and copy. A school is a possibility to use the foundations to create the original world of your own. By visualizing of the future plays, set designers and costume artists create the new world of the Ukrainian theater. The chain of the generations must not be broken and the ranks of merited and renowned theater artists must be replenished by new artists. For example, the creative work of young artists could be displayed at the next Triennial, which would be a worthy continuation of the line of art set by Danylo Lider.