“Literature which is ahead of its time”

DEN’S NEW PUBLICATIONS WILL BE PRESENTED AT PUBLISHERS’ FORUM IN LVIV NEXT FRIDAY, SEPTEMBER 11, AT 12:30 IN THE MIRROR HALL OF THE POTOCKI PALACE (15 KOPERNYKA ST.). BOOKS CAN BE ORDERED RIGHT NOW ON THE NEWSPAPER’S WEBSITE / Photo by Mykola TYMCHENKO, The Day

In this season Den has prepared an unprecedented repertory of new publications. Soon at the Publishers’ Forum in Lviv as many as four of the books will be presented, edited by Den’s editor-in-chief Larysa Ivshyna: Return to Tsarhorod (compiled by Ihor Siundiukov), “Trap,” or A Case without a Statute of Limitations from the series “Contemporary History for Dummies” (compiled by Ivan Kapsamun), Catastrophe and Triumph. Histories of Ukrainian Heroes (compiled by Maria Semenchenko), and I, an Eyewitness. Notes from Occupied Luhansk by Valentyn Torba. Our readers are invited to the presentation, which will take place next Friday, on September 11, at 12:30 in the Mirror Hall of the Potocki Palace (15   Kopernyka Street). The presentation will be attended by Den’s editor-in-chief, authors, and compilers of the publications. In the meantime, we offer reviews of the first owners of the new books. (Oxana Pachlovska’s review was first published in Den’s glossy supplement Route No. 1, My Book, No.8 (35).) 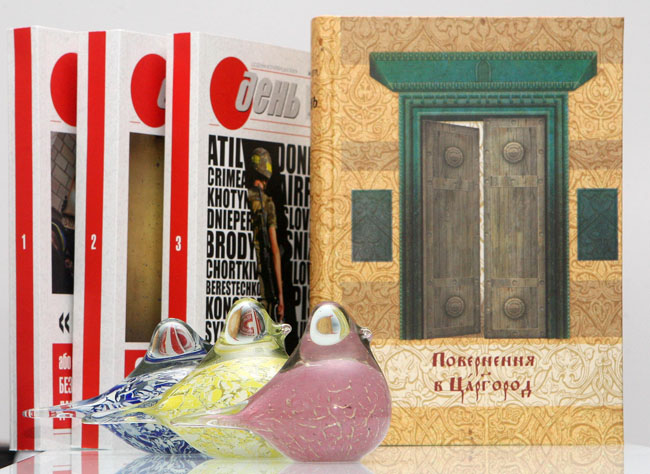 “DEN IS THE NEWSPAPER FOR ME, I TRUST IT THE MOST”

“At home I have probably all publications from Den’s Library, they occupy a place of honor there. I try to get as many people as possible interested: my friends, my acquaintances. Den is the newspaper for me, I trust it the most. It is so warm, and here I find answers to my questions. That is why, as soon as I learned of the most recent publications, I ordered them all. I hope to share them with other people from my circle, so that I can share my impressions with someone.

“Den raises extremely topical issues. There is no escape from them, you cannot stay aloof. I cannot help wondering about what is going on, and feeling with the nation. If I were younger, I think I would be on the front. There was a time when I did not care for politics, and now I am just addicted. ‘Where can we hide from politics? It has occupied our souls,’ as Lina Kostenko wrote. This is probably such a special stage in our life.

“Everything depends on whether you have all information, whether you are capable of drawing conclusions on your own. Thanks to Den and in particular to the book Catastrophe and Triumph. Histories of Ukrainian Heroes (compiled by Maria Semenchenko), I learned about Artur Stepanenko (whose callsign is Sokil). It turned out that this soldier is almost my neighbor. He went to school in Kozhukhivka, Kyiv oblast, and I live across the river, in Danylivka. I hope to meet him soon. I feel his radiant figure even at a distance, as vibes of energy. I voted for his photo at Den’s recent photo exhibit.

“When I saw “Trap,” or A Case without a Statute of Limitations (compiled by Ivan Kapsamun), with Kuchma’s photo on the cover, I even did not feel like opening the book at first. But then I understood that I must do it. In my opinion, Kuchma’s involvement in the Minsk talks is nonsense of epic proportions.”

“DEN’S PUBLICATIONS HELP UNDERSTAND THE REGULARITIES OF OUR HISTORY”

“We have for a long time supported Den’s book projects. Recently we have bought Ukraine Incognita, The Power of the Soft Sign, and other publications for schools in Luhansk oblast. Den publishes literature which is ahead of its time. I believe that today it is very important to make this information available to as many people in all regions of Ukraine as possible. It would be particularly useful if our policy-makers would read these books. They typically have a rather dim view of Ukrainian traditions, culture, and true Ukrainian history. They need Den’s books close at hand. They must study them, read them, and most importantly, draw conclusions. They must draw conclusions from Ukraine’s history and recent events, and thus tweak their activity. As we see, there are certain regularities in our history, and they must be interpreted. Here Den’s books come in extremely handy. That is why we are always ready to closely cooperate with this publisher. When we take volunteers’ help to the east, we always make sure there is not only tinned food, but also food for thought. Den’s books are intellectual ammo. They explain clearly why people die for freedom, why we suffer losses, and why one should nevertheless defend one’s country.

“Recently I and Mykola Hrytsenko, president of the Charitable Foundation in Support of the Newspaper Den’s Initiatives, discussed the themes worth exploring in the subsequent publications. Mykola told me that nearly all of them have been already examined in your paper’s latest publications! It is great to be like-minded. Den is Ukraine’s No.1 newspaper!”

“WHILE MOSCOW WAS PLANNING ITS AGGRESSION, WE WERE FOOLING AROUND”

“I bought Valentyn Torba’s book I, an Eyewitness. Notes from Occupied Luhansk because I know the author personally. We are fellow villagers and friends. As a journalist, he traveled with the tour ‘Support Our Men,’ which I organized in the ATO zone. Valentyn saw with his own eyes how it all began in Luhansk. The book is a fascinating read. Thanks to it, I came to know about Den’s Library. When I finish it, I will make acquaintance with Den’s other publications. I respect Den’s editor-in-chief, Larysa Ivshyna, as a person, as a journalist, and as a very intelligent lady. In Torba’s book I made a lot of discoveries, even if I had studied all these matters before.

“Now I go to bed every night and wake up every morning thinking about the war, because my brother and my son are on the front line. Sadly, I have to admit that our authorities have surrendered Donbas. While Moscow was planning its aggression, we were fooling around. It all started long, long ago, no later than 1990. Suffice it to remember the movie Brother-2. I remember I was assaulted when I came to Sievierodonetsk from Kyiv, after the Orange Revolution. My own friends beat me up! When I returned to the capital, I told everyone, ‘Guys, something fishy is going on. When I arrive in Lviv and speak Russian there, everything is fine. But home in Sievierodonetsk, they will not sell me fruit at the market because I speak Ukrainian!’ When I said a few words in Ukrainian at a store, I got dirty looks from everyone. As far back as in 2004, inhabitants of Luhansk were prepared for Russian occupation. And we did not care! At the beginning of the aggression in Donbas the police, security service, and other power-wielding agencies were ready to defect, almost all of them. Had a dozen of armed militants come to Cherkasy, Cherkasy too would have been surrendered. This is what Valentyn Torba’s book is about, among other things.”

“We are returning to Tsarhorod is a bold and risky formula. For the main question is: to which Tsarhorod? There is Constantinople, one of the world’s capitals of Christianity. There is a city as a symbol of caesaropapism which opposes the Western tradition of separation between the power of kings and popes. A radiant and insidious city that split the Ancient Roman civilization and the Christian world. A city that looked down on its cultural colonies, including Kyivan Rus’. The city whose emperor ambitiously proclaimed that the sultan’s turban is better than the pope’s tiara and thus reduced the great Byzantine Empire to a symbolic patriarchate on the outskirts of a powerful Turkish state. The Crescent got the upper hand over the Cross.

“The Byzantine Empire was an eternal dream of Russia, with Catherine II planning to build a ‘Greco-Russian’ world with Constantinople as capital. But it is also one of Ukraine’s spiritual fatherlands. Ukraine is a historical territory of the Constantinople Patriarchate, torn away from it through deception and violence. For, by contrast with Russian Orthodoxy, Ukrainian Orthodoxy is part of the European civilization – first of all because modern Ukrainian culture was forming in a Polish-European context for centuries on end. It is the main neuralgic node of Russia’s war against Ukraine. No, it is not just the Kremlin-armed criminals who hold sway in Crimea and the Donbas. It is a rabid Third Rome, which is unable to live in a modern time, cannot find its place in the darkness of centuries, and is trying to overcome the Western civilization which had its origin in the First Rome.

“The symbolic Constantinople is between Kyiv as ‘second Jerusalem’ and Moscow as ‘second Sarai.’ And why not, if such a purely ‘Orthodox civilization’ is building Eurasia under black flags that depict Genghis Khan?! Russian Orthodoxy is a pseudomorph of the Byzantine one. Caesaropapism matched with Mongol governmental centralism spawned as a result this chthonic monster of Muscovite power with its eastern nomadism and a thirst for taking root anywhere its weapons and the boots of its soldiers can reach. Religion has no autonomy here – it is just an instrument of power. I wonder if the Russians know that their main statespersons – Ivan the Terrible, Peter I, and Catherine II – in reality hated the church and were destroying its moral foundations so much that all the Bolshevik commissars could do was blow up temples, for they no longer lived in souls?

“What is more, Christianity is one of Europe’s basic cultural codes. Breaking away from Europe, Russia thus took Orthodoxy outside Christianity, turning it into an intellectually and morally unviable ideology, which has nothing to do with faith. The conqueror of Constantinople, Istanbul – the First and the Last, – is now more European than Moscow, ‘the Third Rome.’

“Russia’s mono-religiousness is opposed to Ukraine’s multi-confessionalism. The ‘identity of views’ is something opposed to the living tissue of continuous establishment, choice, and reflection in the religious field of Ukraine. The Greek Catholic Church, which used to save us at various moments of historical existence, is a unique emblematic attempt to synthesize Western and Eastern Christianity. And a split between them is the cause of many troubles in today’s Europe. Pope John Paul II said about this: a true Europe is one that will breathe ‘with two lungs.’

“In its current development, Ukraine can save Orthodoxy by turning it back ‘to its sources,’ provided they are modernized and updated, – otherwise, Eastern Christianity will run the risk of finally losing to its Western counterpart intellectually and morally.

“We should also remember that the choice of the Byzantine Empire also hindered, to a large extent, the historical development of Ukraine, watered down its identity, and further promoted the imposed isolation which became the principal paradigm of Russian history.”

“The book Return to Tsarhorod, which Larysa Ivshyna conceived so boldly, addresses these boundlessly difficult problems. The newspaper Den’s new book is a brilliant instrument for a so indispensable revision of the basic elements of culture and identity. It is only the beginning of a discussion, an invitation to dialog. But the discussion will only produce a real result if we remember that our road is really a synthesis between the West and the East. This may be Ukraine’s civilizational mission, but we can only accomplish it if we reconsider all our cultural canons via an axiological and categorial network of the European civilization.

“This book should go not just to an abstract reader but to a target-oriented reader, starting from schools and universities. This topic is a key that can open a lot of rusty gateways of history.”