The lofty and the lowly

The exposition shows textile canvases and overcoats manually embroidered by the artist and designed together with Lili Bratus. Also on display are brand-name wigs. Anastasia Podervianska was born to the family of well-known artists Les Poderviansky and Svitlana Lopukhova in 1978. This became quite a challenge for the talented girl. Apparently, children of famous people always come across the existential problem of feeling their uncommonness and difference from parents, the choice of their own way, and the sad necessity of proving that you are not they. For a famous name only helps in the beginning and then becomes an obstacle to overcome.

COLLAGE AS A CONSCIOUS GAME WITH OBJECTS

Anastasia turned from a fragile little girl into a no less fragile but, at the same time, a strong and beautiful person who perceives the world openly and reacts to it assertively and creatively in various situations. She can enchant you with feminine attractiveness and artistry by making photo compositions in the shape of postcards, express her opinion in a picturesque and collage-style way about very intimate and, at the same time, historic events in the project “Dream of a Butterfly Heterocera,” or sink deeply in the rhythms of a locality and “catch the inimitable rays of sunlight in combination with color, and feel the emotions of discovery again” when traveling across Ukraine (“Mediterranean Ukraine”). She can also hit back physically as a daughter of her father (one of the first kung fu masters in Ukraine), winning the European traditional wushu championship in Tbilisi last year. What an integrative nature, isn’t it? Now it is clear what brought about this demeanor, a discreet grace of movements and unconstrained postures, a convincing expression, and determination to blaze her artistic way. 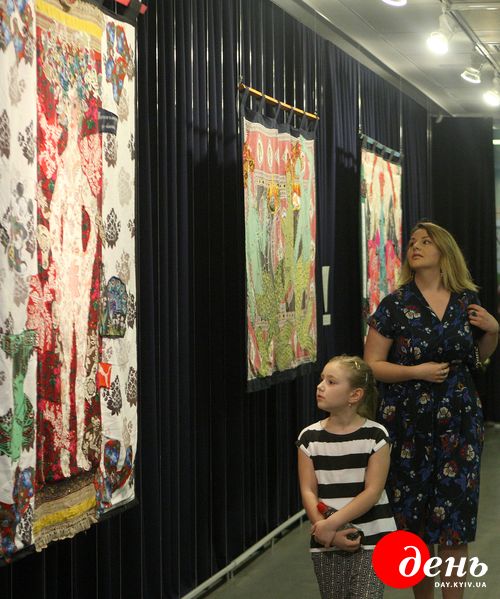 Collage, as a deliberate game with objects, elements, and senses, has been accompanying Podervianska in all her artistic lifetime. This is a provocative and insidious type of creation, for it seems to be very simple – just put together as many elements as possible. But, by contrast with a homespun thing, a piece of art conveys not only the idea, not only the process, but also the quality of expression and, what is more, the result that contains an uncommon integrative image. Podervianska creates her own cosmos, combining nontraditional components unexpectedly but harmoniously. The combination of elements that differ in the time and technique of making is so natural in Podervianska’s compositions that you can understand the inscrutable integrity of existence which can digest and put together foreign bodies in a new expression. After all, we have, as usual, a cocktail, a mixture, a combination of the most unexpected. But, for some reason, the expressions and images the artist begets impress deeply and open up new meanings to those who can not only look, but also see and reflect.

The depth of impression and emotional richness of a work make themselves felt gradually, for they are caused by innermost moments and motions in the “life” of compositions filled with overt and covert meanings. 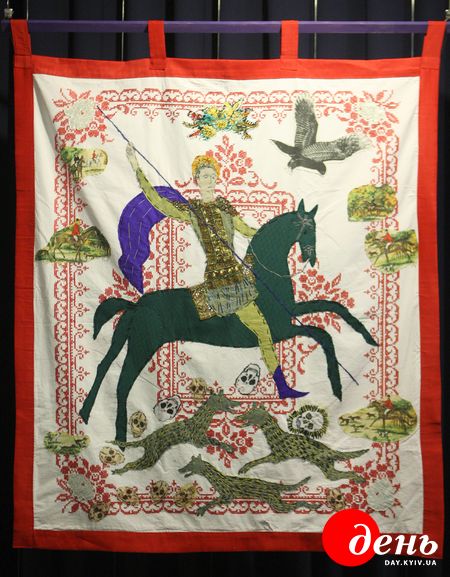 The “Country Horror” project displays extremely sensitively and acutely the childish, naive, primary, and, hence, untarnished world-view and spiritual reactions of an individual who is not alienated from earth and nature bodily, spiritually, or mentally. This quality clearly shows in Heorhii Bulashev’s incomparable “Ukrainian People in their Legends, Religious Views and Faiths” published in 1909. Podervianska’s original textile “illustrations” to this book became a mighty series of valuable pictures that overgrew the primary source, subtly complementing, not defying, it. The artist applied her own technique of collage. She thinks in terms of art but uses not so much paints as colored patches, organized elements of folk embroidery, ornaments of old-time ethnic attire, hand- or factory-made lacing, and prints borrowed from modern clothes or decorative fabrics. 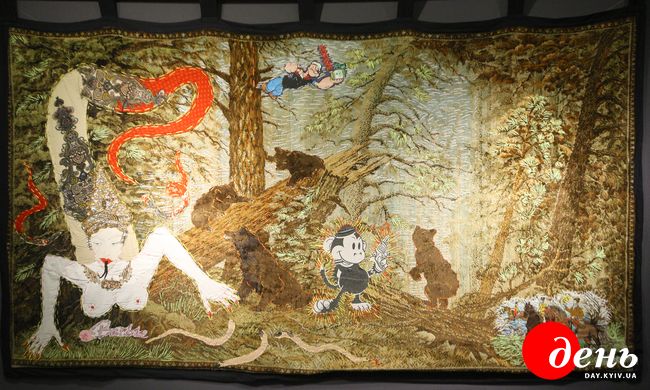 For example, a carpet from the flea market, a plaid on the home sofa, or a burlap on the floor of a Hutsul house easily serve here as the basis of a picture. Since the Renaissance, painters have willingly used imprimatura to reach a harmony of colors in the future picture. What serves as imprimatura in Podervianska’s works is the grounding with an already marked drawing, colors, thematic scenes, and texture, which determines the appeal of the overall composition and the vibes of spectators’ reactions. Reflecting on every element or detail, the artist imparts a new coloring and meaning to it. The picture thus assumes a general semantic tonality which is consonant with the content and emotional poignancy of the concept. 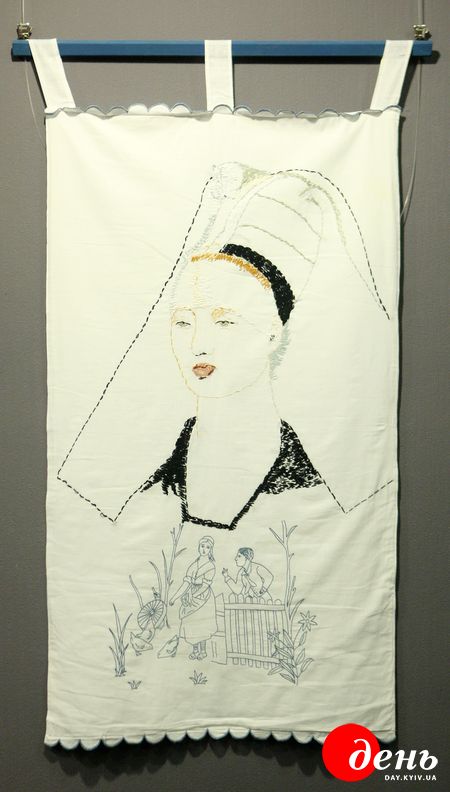 Collage became especially popular at the turn of the 21st century owing, to a large extent, to the information boom in all the spheres of human life, excessive production, and the emergence of new materials and technologies. This is why collage as such became extremely multifaceted. Podervianska continues to follow the line of semi-archival, semi-domestic collage rich in the layers of profound meanings, as was once typical of Sergei Parajanov’s collages. While some are making showcase dumps of mass-consumption rags and speak of environmental danger, some are putting up decorative billboards, and some are weaving carpets. Podervianska is creating figurative genre pictures. 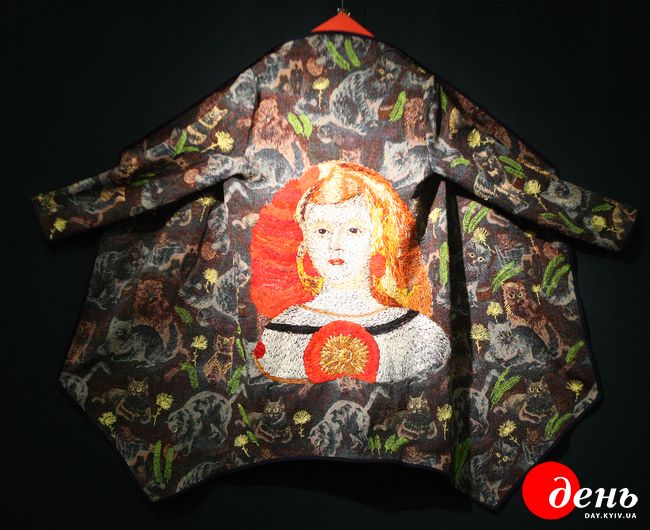 In each of her works, the young artist shows the way the canvas “submerges and surfaces” and invisibly compels the spectators to follow all the phases of her discoveries or probable expressions. This sincere and perhaps even naive trust in the spectator helps the artist very much to open up because it is always about the innermost. And, to achieve this, the artist uses a detailed spiritual narration, rather than trendy minimalist formulas, with emphases and certain mystery. Such nostalgic and heartfelt narratives for adults, shown in the style of medieval chronicles or a country horror novel, may otherwise resemble the light ironic prose that hides deep affection for the object (“Overcoat: a Portrait”).

The objects “Overcoat: a Portrait” (2017), displayed for the first time in the White World Gallery, show the copies of the best-known works by world-famous celebrities manually embroidered by Podervianska on the overcoats designed and sewn by Lilia Bratus. To make a copy of a great master for the first time is apprenticeship, next time it is impertinence, and later it is deliberate research and a dialog with the Teacher, especially if you do this with different materials, applying unexpected techniques, taming the idea and filling it with a new content. These portraits are no longer just portraits but a sight for sore eyes, a talisman for one who wears this apparel, a piece of exotics, and an extravaganza. The experience of working as stage designer, particularly in making costumes for the grotesque theatrical productions of her father Les Poderviansky helps the artist turn clothes into a piece of art. This resulted in the collection of a bit grotesque haute couture. But, to tell the truth, haute couture models almost always tend to be grotesque because they resort to exaggeration in order to emphasize the idea. 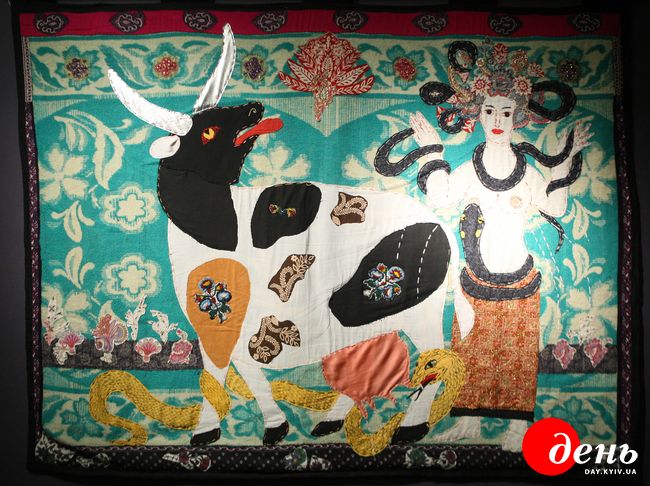 The “New Icon” series (2017), made in cooperation with Tetiana Rusetska and displayed at the Voloshyn Gallery, shows the artist’s detached and attentive look at the transformation of the purpose of a traditional icon in the mind of a contemporary, when it sometimes turns from an instrument of religious cult into just an amulet, a picture, which an ordinary citizen uses as an ornament, a part of his humdrum life, complemented with “non-canonical” texts and images, comic captions, and topical thematic lines.

“Adventures in a City” (2018), displayed for the first time in the Triptych Art Gallery, is also manually embroidered on textile. The combination of elements, surprisingly heterogeneous in time and technique, is so natural that you become aware of the unfathomable value of existence that can digest foreign bodies and express them in a new dimension. As a result, we get a cocktail, a mixture of the most unexpected things that impress deeply and open up new meanings to those who can not only look, but also see and reflect. The canvas “Endearments” on the cover of an album seems to have been grown out of this urban saga and prompted the author to think of a new series of pictures.

The lofty and the lowly, the naive and the professional, the highly confidential and the profane – this strong cocktail of Anastasia Podervianska’s compositions will, of course, turn your head on closer examination. You will get drunk without wine and walk around crazy of the surprising feeling that your heart touched something innermost.

The exhibit will remain open until June 20.

Olesia Avramenko is an art critic