Project “LUUK” is now presented at the TSEKH Gallery in Kyiv. The name stands for “Luhansk Ukrainian.” The exposition includes works by Yaroslav Derkach, Zakentii Horobiov, and Serhii Lykhovyd. All three come from Luhansk oblast, which they left at various times and for various reasons. They have known each other a long while, and now they come up with a joint project.

“TO LET PEOPLE SEE WHAT THEY WANT”

Where do the stairs that do not go up lead? Next to them are confusing traffic lights, without the conventional green, amber, and red. There are no rules, climb as you wish. If you wish. Upstairs you will face a competition, held according to strange unwritten rules. They are symbolized by new Olympic rings. Here this symbol includes not only circumferences, but also a triangle and squares. The symbol of intercontinental equality is falling apart. Actually, the Olympics themselves, revived in the 19th century to promote the spirit of fair, non-violent contest, not infrequently turns into a demonstration of wealth and power, or even of the progress in pharmacological industry.

The laconic metal objects, described above, are part of Derkach’s cycle “Shape.” “In my view, the problem of the conventional symbols is that their semantic load is eroded. They are used universally, but what do they stand for?” Derkach muses. “My approach is to choose well-known symbols and transform them in some way, letting people see them from a new angle. I interpret these symbols in a certain way, but this is my vision. The simpler the shape, the more room for associations. I give everyone room to see what they want to see.” 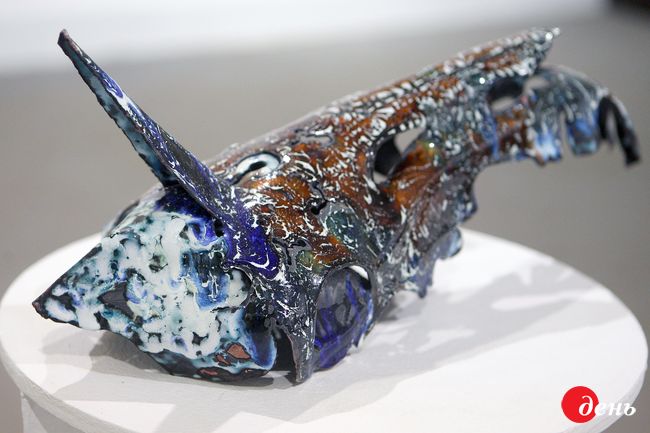 The artist has long worked with metal. This is unprocessed steel, which would be corroded with time. “Such material speaks for itself. It is heavy, it has an own character, and it is convincing,” Derkach explains.

“I WANT UKRAINE TO RESEMBLE MY POSTERS”

When rules are broken, one could look to common virtues and own principles for guidance. Opposite Derkach’s works is the series “Atisha” by Horobiov. The author, graphic designer who works with Cyrillic fonts, broke the maxims by Atisha, a Buddhist thinker and preacher, into parts and visualized them. “Tranquility of mind is the ultimate good,” “The most important quality is working for others,” “The most useful effort is free from expectations,” etc. Sometimes the letters are barely readable, they are perceived as abstract symbols.

“At first, a person can perceive it superficially, they focus on the form, and dwell on the meaning later,” says Horobiov. “I chose such a form because I wanted to play with human perception. I am interested in Buddhism. Back in Luhansk I had many friends who frequented the local Buddhist center, but I had ignored that for quite a long while. But when in Kyiv, I decided to give it a try. Buddhism appeals to me due to its rationality, explanations of the essence of things, it gives a real scheme of problem solution: your own problems as well as those of others.” 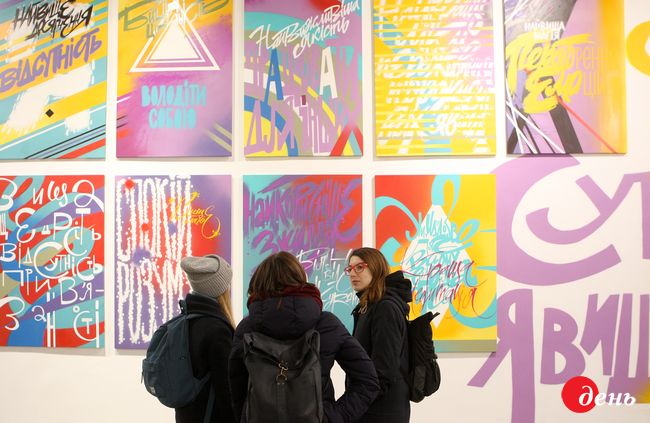 Horobiov emphasizes that nowadays Ukraine is undergoing a period of revisiting its identity, which is reflected in graphic art. “In my view, we had a group of artists who dealt with visual art in the 1980s, for instance, the Kharkiv School, but later it disappeared. You could not see people who would keep making books, posters, etc. They are replaced with people with technical background, but they lacked professionalism. Now, it seems to me, the first post-1980s generation is active, and it treats things seriously. There are more and more sophisticated artists, in particular, when it comes to identity design, signature styles, and logos. Earlier such things had to be ordered in Moscow or Europe. Nowadays both are expensive, and not really interesting. In Ukraine studios dealing with identic art have appeared. Working on a font, I personally experiment with various languages but I emphasize Ukrainian and I tried to choose for a post-modernist form. I want Ukraine to resemble my posters: contemporary, dynamic yet flexible and adaptive.”

A true Martian drama unfolds at the exhibition “LUUK.” The author of the eponymous project is Serhii Lykhovyd, who early in the 2000s left Luhansk for Odesa, where he still lives. “This is a version of the history of human exploration. Mars is a collective image. I tell about man’s eagerness to learn something new and losing what he already has,” Lykhovyd comments.

The project could conventionally be split in two. Corrugated steel sheets are painted with episodes from “the history of the exploration of Mars,” executed in hot enamel technique. The exquisite technique is in stark contrast with the rusting metal. Harvesting chamomile, flying the hot air balloon: this life seems familiar yet totally different. But is it really different, even if it is on another planet? 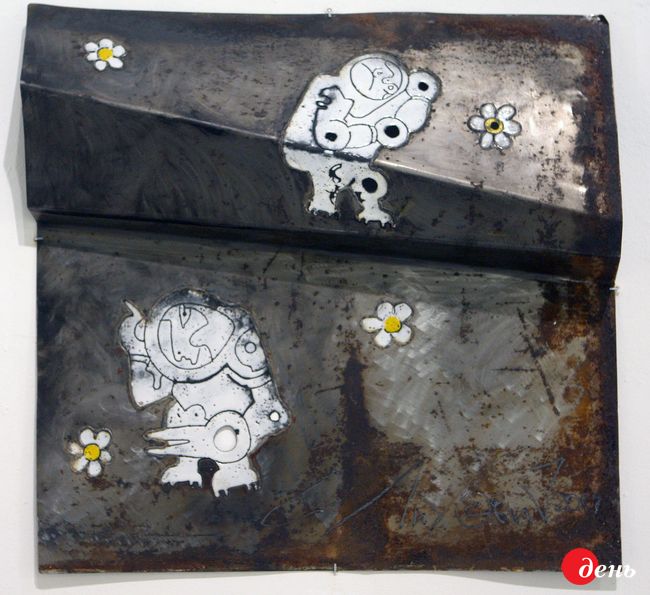 The next part of the project is a series of objects skull-shaped objects, also in the same technique. A white tiger, a unicorn, a Martian: they all look like archeological artifacts. The skulls of non-existing animals are a display of colors and cast fantastic shadows. But in the beginning they were just flat copper sheets. “I am attracted by volume, I want to break away from the two-dimensional world,” Lykhovyd says. “I also want to create something futuristic, a figment of imagination. Yet in any case at first you study what already exists. If it is a plant, you look at the water life or at macro-world. It is so huge you can contemplate it endlessly. A microscope reveals a totally different picture of the world, you see the geometry of design, the structure, the backbone of everything. I started with anatomical themes, with animal skeletons. Often I chose rare animals as my prototypes. Yet when you start implementing this, you realize that you are creating a different, non-existing animal.”

Oleksandr SHCHELUSHCHENKO, founder of the TSEKH Gallery, has jokingly dubbed the new project “Luhansk Winter.” “I have read an article about Zakentii, Yaroslav, and Serhii a long time ago, and decided to make their joint exhibit. They cannot implement such a project where they were born and shaped as artists. And here they are together. But this project is not associated with Donbas, its coal-mining landscape etc.,” Shchelushchenko says.

By the way, Lykhovyd admits there was no artistic environment to speak of in Luhansk, “before we started doing something.” “What was going on in Luhansk was a different drama,” he goes on to say. “There was only one exhibition room, where you could display your work only via the Association of Artists. Which means you need to make a series of exhibits which you do not need. Back then, I could not afford waiting five or seven years. We simply rented room and made our own exhibits with performance, although no one knew the word back then. For us it was like a rite or so. I see it as absolutely different periods: in Luhansk, in Odesa, and now.”

The works of Luhansk artist avoid coal mines, and they also lack references to war. Yet their themes – escape from Earth, exploration of new territories, life without rules – suggest thoughts about the developments in the east of Ukraine. And not only there. It may seem a platitude, yet life is a battle in which you could best rely on own principles and virtues.

The exhibit “LUUK” is open at the TSEKH Gallery through March 10.