It seems that the tradition of making an emphasis on the French art at the beginning of spring has emerged quite recently, but everyone takes it as something natural and regular. So, coincidental things rather than preplanned surprises in the program of the French Spring 2015 on the whole and in its components seem even more interesting.

The shows dedicated to the 100th anniversary of Suprematism founded by the great Kyivite Kazimir Malevich are still underway, and the motifs of the opening show “I am the dream” by Spectaculaires, which took place on April 4 at St. Sophia Square, on the week of Pesach, on the night before the Catholic Easter, and Orthodox Palm Sunday, seem to be part of this artistic anniversary. The circumstances of time are supplemented by numerous meanings of the selected place of action and actually the object for laser projection – the cathedral complex of St. Sophia of Kyiv, the sacred place of Ukrainians, and a monument of the world culture, which is protected by UNESCO. They say Ukraine will remain intact as long as St. Sophia stands.

The Sophia belfry which has had to keep silent for many years, because the music of its bells is dangerous for its thousand-old walls (only Mazepa Bell weighs three tons), this evening was speaking to the many-thousand crowd via a video kaleidoscope. The architecture reliefs outlined by the light created a geometric harmony of the church building. The symbolic signs, documentary pictures, and the color palette pronounced the determinative value of its content.

The dialogs of a child and a father, spirituals with the famous slogan of Martin Luther King “We want to be free,” numerous faces of people on the walls of the tenement, photos of the fighters for freedom Viacheslav Chornovil, Vasyl Stus, Nadia Savchenko. The picture by Eugene Delacroix Liberty Leading the People, and the magically uniting Astor Piazzolla’s tango – all this made up a ballad of the eternal dream of humankind – to live in peace and be free. The all-seeing eye, the dove of peace, the element of fire became the symbols, the keys that launched the mechanism of pure creation, which united everyone present in an artistic act which balances the creative power of man and God. In such a way the religious holidays and scarcely known Suprematism today proved their imperishability.

Above the square in the sky a small quadcopter was flying and probably shooting the event from bird’s eye view. Of course, we understand in what time we are living, therefore the association with a drone overwhelmed the masses.

The awkwardness and caution before the eye that is watching you surprisingly added confidence to the eternal gift of the bright faith in humanity. The all-seeing eye is usually an alarming symbol, but namely for Christians it is a symbol of hope rather than threat. For Christians living under God who knows all and sees all is more than a fear of sin, it is a gratifying understanding that God directs and protects them. 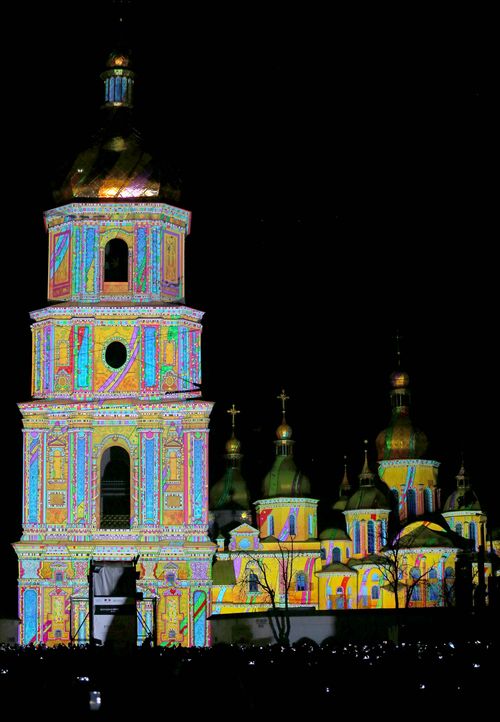 A bright refrain was the painting the buildings of the cathedral into red-black, yellow-blue, gold-blue colors following to the whim of childish fantasy. They were scattered with snow, soaring in a starry sky, and at some point of time became an aquarium, with the sun and the moon being caught on its bottom. In such a way the simple content of the show was filled with unending number of meanings and interpretations which depended on the taste and erudition of everyone in the audience. However, the conclusion from the show was unequivocal and clear: Ukraine’s dream of freedom is becoming and will be a reality.

The easy manner of presenting the meaningful ideas is a privilege of modern French literature, and it is so popular that Suziria Theater even held “Kyiv Avignon,” a 10-day show of plays by French playwrights.

This French theater summer would have adorned the French-Ukrainian project Antigone (premiere shows on April 28 and 29).

The stage director is Lucie Berelowitsch, choir parts performed by Dakh Daughters, and the music for the choir parts was, quite surprisingly, written by Vlad Troitsky who quit short-time directorship of the Children’s Music Theater because of the lack of music education. Another surprise is the cost of the ticket, UAH 150, like for the play To Live (April 10-14) by French director, who has been working with Kyiv creative youth for many years and even signs as Veniamin Guillaumenko.

And the fact that this year’s French spring didn’t include a well-known theater product was a sad surprise. Hopefully, the numerous actions under the slogan “Intellectual exchanges” in the domain of philosophy, literature, art, and psychoanalysis will produce bright impressions additionally to the delight received from the scenic art.