I’d long known about Ukraine’s first Anti-Terrorist Operation Museum in Dnipro before visiting it this year. It’s official title reads: “Museum [dedicated to] the Civil Feat of Dnipropetrovsk Oblast during ATO Events” and it is formally one of the Dmytro Yavornytsky National History Museum’s six branches. The exposition consists of the indoor diorama “Battle of Dnipro” and the outdoor display “Donbas Roads.” The diorama was opened on May 25, 2016, and the indoor exhibit on January 23, 2017.

The main exposition occupies 600 square meters of the diorama’s ground floor. Among the 2,000 items on display are documents, photos, war decorations, personal effects of ATO officers and men, weapons, and medical instruments. The multimedia room (movie theater) offers three panoramic documentaries (two in Ukrainian and one in English) about combat operations in the east of Ukraine.

The outdoor display shows a BMP-2 infantry fighting vehicle, T-64 tank turret, PM-43 regimental mortar, other weapons, an UAZ-452-truck-mounted ambulance, and a concrete mock-up of a roadblock. Practically all items on display are from battlefields. The central part of “Donbas Roads” is occupied by the sculptural composition “A Soldier and a Girl” and [a section of] a highway with road signs with the names of towns in Donetsk and Luhansk oblasts. Behind the armored infantry vehicle is a large metal structure portraying the debris of Donetsk Airport, a monument to the Ukrainian heroes who defended the airport for 242 days.

The diorama’s ground floor has a lobby, a video hall (former movie theater for lectures illustrated by documentaries), and the Hall of Memory (former exhibition hall with a wall with pictures of heroes who forced the Dnipro River during WW II). In the lobby, items on display are mounted on metal structures symbolizing the ruins of Donetsk Airport. The walls are covered by camouflage netting. There are large thematic stands that tell about servicemen, volunteers, medics, resettlers from the enemy-occupied territories, chaplains, and media people in the field. 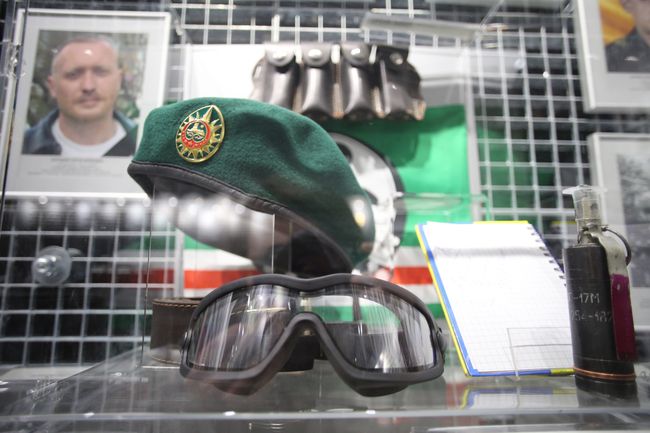 The Hall of Memory has over 500 photos of officers and men killed in action who were born and lived in Dnipropetrovsk oblast. There are glass cubes with personal effects of 50 KIAs, including war decorations, documents, books, parts of uniform and equipment, some showing where they were hit by bullets or shell fragments.

I was born and grew up in Dnipropetrovsk oblast, so I can’t help being emotional. The Battle of Dnipro Diorama is essentially and actually a sample of pompous clumsy Brezhnev propaganda (Leonid Brezhnev visited the place in the early 1980s, shortly before his death). The key element is a diorama portraying the forcing of the river near Dnipropetrovsk, executed in the true style of socialist realism, with a bulky foreground made of dummy blocks and trees. What attracted us kids at the time was, of course, the display of Soviet materiel ranging from an ancient howitzer to a jet fighter. We were thrilled to explore each item and no one knew – or cared to know – whether it had actually been used in combat.

The ATO Museum has breathed a new life into this mass of granite and steel. Vehicles riddled by bullets, road signs with familiar placenames, KIAs’ personal effects, a panoramic movie theater – all this well planned and multifaceted design makes one feel like reading a war novel or watching a war blockbuster, even taking part in a war scene, and certainly makes this museum one of the best in Ukraine. 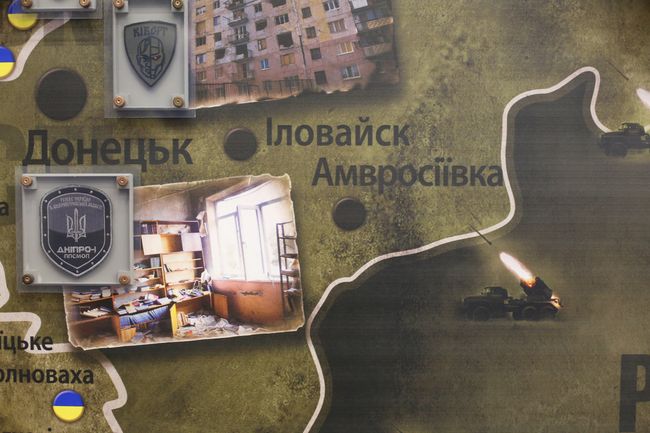 I spoke to a museum official and asked how the project began.

“Natalia Khazan, a volunteer of the Ukrainian Defense Foundation, was among the first to conceive the idea,” the man said. “There were also servicemen, volunteers, and medics who had fought in the first battles of 2014-15. Even then we had quite a few items on display and eyewitness accounts. Our region is the closest to the front. We started on the project in February 2016. First, it was an outdoor interactive exposition meant for children, so they’d know who was fighting, with what and why. We used the History Museum’s downtown junkyard and commissioned Kyiv artist Viktor Hukalo to make the design. The first exposition occupied 1,000 square meters. Just imagine: the project was conceived in February and was launched on May 26. Three months of hard and enthusiastic work! The idea was approved by authorities on all levels. The title ‘ATO Museum’ is a popular one, compared to the official ‘Civil Feat of Dnipropetrovsk Oblast during ATO Events.’”

What was the main concept?

“Honor the living and pay homage to the dead, from day one. We wanted people to see the courage and feats of arms performed by our officers and men. We walk down peaceful streets with a clear sky above, and we tend to forget that a war is being fought some 60 miles away.

“The history of this war is illustrated in several sections. We place no emphasis on one group of people compared to the next. Servicemen, temporary displaced persons, volunteers, chaplains, medics, journalists, the whole of Ukrainian society, all of Ukraine that’s resisting the enemy. The main thing is to show the truth about this war. We combine outdoor with indoor displays. The outdoor part has large items on display and introduces the visitor to the war theme. The main exposition has three sections, including an interior one with six thematic blocks, the Hall of Memory where we pay homage to the KIAs, and a movie theater.”

Which of these sections do you consider to be the most important one?

“They’re all important. Whereas the Hall of Memory leaves your nerves on end, the movie theater is the heart of the exposition. As many as 560 residents of Dnipropetrovsk oblast have been killed in action and the Hall is dedicated to them. It wasn’t planned as an exhibition room, but then relatives and comrades-in-arms of KIAs started bringing various items. This part of the museum is an especially vivid evidence of the scope of this war and the level of [Russia’s] aggression. Visitors step inside and see photos lining the wall from floor to ceiling, 50 show window cubes that tell the story in no uncertain words.

“The movie theater offers documentaries in Ukrainian and English, each lasting 30 minutes. They are made so no one leaves the audience unperturbed. They show all people – servicemen, medics, volunteers, chaplains, journalists – whose photos and stories are included in the exposition. The movie theater is modern equipped, with 10 projectors securing a panoramic 360o view. Kyiv is probably the only other place where such equipment is used. The technical aspect of the project was very complicated, considering that most video material originated from servicemen’s smartphones and had to be processed to be projected on the big screen, but we solved that problem.”

What about the documentary in English?

“Our museum is a mandatory part of the itinerary for all official delegations, including members of parliament, ministers, ambassadors, and presidents. This is proof that we did everything the right way.”

How many visitors so far?

“Our estimates show over 160,000 in 2016-17. The important thing is that admittance is free. There are very many young people among the visitors as the museum is part of the high school curriculum. There are interesting related patriotic projects like the one known as ‘The Roads of Heroes’ when groups of high school students come to Dnipro from various parts of the region and visit the military base of the 25th Brigade. There they are shown personnel’s daily routine, materiel, meet with war heroes. In the end, they visit the museum and walk down the Alley of Memory near the building of the regional state administration. They spend a day doing very informative sightseeing. Our museum is modern also because it operates on an interactive basis.”

Any items on display that have a special meaning for you?

“They all do as each has a special history. We receive them from the demarcation line. There are no dummies. Each item on display is genuine. I’ll repeat myself: the Hall of Memory is of the utmost importance to me. Everything there is permeated with human pain. How will I ever forget a postcard from the mother of a fallen soldier. She wrote she didn’t need any documents confirming receipt, that one had to realize that her son would never read her happy birthday postcard. Another woman brought her son’s combat fatigues and asked the clothes to be displayed so one could see the caliber of the enemy bullet that had killed him.

“There is a letter from a six-year-old girl whose father was killed in action in July. She was to enter Grade 1 on September 1. She addressed her letter to other children her age, saying your daddies will take you to school on September 1, but my dad died in the war.

“There are shell fragments and bullets we received from the Mechnikov Hospital. They are displayed along with excerpts from case histories. This is something we must remember.”

I noticed that ATO vehicles are displayed alongside dummies from the ex-Soviet exposition dedicated to WW II, and that the rest of the museum is inside the building with Brezhnev’s monumental diorama. An interesting combination, isn’t it?

“There is ideology and there is paying tribute to the fallen heroes. Another thing that makes our museum different from others is that it doesn’t impose any ideology on the visitor. The whole project is the result of a dedicated effort by hundreds of people. Some would come up with ideas, others would bring items to be put on display… There is no drawing any lines in such diversity and that’s why there is no officialism. Our museum is not a propaganda facility. We’re trying to be as unbiased as absolutely possible and we are grateful for every visit. We can see a new level of communication and mutual assistance. Our museum is one big symbol of Ukraine. There was the Battle of the Dnipro during WW II, there is a battle for the city of Dnipro going on. This is our cause. Ukraine will be there for as long as there is Dnipro.”