“Photography is the most unbiased instrument of history”

The meeting with Oleksandr KLYMENKO, photo correspondent at Holos Ukrainy and winner at the Den Photo Exhibit 2015, was one of the most emotional events at Den’s Summer School of Journalism 2016. It is a person to whom each photo is precious. The students saw this when they were watching the correspondent’s works that took part in Den’s photo exhibits. Oleksandr Klymenko astonished the audience with precise comments: he remembers the date and place of photographing, the names and further destiny of the pictured people, although some photos were taken in September 1991, some in the 2000s, and other in the past two years during the war in eastern Ukraine. Mr. Klymenko has photographed very many dramatic wartime stories. When talking to the photographer, the students also touched upon the problem of photo art ethics and the dangers a correspondent faces in the battle area. You can see all this in Mr. Klymenko’s answers to summer school student’s questions.

“WHAT REALLY MATTERS FOR A REPORTER IS HUMAN COMMUNICATION”

Olena KURENKOVA, applicant, Taras Shevchenko National University of Kyiv: “It was often said that you are making a chronicle of Ukraine with camera in hand. What do you think about the role of man in history? Who is he: an onlooker or a creator?”

Oleksandr KLYMENKO: “Most likely, an onlooker. Man is an eyewitness of the history that will be handed down to descendants. There is a saying: ‘An undocumented history is an inexistent history.’ Of course, in my opinion, photography is the most unbiased instrument of history. When you read about sufferings, it is one thing, but when you see a photograph, you perceive it altogether differently, as if pulling it through yourself. So, the photographer is a person of history who has a special duty to record it.”

Dmytro BAIDA, National University of Ostroh Academy: “You said in a Den interview that ‘reportage photography is rock, while staged photography is pop.’ Reportage suggests a certain movement. What signals you that you must release the shutter right now and embrace this very piece of visual space?”

O.K.: “When you make a spot report, you come to a certain place to see the event. All this goes on quickly, so you have to shoot all the time. There are other photographers who think they must walk around, think it over, and then take a snap of something. This must not be done. You don’t know if there will be another opportunity. In general, it is rock, for it implies a constant movement, life, and energy. Of course, people also photograph, say, fashion shows. It is also our job. I haven’t been photographing at the Verkhovna Rada for a long time – it’s not very interesting to me, for MPs are somewhat unreal characters. So, I like ‘field reportage.’

“Incidentally, human contact is indispensable for the reporter – especially in a dangerous situation, as it once happened to me in Ivory Coast during the civil war. I was left alone in the street. That’s all – I am an enemy because I am Ukrainian. They know there are Ukrainian-made helicopters that shoot. What did I have to do? I began to speak (without knowing French, the official language there) and treat people with cigarettes. There was a woman next to me, who was selling bananas and pineapples. I bought something from her. She saw that I was in a fix and also helped me – she said: ‘Leave him alone! He’s my customer. He’s a good man.’ Then our car came and took me, but I’d won this time thanks to personal contact.”

Oksana VOITKO, Ivan Franko National University of Lviv: “Have you ever had your pictures censored? Which of your photos make the strongest impression on you personally?”

O.K.: “I used to work very much with the military. I visited peacekeeping missions in the countries of former Yugoslavia and Africa. The military know and trust me to a certain extent. I’m trying not to shake their confidence. Secondly, suppose I’ve come to a position today. Yes, it is secret, but tomorrow the military will advance or retreat and this position will be of no importance. So, I must photograph in any case. Maybe, these photographs will be printed not today but a week or a month later. But it is history and it must be photographed. 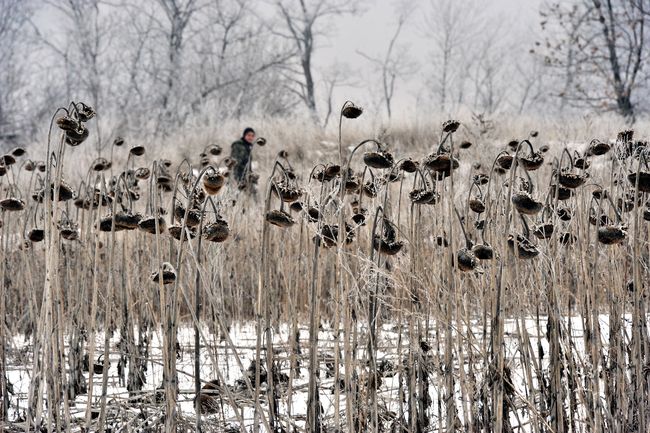 “As for the photographs… I can’t say which of them I remember the most. They are all precious to me. It is very difficult for a photographer to pick out his pictures because each of them has its own history. This history is perhaps not so pleasant, but it is very precious to me, and I wish to tell it.”

Maria CHADIUK, National University of Kyiv Mohyla Academy: “You’ve had several projects. Which of them was the most difficult for you?”

O.K.: “I think the current one is the most difficult, although I like photographing war. I want to publish a book about our war. I have already taken about 100-300 thousand shots, but I must select not more than 250 for the book. It is very difficult to choose, so I usually turn to editors and friends for help. The book is likely to come out in the fall. The only question is funding.”

Maryna BARBA, Illia Mechnikov Odesa National University: “You saw with your own eyes various conflicts in the world when you visited peacekeeping missions. To what extent differently do you feel when you push the button here, in eastern Ukraine, and abroad?”

O.K.: “I’ve spoken a lot about this, but I can still feel the pain. Someone else’s war means that you arrive and empathize with people in Africa or Yugoslavia. You take pity for them and even cry sometimes. You’ve been there for a week or two. Then you board a plane and come back to your peaceful country. This is the current attitude of Europeans to our war.

“Naturally, we worry more. However, the Ukrainians who haven’t seen a war don’t know [the current one] either, they do not empathize either. Only those who have lost somebody – a relative or a friend – can have a feeling. For example, five helicopter pilots, with whom I had once flown, died in May 2015. One of them, Serhii Rudenko, was a real ace! I had seen the others in Congo and Liberia. On one airfield, I was the first journalist to ever visit them.”

O.K.: “I can be scared but not doubtful. Only when you lie among landmines, you ask yourself: why have you come here? I can be afraid, for we are all human. I was told about a commander. When all this began, he lined up his subordinates and said: ‘This is a war. You may be killed and must be prepared for this. You are like all the other people. Each may get into something.’ I’ve also pondered on this and I think that if you are afraid, don’t go. But if you go, be prepared.”

O.V.: “The media often carry the horrible screenshots of bodies maimed in all kinds of murders, wars, etc. Take, for example, the photo of a Syrian boy, which triggered a worldwide debate. What ethical norms do you think a photo correspondent must observe? Is it necessary to show everything in its true colors?”

O.K.: “A photograph impresses if it is graphic. It is war. If you photograph war, there will be death, corpses, tanks, and guns. So, I am inclined to think that all this must be shown. Then it depends on each concrete case. I think there is a certain limit. One must perhaps draw the line at some things. But where is this line? For example, we photograph funerals. It is a terrible picture when mother or children cry at the funeral. But what is more horrible: a killed person lying in blood or a mother crying over a killed person? Everybody has their own deep-seated fears. For example, it is hard for me to see funeral pictures. A funeral is a culmination of sorts, the uppermost point of war. But this is perhaps what everybody can see.”

D.B.: “Oleksandr, you were awarded Golden Day last year and you said recently you were preparing a material for the next Den photo exhibit. What are you going to show?”

O.K.: “The war is having the strongest impact on our life. Nothing else can be more important. I will look for something more important when the war is over. Of course, people are sick and tired of it. I reflected the other day on terrorist acts in Europe: when they occur too frequently, they begin to bore you. Likewise, we have put up with our war, unfortunately. But still this must be shown.”

Maryna SNIZHYNSKA, National University of Kyiv Mohyla Academy: “Den turns twenty this year. What contribution do you think the newspaper is making to the development of Ukrainian culture and the coverage of events in the east?”

O.K.: “Newspaper journalism is not at its best in Ukraine now: circulations are small, while you can take some newspapers free of charge at a subway entrance, but their level is very low. I think Den is a high-brow newspaper. I will especially single out Den’s photo album and photo competition – unfortunately, the only one in Ukraine. In a word, Den maintains a high standard of culture.”

It will be recalled that Den’s Summer School of Journalism is held this year with support of the NATO Information and Documentation Center.