Fashion is... “slowing down” and “growing smarter”

How did the Ukrainian Fashion Week hold its spring-summer season of 2019, dedicated to “sustainable consumption”?

THE WHITE COLOR IN VARIOUS SHADES AND FACTURES WAS THE PREFERRED CHOICE IN THE BRAND’S SPRING-SUMMER COLLECTION OF 2019 / Photo by Mykola TYMCHENKO, The Day

A total of 72 designers, 50 shows, 9 presentations, 3 special projects, all in seven days demonstrating the super power of the Ukrainian fashion – these are just some of the numbers describing the Ukrainian Fashion Week SS19.

The headliners of the Ukrainian Fashion Week SS19 included designers and brands that have successfully represented Ukraine in the world fashion arena: POUSTOVIT, LAKE STUDIO, IENKI IENKI, RUSLAN BAGINSKIY, and KSENIA SCHNAIDER. Lilia Litkovska, too, has returned after a creative pause in our market. Since last year, she had been showing her new collections only in Paris. However, she held a presentation of her brand’s collection LL by Litkovskaya on August 31 within the framework of the Ukrainian Fashion Week.

The LL is Litkovska’s city brand, founded in 2013. Democratic and urban in appearance, it transmits the main values of the designer, but speaks in a simpler language. Over five years since it started operating, the brand had already been recognized in France, the US, Korea, Japan, Kuwait, and elsewhere, but had not been officially presented to the Ukrainian public until 2018. To fix this, Litkovska held a presentation of the LL summer collection in Kyiv. The show took place on the steps of the Toronto-Kyiv Business Center on August 31, 2018. Singer Alina Pash became the face of the LL by Litkovskaya label, having broken into this country’s musical scene this summer with her single Bitanga. 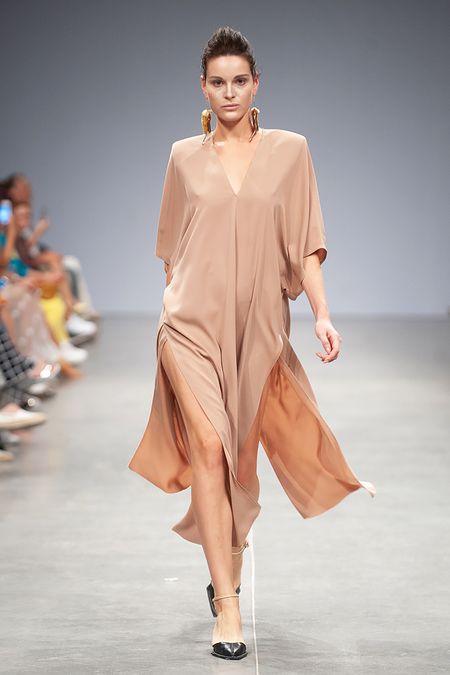 Another major figure of the Ukrainian fashion industry, Lilia Pustovit, had a debut of sorts as well. 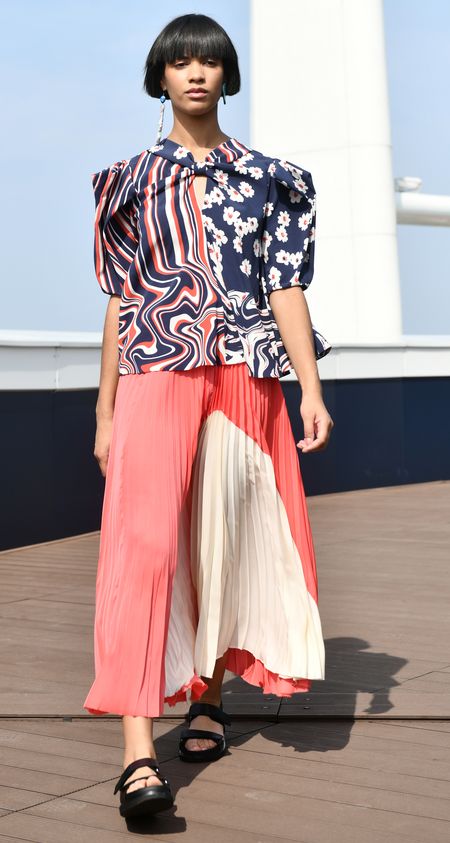 Ukrainian designer Pustovit devoted her new spring-summer collection to the freedom which started for her with the very choice of venue. Her brand, which traditionally holds presentations on the main Ukrainian Fashion Week podium, showed the new season collection on the roof of the Skyline apartment block, where clouds offered the best backdrop for gentle images of the POUSTOVIT brand. Models in snow-white attire (since the white color in various shades and factures was the preferred choice in the brand’s spring-summer collection of 2019) resembled free birds who know no borders. The designer herself compares this playing with whiteness to artworks of the impressionists, which always emanate feelings of understatement and lightness. 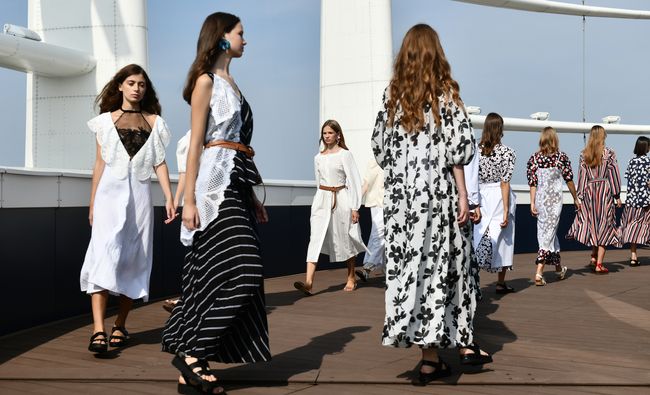 POUSTOVIT SHOWED THE NEW SEASON COLLECTION ON THE ROOF OF THE SKYLINE APARTMENT BLOCK / Photo by Mykola TYMCHENKO, The Day

“RESPONSIBILITY” IS THE KEYWORD OF THE SEASON 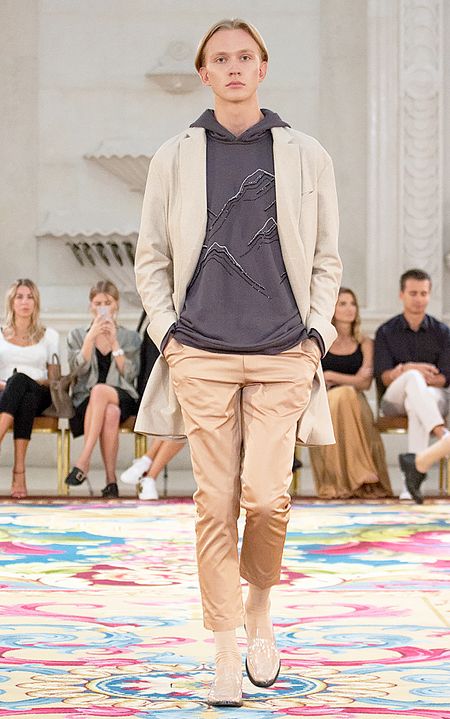 Yet another feature of the Ukrainian Fashion Week this season was the fact that the organizers dedicated it to the sustainable development, which is a “fashionable” theme all over the planet.

Accordingly, all events of the Ukrainian Fashion Week SS19 were aimed, as said by the organizers, at shaping a new fashion philosophy in Ukraine.

“We will talk about things which are important for fashion, about the need to consume clothes very consciously. And we think designer clothes offer an alternative to the so-called fast fashion, when you buy a very cheap T-shirt, and throw it out after five days because it has either lost its qualities or you are not interested anymore, and it is so cheap that you can afford to throw it out, etc.,” Danylevska told us. 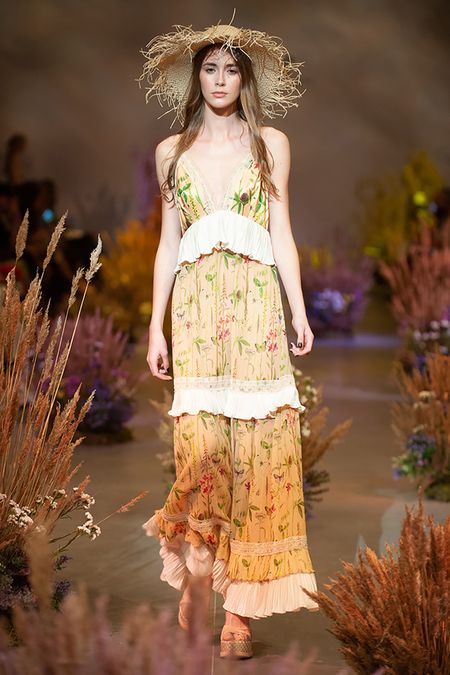 The sustainable fashion is also a thing within the so-called slow fashion concept. The slow fashion is when a dress, a bag, a pair of boots, or something else does not tell everyone what season you bought it in. This is when the fabric is high-quality and natural, when the leather is well-treated, or, if it is a synthetic material, or as it is now called, a material of the “new generation,” it must necessarily be ergonomic, that is, pleasing to the body and not obstructing the normal processes of our body’s life. If it is so, that item lives with you for more than just a season and is relevant for many occasions. 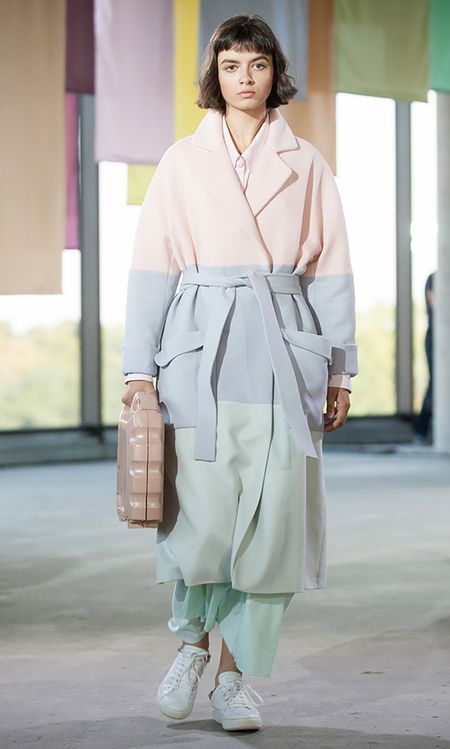 THE COAT BY KATYA SILCHENKO

The Ukrainian Fashion Week SS19 designers used different approaches to cope with the task. Some, such as the IRYNA DIL brand, took a literalist approach and showed a collection done in the “maximally natural” style which bordered on country. Sensual sarafans, suits, shorts, light summer coats and jackets, truncated overalls, flower motifs of bespoke prints, characteristic sophisticated embroidery, a variety of facture elements, as well as ruffles, flounces, draperies, fringes, openwork... Fabrics used included silk, chiffon, flax, batiste, viscose, tricot, as well as oilcloth and cotton sprayed with latex, as an embodiment of the spirit of the IT epoch. The dominant colors were shades of yellow, red, green, milky, beige, powdery, and pale light-green. The images were complemented by straw hats and baskets full of field flowers.

BRINGING FACTORIES AND CARPATHIAN POLONYNAS TOGETHER

Meanwhile, Artem Klimchuk, when tasked with creating a spring-summer collection for 2019, showed one featuring shades of the nude color and cuts which emphasized the silhouette. The designer says he was inspired by the Ukrainian 1971 musical film Chervona Ruta which starred Sofia Rotaru, Vasyl Zinkevych, and Nazarii Yaremchuk in the lead roles. On his dresses and shirts, Ukrainian meadows and mountains roam freely amidst blossoming gladioluses. There is more to it, though: shapes of factories are embroidered with gold thread on transparent and very feminine dresses and men’s shirts. Klimchuk, who was born in Kryvyi Rih, thus tried to literally “sew the country together.” The Ukrainian Carpathians in symbiosis with the industrialization of the 1970s make up the idea of his collection

DIGITALIZATION OF THE FASHION WORLD

This is a unique image creation service, which is another example of the use of artificial intelligence in the fashion industry. The service shows how new technologies change our lives and promote the conscious consumption movement, which helps us make mistake-free choices when shopping online.

Also, the Ukrainian Fashion Week continues to work with the British Council on the program of support and development for young designers of Ukraine, called the Fashion DNA-Ukraine. This year’s Fashion DNA-Ukraine program focuses on the special features of brand promotion in the digital space and emphasizes the financial aspects of e-commerce.

Within the framework of the Ukrainian Fashion Week’s new season, the Mystetskyi Arsenal will host the presentation of the project’s final creative part. Its mentor has been British digital art director Jon Emmony, whose portfolio includes working for Kanye West, the Victoria and Albert Museum, Nike, and other customers.