“The Gallery of National Pride”

Foreign air travelers get their first impressions of Ukraine at the airport. Also, those who fly out of the country, both our citizens and visitors, can make the last colorful addition to their “impression portfolio” there. From now on, the Gallery of National Unity will serve as the artistic “business card of the country” at the Boryspil Airport, after the solemn opening which was held in mid-November. According to the initiators of the project, who represent the airport and the Artania Art Foundation, passengers coming to Ukraine’s main airport will be able to see the best works of Ukrainian artists, photographers, sculptors, and patrons who have agreed to support the project.

The first exhibition of the newly established gallery includes original (!) works of famous Ukrainian artist, winner of the Shevchenko National Prize of Ukraine Maria Prymachenko. This is a very appropriate start, since for years already, Maria Prymachenko has been increasingly talked about; moreover, she is seen precisely as an ethnic artist, and now as an expression of national pride as well. But her talent goes beyond the “folk primitive” artistic style, with patterns and style features of her paintings used in the fashion industry; moreover, her works already have a “flying” history, made when the Finnish aircraft were liveried with drawings very similar to the Ukrainian artist’s works, and the whole world learned of Prymachenko (see more in Maria Prymachenko and Finnish Airplanes, The Day, June 4, 2013). As Ivan Drach joked at the gallery’s opening, “Kateryna Bilokur recently conquered the Kyiv Arsenal with her flowers, and Maria Prymachenko, not to be outdone, stormed the city’s airport.”

Even by itself, the Gallery of National Pride project is extremely ambitious. As noted by director of the Boryspil Airport Yevhen Dykhne, “We wanted to turn Boryspil into a truly Ukrainian airport, so that every passenger identified it as such. We wanted to mark the airport gallery as the gallery of Ukrainian pride, featuring these best examples of art created in this fertile land. Our aim was to fill the airport not only with commercial content for the benefit of passengers, but spiritual as well.” Meanwhile, founder of the Foundation for the Development of the National Art Museum of Ukraine, public figure and one of the initiators of the exhibition Petro Bahrii added: “We want people who depart from the Boryspil Airport to have Ukraine in their hearts as they travel around the world.” 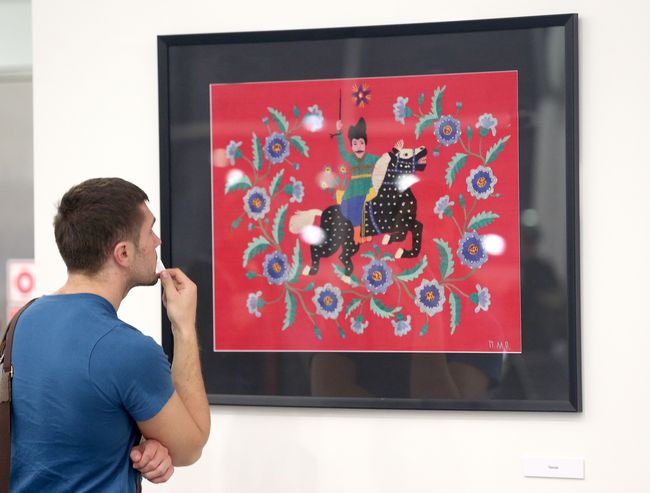 However, popularization of Ukrainian culture is only the top layer of the idea. Through rediscovering their heritage, Ukrainians, first, can once again establish for themselves the cultural identity of the country, which is important in understanding our place in history (it turns out that it is neither in the backyard nor on the margins). And secondly, by making folk art relevant in our time, we can have it once again “firmwared” in our identity as well as in the image of modern Ukraine. Finally, such projects are highly symbolic for foreigners, showing them that there is much more to Ukraine than “the Euromaidan and the war with Russia” on the one hand and “borscht-salo-nice girls” on the other. Would it not suit the government to take part in the development of such a big project, including at other airports? It seems to be a win-win idea – low-cost, but able to solve many problems simultaneously. It is a pity that the Ministry of Infrastructure did not see it, and their representatives did not come to the opening of the Gallery of National Pride... Some MPs came, though. As Mykola Kniazhytsky said, “The most important thing is that Ukraine sees a new kind of managers appearing, the people who think not only about some temporary things like money, but also about how their country, their city will look.”

So, these efforts rely on the initiative of individuals so far, even though we could benefit from international experience. “There was a movement for the art reasserting itself in industrial society in London in the mid-19th century,” art historian, Academician Oleksandr Fedoruk told the assembled public. “It was prompted by the understanding that only art could save the soul of England. England was educated through art. We now have this version of art culture offered here. The Gallery of National Pride is a great start, let it grow in wisdom and live long.”