The project was presented at the Lviv Palace of Arts, the exhibition featuring sculptures, paintings, and drawings by leading Lviv artists: Ivan Kryslach, Orest Skop, Borys Buriak, Petro Sypniak, Mykhailo Demtsiu, Dmytro Paruta, Viktor Moskaliuk, Volodymyr Skolozdra, Ihor Havryshkevych, Valerii Shalenko, Liubomyr Yaremchuk, Vasyl Yarych and others, and presenting Kryvorivnia, a Ukrainian village in the Carpathian Mountains, which had been a major center of cultural life in the past. Also on display are portraits and sculptures of famous Ukrainians, who once lived there or came to Kryvorivnia. It was there Mykhailo Kotsiubynsky wrote his famous Shadows of Forgotten Ancestors, and the famous movie by Serhii Parajanov was made half a century later.

Kryvorivnia became known primarily thanks to Ivan Franko, who had been visiting the place at the invitation of the famous Hutsul folklorist Volodymyr Hnatiuk. It pleased him so much that he chose Kryvorivnia as the place for holidays, and had been coming here with the family for almost every summer in 12 years. Thus, a little-known mountain village turned into the summer capital of Ukrainian culture, because many interesting people used to visit Franko. There, in Hrushivka hamlet, had been a pre-World War I villa of Mykhailo Hrushevsky, who later became the first president of Ukraine. The building itself has not been preserved (it burned down in 1914), but it has been rebuilt in our time as a museum. 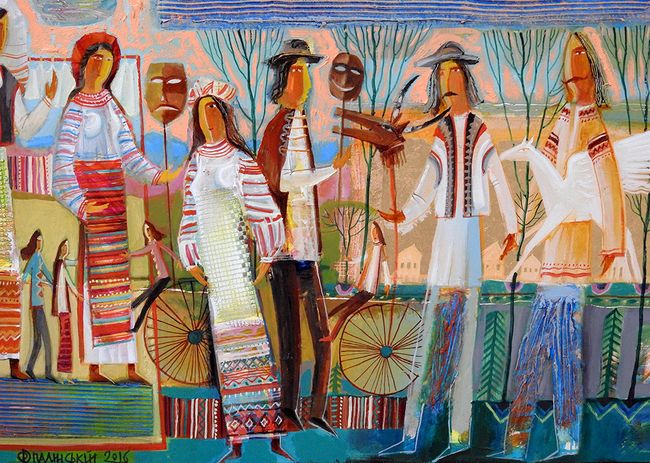 HUTSUL THEATER BY ROMAN OPALYNSKY / Photo replica by the author

The mountains near Kryvorivnia resemble the shape of rock amphitheater, and that’s why Volodymyr Hnatiuk used to call the place “the Ukrainian Athens.”

Kryvorivnia has a museum of Ivan Franko, the enclosed house, the house of Paraska Plytka-Horytsvit, artist and ethnographer, and many more wonderful places of interest and recreation; thus the project describes all the objects related to cultural heritage, their state and suggestion on how to improve it.

“The Poles have Wawel, Greeks – Athens, Egyptians – the pyramids; we, Ukrainians, need to have our cultural and spiritual Mecca, our Athens, and this is Kryvorivnia,” says Roman Opalynsky, Lviv-based artist.

Today those places of cultural interest, which should attract the pilgrimage of tourists, have fallen into dilapidated condition; there are no roads, the bridge is broken, and the tourists are lacking (transport companies refuse to create routes there). The Lviv artists have specific plans for the restoration of this unique place and for its conversion into a real Ukrainian spiritual center. They have declared the intention and turn to the state, to the sponsors, to the whole society for help.