A new column premiers in The Day today

High Graffiti will be dedicated to street art and graffiti in Kyiv and Ukraine and across the world. Recently street art has become an important genre in this country: the trend has finally found foothold in Ukraine. It is crucial to follow its development also because street art appears and exists in public space, in the visual environment of the city, and the appearance of its streets affects the life of the dwellers.

The definition “high graffiti” might seem questionable, yet it looks more or less apt, if only due to associations with terms like High Baroque or High Renaissance (the author even came across the phrase “High Avant-Garde,” referring to the art of the first third of the 20th century). Watchful observers will know that graffiti as such has long overflown the stereotyped notion of some obscure scribbles, hastily sprayed on any old fence; that is why paintings on walls are increasingly often referred to as nothing else but street art. And, like in any art, it has its summits. Technically, High Graffiti at present is not a term, but rather an indication of an ideal which, we hope, will be achieved by domestic street artists (in particular, with the help of our column).

The first author to be presented here is a Donbas-born self-taught painter Oleksandr Korban.

He became known in Kyiv a couple of weeks ago, when he finished a huge mural in Antonovycha Street (former Gorkogo): the figure of a boy playing with paper airplanes. The work demonstrates a striking, for an autodidact, mastery of composition, as well as unexpected abstractionist elements, adding extra dynamism to the realistic painting.

Korban was born on March 12, 1987, in Kirovsk, Donetsk oblast. In 2006-11 he was a miner at the Donbas Komsomolets Mine. He tried his hand as a street artist back in 2002, but his real career in graffiti starts in 2009. Later he took up portrait painting with spray on canvas, as well as interior and exterior design. In August 2014 Korban moved to Kyiv. He prefers portrait painting, usually executed in an accentuated realistic manner, with a perceptible influence of photo-realism and pop art. Korban has participated in a number of graffiti festivals: Newton Street Degustation (Kharkiv, 2010), Space Jam (Mykolaiv, 2011), Yalta Summer Jam (Yalta, 2011-13), and CeramoGraffitiFest (Opishnia, Poltava, 2013-14). Alongside with street art, occasionally he executes easel paintings for galleries.

On January 27 The Day already published a short article on Korban (From Mine to Art, by Maria Prokopenko). Actually, it was his experience in the mine that we started our conversation with.

What did work in the mine give you?

“Life experience. That’s where my young years passed. From age 17 to 19 I worked on the surface, and then more than 5 years underground.”

In January you said in your interview to The Day: “The mine is a strange, but a very kind world.” But why such an outburst of hatred in Donbas?

“Honestly, I do not know why this happened. In the mine the atmosphere is kind, and the people there are kind, too. Someone brainwashed and wound them up, and some gave in.”

Do you keep in touch with your friends there?

“Of course, I know people who stay there. We talk, even though we stick to our views on the situation. We just skip certain subjects, out of mutual respect. It is not worth while fighting with your friends.”

Do you remember your first drawing?

“I painted some letters, wrote my tag. My mom gave me money for lunch at school, but instead I bought two spray cans. I still remember how I first sprayed the paint. I sometimes recall those years, 2002-03, and those carefree drawings: you arrive, complete it in three hours, and leave happy. Now it is a full-blown process, titanic work. But even today, when I stand before a wall and spray the first line, I remember how it felt when I was 15. These emotions drive me when I draw.”

But back then your activity was not quite legal?

“Actually, it wasn’t. We boys went out to write at three in the morning, and when people were going to work at seven or eight, we were done and hiding. Gradually, our graffiti became better, and people grew to like them. They even held a graffiti festival in town. Then we were no longer afraid to go out in daytime. I remember how I once was stopped by a patrol in the evening. They asked my last name. Korban, said I. ‘Ah, so you are the painter? Okay, you may go then.’ So, I had no problem with law enforcers. Moreover, now I paint legally.”

Did it all go so smooth?

“Of course, it wasn’t. When something went wrong, I would freak out, give it up, work in the mine, and think I would never again resume painting. Yet sometimes you have to bite the bullet. When you have to choose between a hotdog and a brush, and you go for the brush. It must be that desire to prove to yourself that you can do it, which actually helps.” 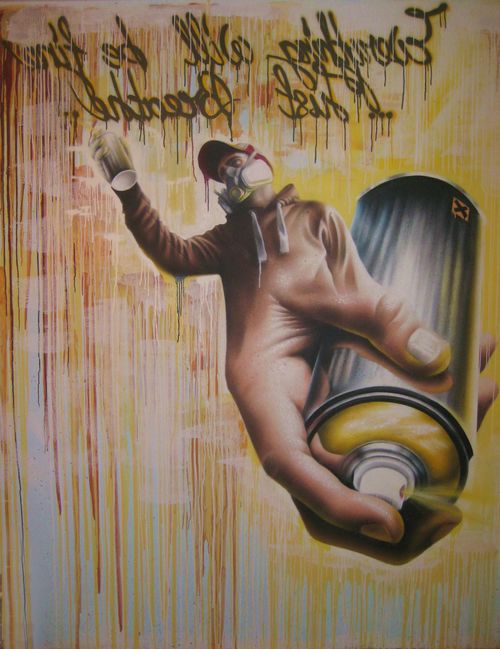 And how did you succeed in combining work in the mine and painting?

“Easily. People do have hobbies, beside their main work. Some take up sports and achieve high results. I did the same. The desire to paint was enormous, and I had to paint ever better, and I always strove to find the time for it, but I never thought that something would ever come of it. I never considered myself to be a painter or street artist.”

Who do you consider yourself to be, then?

“I’m just a guy who loves painting on walls.”

What appeals to you in such work?

“The way people respond. It is just incredible. That’s what makes life worth living: this moment when you stand painting, and hear people shouting ‘Great!’ It gives you wings.”

How would you assess the situation on the street art stage in Ukraine at present?

“There are Interesting Tales from Kyiv, the Donetsk crew Kind People, KU2 in Kharkiv, and also some strong guys from Lviv. You could name some 10 crews. But the situation is so-so. Firstly, this is a very costly hobby now. The prices for paint have soared. There is another problem: the suspicious attitude of city dwellers towards street art. I think it is caused by a couple of recent murals in Kyiv, which inspire, so to speak, mixed feelings.”

What did you personally learn over the past year, after moving to Kyiv?

“Patience. It helps. When something didn’t work out, I would freak out, go home, come back the next day and complete the graffiti. Now, if it isn’t working out, I step aside, do some constructive thinking, brace up, and go on working. Just work, keep doing things, and it will come to you. Look, I   have no special training, so I probably succeed due to constant practice and enormous desire. At least, that’s what people say. Personally I don’t think so.”

Well, the mural in Antonovycha Street is definitely a success.

“I am not to judge it (smiling). This is the first painting from a social project about a happy, so-called ‘right’ childhood, where kids are not glued to their laptops, gadgets, social networks, where they spend their free time in a useful and positive way. When I for an umpteenth time saw a little kid playing on a tablet, I remembered what our childhood was like, and decided to remind parents what kind of childhood they had, and paint children playing with paper planes, skipping ropes, playing hopscotch, or giggling on swings. The charitable Sky Art Foundation (facebook.com/sky.art.foundation) backed my idea and helped to implement it. The protagonist, a four-year-old boy named Lev, is the son of the people who offered me shelter when I came here from Donbas. When we meet, we play, have fun, in a word, we are friends.”

Where else are you going to paint?

“I hope there will be five more facades. The intended new murals will appear not downtown, but in the residential areas, such as Borshchahivka, Troieshchyna, and Darnytsia; we are considering Sviatoshyn at the moment. They are so sad, just like the suburbs of Donetsk, and they badly need positive art. Sometimes I hear arguments in favor of the center, because more people will see the drawings there. And what about people in the suburbs? They also want to have something pretty around. When I lived in Makiivka, there was an abandoned construction site right in the center. It was desolate, a meeting place for drug addicts. I made four paintings there, I wish I could have made it back to back, as I actually intended. People said to me, ‘Why are you doing it here? There is a good wall over there, more people will get to see it.’ But even now those paintings cheer people up. I love such moments not in pretty places, but in underground communities. This is a different atmosphere, where street art fits in perfectly.”

What are your other hobbies, besides painting?

“I play soccer. I used to play more, I also went to a sports school, but never grew to be a professional player. But soccer is under my skin. Sometimes I play with the guys here in Kyiv. But painting is my main hobby, which takes up all of my time.”