“Hanna-Oksana Lypa is an artist with a semantically rich thinking,” opined historian of art, professor, vice-rector of Lviv Academy of Arts Roman Yatsiv. “Her tendency to engage in archetypal modeling is the result of well-developed intuition, deliberate penetration into dense layers of cultural memory. The methodology she has developed absorbs not only an irrational search for form and image, but also a systematic logical and rational work. This creator can interpret the aesthetic nature of her works from the standpoint of spiritual practices. Symbolic elements that are included in certain structures of ceramics and painting are derived from science. Therefore, the morphology of her compositions is connected with the transcendental perception of place and time. The artist works with the concept of ritual, transforming it into a mechanic of aesthetic self-identification. Such complicated ‘procedures’ affect the spiritual and formative integrity of Lypa’s oeuvre, singling her out among those modern Ukrainian artists who represent a new quality of understanding ethnic traditions.”

The artist herself told The Day that the concept of the exhibition “Saсrum” had to do with “matter and spirit,” that eternal matter which infinitely replays itself in the new generations. “This exhibition is devoted to my bloodline and this land where I was born, to my family, which not only raised me, but also guarded our cultural values,” Lypa said. “Honore de Balzac said that extreme necessity is often a great spur to action. So, my exhibition is devoted to that spirit, the male element of sword which must protect us. In particular, it must protect our cultural values. For we will be respected by the world only when we are strong.” 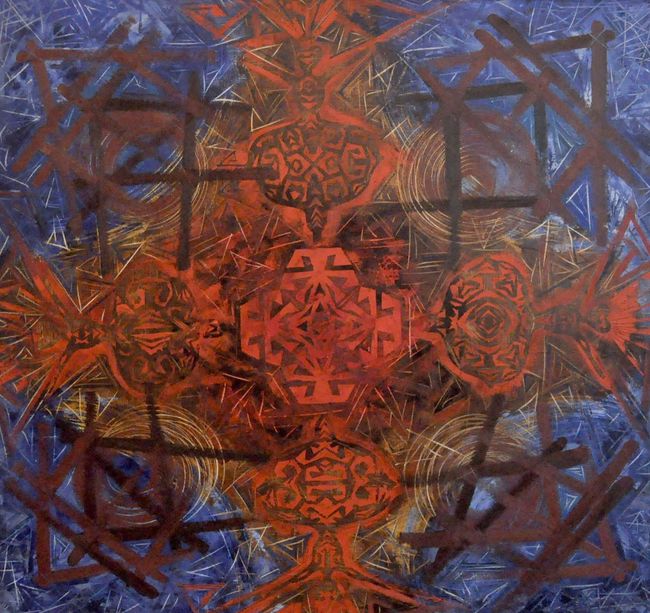 The artist said that it was important for her to show the return of the sacred space, the light in the souls, for people do evil precisely under conditions of godlessness! She also noted that she wanted to show the path of the artist which one had to endure in a land of distorted mirrors while keeping one’s soul pure. She also recalled Kobo Abe’s parable novel The Woman in the Dunes, because it was there that she discerned that in any mental wilderness, in any emotional trap of tragic loneliness in the absurd nonsense of life, one still could find life-giving moisture. “We live in a beautiful place called Ukraine. We must be able to tolerate others and at the same time to be self-sufficient and strong,” the artist said, and added she was creating a Cosmic Edifice through her artistic images, because our land has a sacred meaning – it is holy, bestowed on us by God as inheritance. And we must love and defend it at the same time.

The retrospective exposition will run until July 8.