Ten reasons to be proud

While there were certain grounds to claim in the early 2010s that “there’s no such thing as Ukrainian cinema,” now this kind of statements are a sign of ignorance

Twenty seven years is too short a time for the formation of full-fledged national cinema, all the more so that our film industry began to be funded on a systemic basis as recently as five years ago. But this turned out to be enough to make a sufficient number of films that deserve being shown to both national and foreign audiences.

The films I chose are very different in terms of genre and style, so I will name them in alphabetical order.

It is a very personal film about the director’s relatives who react in different ways to Russian aggression against Ukraine. Making the film, Manskyi visited Lviv, Odesa, Kyiv, Sevastopol, and Donetsk from the spring of 2014 to the fall of 2015. His mother, aunts, nephews, and cousins live in Ukraine. They have different professions, attitudes, and political persuasions. The author gives everybody a chance to speak and often appears in person on the screen (quite a risky step for a documentarian) but avoids making direct appraisals. His story is not about searching for the guilty but about the tragedy of his own family, where people have become totally alien due to the events in the past few years.

Documentary film director Oleksandr Techynskyi (b. 1979, Dnipropetrovsk) debuted in 2013 with a witty short, Sirs and Misters, shot in Uman during a Chasidic pilgrimage.

In 2014 Techynskyi coauthored, together with Oleksii SOLODUNOV and Dmytro STOIKOV, the full-length picture All Things Ablaze about the Revolution of Dignity, which won the MD-Filmpreis award for best Eastern European film in Leipzig. Techynskyi’s new film, Delta, which has already won an honorary mention at the DOK Leipzig Festival in Germany, premiered in Kyiv during the Docudays UA festival. The shooting was held at the town of Vylkove in the Danube delta. The characters live, work, and die in water. Techynskyi’s camera seems to hypnotize you, as it hovers over the river through the fog and watches Vylkove men doing their daily routine. The narration is simultaneously on three levels: bright and somewhat tough characters; a picturesque plastique of images – it is sometimes a true on-screen Brueghel; as well as metaphysical and religious motifs. The combination of visual perfection and meaningful content allows us to call Delta an outstanding event in Ukrainian cinema.

Above all, the film shows an excellent team of actors. Kudos to Plakhtii – Daria manages to express the heroine’s changing moods with just an eye’s motion, without a single extra word. On the whole, Stepanska unmistakably portrays contemporary urban heroes – vulnerable and unpredictable neurotics. Her Kyiv, a city of dark streets, solid highrises, morning buses, and eternal autumn, is skillfully and subtly photographed by the well-known Austrian cinematographer Sebastian THALER.

Serhii LOZNYTSIA, Ukraine-Netherlands, 2014, Grand Prix at the Astra film festival (Romania), a prize in Best Documentary Film nomination at the Jerusalem and London festivals and at the Nuremberg International Human Rights Festival 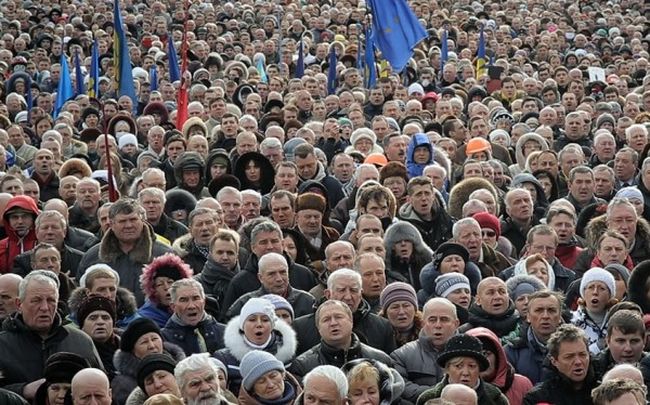 At first Loznytsia focuses on describing the situation for almost an hour. Long and medium shots are changing; almost nothing happens in the long up-to-five-minutes scenes shot with a stationary camera – people move all over the scene, doing their everyday chores. Passionate speeches, the calls of leaders remain on the fringe, with the focus being on this precious routine, into which you get immersed as if it were a meditation. We can see almost a Brownian motion, an element for which no shape has been invented so far.

What Loznytsia shows in the scenes of confrontation is a melting pot in which a nation is being born – not just an ethnos but a conscientious community, the political nation on which modern civilization rests. The director allows the plaintive song ‘A Duck Swims’ to sound twice, bringing down the verve of the scene and, instead, looking at people again – they are entirely different than at the beginning of the film.

Every nation has made a film about its birth. Loznytsia managed to take a giant step in this direction.

In this black comedy, infernal depth is combined with the masterly lightness of direction. Witnessing the accidental death of a twin brother, spectators confuse the living and the dead, oddballs and madmen. Confusion goes side by side with the comic madness that spreads, one way or another, to all the characters: the protagonist postwoman, an embarrassed district doctor, a literature teacher turned Mafioso, his kindhearted bodyguard, a romantic mental hospital patient, and sluggish policemen. Of special mention is the flawless play of actors Nataliia BUZKO, Serhii CHETVERTKOV, Jean DANIEL, Philip PANOV. Their characters are touching in their sham decisiveness and helplessness. They are naive and ‘second-class’ people incapable of real cruelty.

The executive producer of this documentary film was Steven SPIELBERG whose two grandfathers had emigrated from Ukraine. Bukovskyi managed to speak about indescribably horrible things in a refined visual film language. The film is based on the videoed evidence of those who survived the Holocaust. Volunteers of the Shoah foundation founded by Spielberg worked on the recordings. The eyewitnesses of World War Two events had to recall their childhood, when they were eight to ten. Spell Your Name still remains the worthiest, from the artistic angle, Ukrainian film about the Babyn Yar tragedy and other Holocaust-related events in Ukraine in 1941-42.

Myroslav SLABOSHPYTSKYI, Ukraine-Netherlands, 2014, three awards, including the Grand Prix, at the Cannes Film Festival’s International Critics’ Week section; European Film Award for European Discovery of the Year; over 40 international awards on the whole 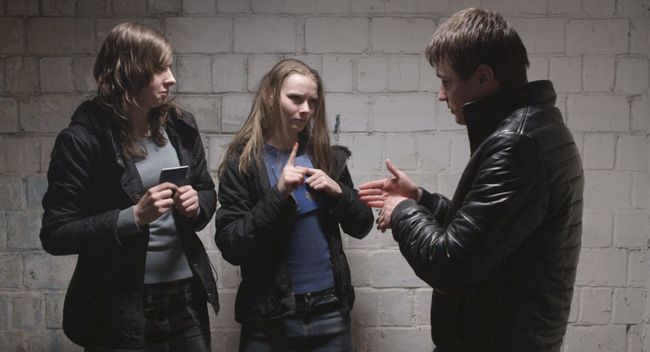 This criminal drama is the director’s full-length film debut. The protagonist is a youth who ends up in a boarding school for hearing-impaired teenagers and quickly finds a place in the inmates’ rigid criminal hierarchy. But, feeling affection for a girl classmate, he comes into a deadly conflict with the ‘tribe’ of wild adolescents. There are no dialogs or subtitles – the spectator finds himself in a world of gestures and shocking silent scenes. Instead of words, the author used the language of expressive choreography. As a result, this picture is sort of a plastic poem, a film-dance. Critics believe there are no analogues to The Tribe in modern-day world cinema. 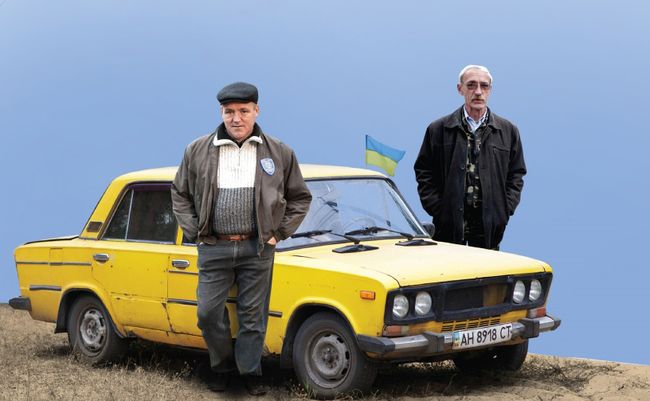 Viktor MARUNIAK, the mayor of Stara Zburiivka (a village in the Kherson region) and a history teacher by education, once told director Roman Bondarchuk about the unique experience of hiring sheriffs by the community to enforce law and order. This is how this story began.

The village elected sheriffs because the community support officer was responsible for a large territory and disregarded Stara Zburiivka. The sheriffs’ names were Viktor and Volodymyr. Quite different and even somewhat opposite by nature, they always behave confidently, playing the chosen role of ‘true men.’ In the line of duty, they drive a gorgeous camera-friendly canary-yellow Zhiguli. They and Mayor Maruniak have to deal with extremely quaint folks. This kaleidoscope of Zburiivka faces enchants you.

As a matter of fact, this film is not only and not so much about sheriffs as about this somewhat typical and somewhat unique village with all of its typical, as well as inimitable, problems. What we see is extraordinary naturalness of all the characters, and this makes events look convincing, which is worthy of the best fictional film.

This short black-and-white visual poem was shot at an elderly actors’ home and a mental hospital. This picture is a personal exploit of the director, for Strembitskyi, who was to make a graduation project, received only some fragments of an old film strip from the university’s cinema department. This was barely sufficient, so he shot almost all scenes on the first take. There are some very poignant scenes here (a blind actor reads out love poems, mental hospital patients smile joyfully at the camera), as well as light and warm scenes of fireside comfort, poetic images of springtime gardens, and soulful folk songs. Wayfarers is our first film to have won a Cannes award.

In conclusion, it remains to be added that this list can be much longer.