In the unity of opposites

This art project looks rather interesting from all viewpoints, including its idea and its authors. First of all, the exhibit arouses interest by the unexpected “intrusion” of ornamental textile works into the now customary “realm of ceramics.” Yet these works feel quite confidently in the TseHlyna Art Gallery. Textile art has merged with the art of clay so organically, almost in an “ecstasy of love,” that it raises a suspicion that it is not their last “date” in the gallery.

Undoubtedly, this consonance of textile and ceramics does not occur by pure chance. The Kyiv-based Natalka Borysenko and Olesia Dvorak-Halik, graduates of the Lviv National Academy of Arts (formerly, Lviv State Institute of Decorative and Applied Art), adhere to the main principles of the Lviv art school, such as a pronounced vector of ethnic and national identity, reconsideration of the heritage of national and international art, borrowing all that is best in avant-garde trends, and loyalty to national traditions. And, although the two talented and passionate female creators are self-sufficient and sovereign artists, each of which shows her original artistic style and her personal emotional interpretation of the world, they are, nevertheless, like-minded people who follow separate, but still very similar, formal and artistic paths.

The Lviv alma mater taught them (Borysenko in the 1970s at the ornamental textile department and Dvorak-Halik in the 1990s at the art pottery department) not to be afraid of experiments in plastic expression, which now allows the mistresses to boldly balance on the borderline between the concrete and the imaginary, the figurative and the abstract, both in textile and ceramic compositions. For this reason, the experimental emotional textile of Borysenko and the avant-gardist hot-tempered ceramics of Dvorak-Halik, which captivate their authors with inner artistic freedom, do not rival at the TseHlyna Art exhibit but exist finely side by side and enrich each other. 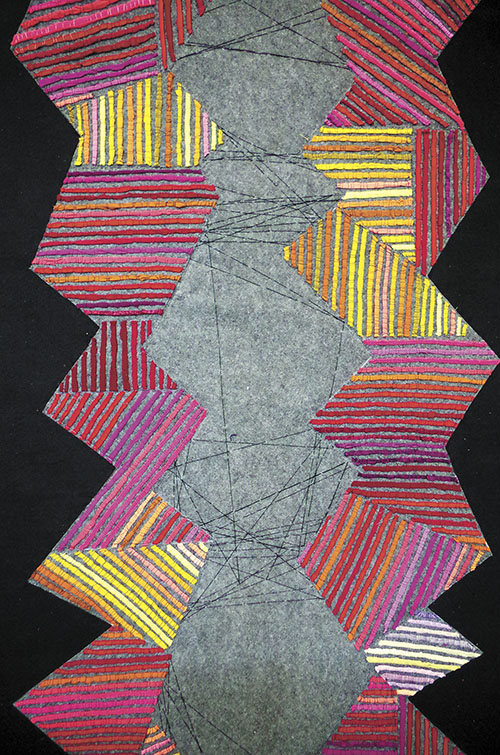 Texture is rather a broad and multiple-valued notion in art, to which the works of Borysenko and Dvorak-Halik also testify: most of them are abstract compositions charged with dynamic energy, rhythm, and motion, which attract you with the harmony of color combinations, while harmony and color, together with the characteristics of its brightness, are the main components of the notion of texture which the female artistic tandem assumed as a basis of their art project.

As is known, the texture of an image can be created artificially – in the shape of graphic symbols, fonts, line segments, and fragments of transformed geometric figures. For example, the large ceramic installation “Do Not Be Flat,” which catches your eye in the center of the exhibition, as well as the decorative compositions “Ceramic Mechanism,” “Closed Circle,” “A Tete-a-Tete Talk,” “A Box of Reels” (all made from the chamotte decorated with bright glaze, in the technique of modeling by hand), are built on the many variations of the circle and the oval with the expressive textures that arose in the artistic imagination of Dvorak-Halik who reproduced them in the exhibits.

Borysenko also dreams of multicolored geometric fantasies in her monumental textile pictures “A Road at Sunset,” “Green Composition,” “Pink Composition,” and “Specks,” which the artist skillfully executed in her own technique on the borderline of collage and embroidery.

The exhibit convinces us that texture is also an important component of images in nature which our mistresses found in the structural elements of tree leaves (Borysenko, triptych “Three Trees:” textile; collage, embroidery), exotic plants and flowers (Dvorak-Halik, decorative plastiques “Plants on Reefs,” “A Coral Flower,” “A Coral Cactus” – all of them from the “Mexico” series: chamotte, ceramic glaze, modeling).

The artist’s eye easily distinguishes the texture of clouds, water, and even the sun (Borysenko, decorative pictures “Between the Drops,” “Smooth Water Surface,” “Sunlight Spots.” All of them are cotton, painting, and hot batik), which cannot help surprising the ordinary spectator.

The word “texture” translates from Latin as “fabric,” “link,” or “structure.” These words are perhaps crucial for understanding the artistic idea that gripped Dvorak-Halik and Borysenko. But the main thing is that the exposition creates an atmosphere of harmony of the art of textile and ceramics, the two major varieties of Ukraine’s contemporary professional decorative art which is developing in the stream of the general European artistic process against the backdrop of a venerable attitude to the historical traditions of national figurative art.

By Zoia Chehusova is an Honored Art Worker of Ukraine
Issue:
№74, (2017)
Rubric:
Time Out