Marina NAPRUSHKINA: “The refugees are an opportunity for Europe to change for the better”

Moabit is a modest neighborhood in the western part of Berlin. The entrance to the “New Neighborhood/Moabit” public initiative is the place for posters on cultural entertainment: lectures, concerts, exhibitions, cinema shows (what a pleasant surprise to see a film by Ukrainian director Maryna Vroda!). The premises include two spacious, crowded halls. There are tables with many of refugees and Germans sitting together, socializing and learning languages. Maryna Naprushkina, co-founder of the “New Neighborhood,” accompanies me to a nearby room, in which another language class is about to start.

Naprushkina is an artist and social activist. She was born in 1981 in Belarus, and has been living in Germany since 2000. She has been making performance art, installations, and comics; she also created “Anti-Propaganda Office,” an organization for artistic debunking of ideological and propaganda myths.

In 2013, Naprushkina and her friends founded the “New Neighborhood/ Moabit” initiative, aimed at social adaptation of refugees in Germany. Last year she published a book about her experience with refugees entitled Neue Heimat? (“A New Home?”).

“IN THREE YEARS WE HAVE NOT EXPERIENCED A SINGLE QUARREL”

Marina, how did you start working with the refugees?

“I had long been interested in the possibility of a grass-roots initiative for people. And then the first hostel for refugees in our area opened.”

When did it happen?

“Three years ago. I then met the first refugee families. More than a hundred children were living in that hostel, and nobody had taken care of them. I initiated a talk with social workers, and they provided us with a small room. We furnished it by ourselves – we brought tables and chairs. We were engaged with the children: painting, organizing discos and sports competitions. Eventually, adults started coming with their problems as well. We started teaching German to them. The people were living in terrible conditions of that hostel, because a private company hired to take care of that was simply stealing the money. For example, the state provided funds for a kindergarten – and it was never opened. There were no washing machines. The people had nothing to eat, they lived in overcrowded rooms. As soon as we started pointing these things out, we were no longer welcome there.”

And what did you do?

“We made an arrangement with a cafe nearby that we would hold the classes there during the day. People were glad to leave the hostel, and the residents of the area became involved in the problem as well. As the neighbors began to help, we expanded. The last summer we no longer had enough room in the cafe, and we had to install some of the tables outdoors. Finally, we moved to the present premises – the bills are more expensive, but nevertheless there are no free seats in the nights. We are not asking for any state money – this is our principle in order to continue being independent.”

So, what helps the project exist?

“It exists through small donations. Someone brings 50 euros, some organizations donate in larger amounts. It is important that the atmosphere here is different. People in the hostel are much like herrings in a barrel; they often have ethnic and religious conflicts, a hierarchy is imposed on them. And we had not experienced a single quarrel here in three years. Perhaps this is because of the premises. The people renovated it by themselves, everyone was involved. Chechens, Russians, Syrians, Africans can now sit at the table all together, studying German – in a hostel that would be impossible.”

And what are you doing in the “New Neighborhood”?

“I should make a remark: we are not delivering help. It is important. We are learning from one another, we communicate on equal terms. I think that for Germans this initiative is even more important than for refugees, because it provides socialization. When your friends speak German, you also use the language. Also, we have a lot of students who moved to Berlin recently and have not yet found new friends; they come here to communicate with people. We have no ambitions to teach the language to the highest standards, we have no certified teachers. All of our teachers are German-speaking volunteers. Nowadays, critical attitudes against refugees are spreading like a wildfire, but we created a platform for dialog and interaction between refugees and citizens of Germany. Personal acquaintance clears away all prejudice. Many of my friends had spent much time actively debating on the radicalism of Syrians. They should get acquainted with at least one Syrian! They will have no more questions then. Fear arises from ignorance.”

So, the Germans are teaching their language and learning Arabic as well?

“Yes, we have two groups for Arabic language, 20 people each. Perhaps, a third one will open soon.”

It turns out that the main means of socialization are language courses?

“No, we have a lot of cultural events. And also the bar is an essential thing. After the training, people go there to relax and socialize. Refugees and locals alike consider this bar as ‘their own.’ People are going to the movies together, visiting each other’s homes, forming friendships. We have a really mixed audience.”

Who are the refugees? Can you describe?

“The geography is very broad. Three years ago, most of the refugees were coming from Russia – Dagestan, Chechnya; there were many Romani as well. In 2014 the first Syrians started coming. Now of course, the Syrians compose the bulk of the refugees. There are people from Afghanistan, Africa and Albania. Many of them are women with children.”

And of what social standing are they?

“Mostly middle class. The road to Europe is very expensive. The first to come were educated people, who owned a business or had a lucrative job. Of course, there are representatives of lower social strata, but not too many.”

How are they perceived by the German society?

“This is the number-one political topic, and it polarizes the society. Families, friends, and political parties are split over the issue. Of course, we have a positive experience. People come ready to help, learn, and communicate. On the other hand, we see racists and neo-Nazis organize demonstrations, we see how ethnic Germans from Russia oppose refugees. The perception is ambiguous.”

And which position is dominating?

The protests of Russian Germans are surprising – a while ago they too came here, they also had to start from scratch...

“Certainly. In addition to that, they are economic migrants. They have been living here for a long time and are still not able to understand the basic principles of a democratic society, one of which is the unconditional right to seek asylum. They want to change the constitution? What are they saying? It’s just pathetic. What a shame.”

Have you tried talking to them?

“I seldom do that. People who come to us have a different opinion. I doubt that anyone can be convinced by words, there should be a personal contact.”

“NO REFUGEE COMES HERE OUT OF THEIR FREE WILL”

What personal stories you remember the most from the people you are working with?

“Oh... There are so many... so many dark things. No refugee comes here out of their free will. The stories are horrible. Someone is the only survivor in the family after a massacre by Taliban. Others could have died from diseases incurable in those conditions. In Russia, Chechen people are dying from tuberculosis. Which century is this disease from? Women with children come here – mothers are dying, children are infected. Syrians have terrible stories to share as well. When you come here, part of your family still remains there. The refugees fear for their families every day, but can do nothing to bring them here – such opportunities are very limited, and the road via the sea is dangerous. It is hard to imagine, how do they manage to live with these problems?” 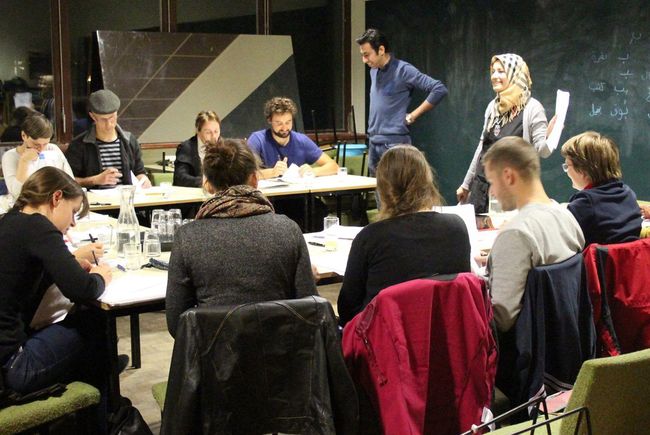 IN 2013, MARINA NAPRUSHKINA AND HER FRIENDS FOUNDED THE “NEW NEIGHBORHOOD/MOABIT” INITIATIVE IN ORDER TO ASSIST THE SOCIAL ADAPTATION OF REFUGEES IN GERMANY

As far as I know, you are a feminist, and you have to work with people of a completely traditional education. Were there any conflicts on this ground?

“No, because above all these women are very strong. You have to understand that people do not choose their upbringing by themselves. Women cannot influence this – they indeed were educated that way. But here’s an example: in Chechnya, women are locked at homes to bear and raise children, but here Chechen men are driving baby carriages on the streets. This is a big shift, whereas in their homeland – the guys told me themselves – they would never do this, because they would get laughed at. They change here. It’s only a matter of time. Of course, it is difficult for men raised with a sense of duty to feed the family – here they are not able to find work, they don’t know the language. Learning German when you are 40 or 50 is a daunting task, and if you had spent your entire life hiding in the forests and fighting, it is doubly so. The men avoid the evening lessons in German – women come, but men remain at home; they want to come but are afraid of failure. We have one man who entered his studies a full year after his wife had started. It takes time, and you cannot pressure them with this problem.”

But nevertheless, where is the boundary between freedom and tolerance to others’ traditions?

“When someone in the family is beating someone else, then that’s another story. There are no universal rules; each situation should be dealt with individually. We have to gain patience.”

“FOR ME, IT IS AN ARTISTIC EXPERIENCE AS WELL”

As far as I know, you wrote a book about refugees. Tell me a little about it.

“Actually, I am used to working with images. I’m an artist, and as I started working with the refugees, a parallel world opened to me. Texts have helped me to live with it. I wrote about our initiative, about the daily situations, about the support to refugees, about the confrontation with the bureaucracy. The book tells what happens to the refugees here. And the question is more related not to refugees themselves, but to the German society. Discrimination, failures at integration, and the latent xenophobia of Germans in many organizations – these are the topics of the book.”

And how was your book received?

“It’s fine. The people read it. Someone has acknowledged that the book helped them to start doing something on their own. Now many people engage in initiatives, and it is cool. It is impossible to write a manual, but there are common things we had worked out, and I hope this book would be useful to someone.”

Do you have time for art after your social work?

“Well, I’m an artist, but I don’t do classical painting. So, consider this my own big workshop (laughs). For me, to some extent, it is an artistic experience as well.”

What are the refugees in Europe’s perception?

“They are an opportunity for Europe to change for the better. The more nationalities are living in the country – the richer its culture and economy become. Germany is aging. Manpower is needed – we need young people, we need children. So this is a chance.”

Is the world without refugees possible?

“The first step is to overcome the disorders that force people to leave their home countries. This is another level of discussion. But we may not sit here and say that those issues are no concern of ours.”