Princely Zvenyhorod to be revived

THAT’S HOW THE ZVENYHOROD PARK IS GOING TO LOOK LIKE

Ukraine’s first historical-cultural park “Ancient Zvenyhorod” will be launched in autumn not far from Lviv, based on a nationwide archeological site. It will cover an area of approximately 38 hectares. The project is a brainchild of the Department of Architecture and Urban Development at Lviv Oblast State Administration. The project won in the competition of the regional development initiatives. Approximately 12 million hryvnias will be allotted for its implementation within the EU sector budget support program. The project envisages the regularization of the site and the central square of the village, conservation of the sites of the principality time with the aim to preserve them for future research, marking the most significant buildings of the principality time with the help of modern artistic and technical means, laying out the roads of the ancient settlement with the purpose of outlining the late medieval and early medieval fortifications, the visual reconstruction of the unique defense system of the 18th century, creating the basic touristic infrastructure around the historical-cultural park “Ancient Zvenyhorod,” tourist routes, etc.

Zvenyhorod was one of three capitals of the principality, where the Ukrainian statehood emerged in 11th and 12th centuries in the Transcarpathian region. According to archeologists, the research of Zvenyhorod started back in the mid-19th century and is still underway. The largest excavations took place in the 1950s-1990s. The impressive collection of the archeological artifacts that counts for tens thousands of findings, shows Zvenyhorod as a big economic, cultural, and spiritual center.

The co-author of the project, a Zvenyhorod researcher, junior researcher at the Archeological Rescuing Service Nataliia VOITSESHCHUK commented to The Day: “The question of launching a preserve in Zvenyhorod was raised after the collapse of the Soviet Union. But while the documents were drafted in 1995 Ihor Svieshnikov, who was the mastermind and the moving force of the process, died. In the 1990s the preserves in Halych and Belz were launched, however a different fate awaited Zvenyhorod. But I think history doesn’t like unfinished cycles, and now the time has come for me and our team with the support of concerned citizens to create this touristic-cultural and educational center. We have already applied the documents and are waiting for the decision. Last year, not to waste our time, we filed a project application for the grant program for the adaptation of the sites of cultural heritage for tourist activity. And we decided to create a preserve. But the question is not about just launching a preserve, but continuing to develop it. Because we already have the preserves that remain only as the names on the administrative map. We have no preserve yet, but we have the opportunity to bring the territory in order, so we have decided to launch a park. This will be a recreational area with tourism as its main activity. The park will conserve and preserve the site with minimum intrusion into its historical landscape, we are not planning any construction, we will only renew the external borders of the fortifications that have been preserved. While walking in the park, the person will learn the interesting facts from the history of the Zvenyhorod Principality, and partially it will be done through the game, because the project is meant not only for adults, but for children as well. We want to create a competitive tourist project in the Ukrainian market to fulfill the main task, preserving the site for the future generations,” Voitseshchuk says. 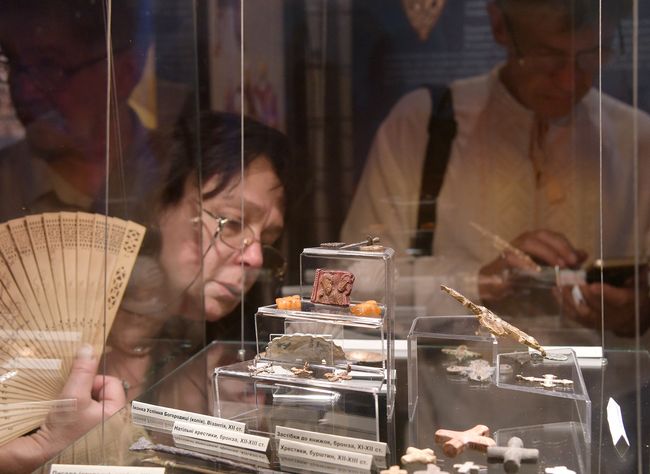 “We’ve made a film about the history of Zvenyhorod, from ancient time till today. We’ve also launched an exhibit at the Zvenyhorod Museum to make people learn about our town of the principality time, it’s called ‘Ancient Zvenyhorod – coming back from oblivion’ and showcases over 300 items from the 11th-12th centuries. It will be open till December 1. There are very few archeological exhibits, as this is a very specific sphere of museum activity, because it’s not easy to display the archeological items, moreover to add some informational background. We display the most interesting items from historical viewpoint, which were found in Zvenyhorod in the period between the 19th century and 2010, when the last excavations took place. Most of the items were found during the significant studies, which lasted in the period between 1971 and 1986, the boyar quarter which was excavated to more than a half. Unique remains of a wooden building, which had been well preserved due to the qualities of the peat soil as a conserver of organic materials, were found there,” Nataliia specifies.

Certainly, the touristic potential and prospect of famous Zvenyhorod are huge, but, most importantly, the scholars must start regularizing and framing it on a serious level. Voitseshchuk states: “Unfortunately, we have no favorable conditions to implement cultural and historical projects. Culture is the last thing to be cared about. We must change the approach, there must be an exploration with the vision of ourselves and understanding why we are doing this. And there should be the understanding that either you make a high-quality product and compete or you cease to exist. Actually, there must be a professional academic management.”