The drama Touch Me Not (Nu Ma Atinge-Ma, Romania – Germany – Czech Republic – Bulgaria – France, 2018) became a real sensation of the last Berlinale, winning there both the Golden Bear for the best feature film and the award for the best debut.

This work, done as a peculiar combination of live-action and documentary cinema, tells the story of three heroes – Laura, Tudor, and Christian. The first two are played by well-known actors Laura Benson (Dangerous Liaisons (1988), Ready to Wear (1994)) and Tomas Lemarquis (3 Days to Kill (2014), X Men: Apocalypse (2016), Blade Runner 2049 (2017)). Like many supporting characters, they share the same problem as they strive and at the same time acutely fear intimacy, corporeal and emotional alike. Christian practically plays himself: crippled by spinal muscular atrophy, he is completely free from prejudice and lives with the girl he loves. The film itself is a kind of story about liberation, about overcoming of protective mechanisms and taboos, sometimes in quite unusual ways.

In the non-competitive program of the Molodist Festival, which ended in Kyiv on June 3, Touch Me Not was personally presented by the film’s director Adina Pintilie and the leading actress Laura Benson.

Adina-Elena Pintilie was born in Bucharest on January 12, 1980. She debuted in 2003 as a documentary filmmaker. Her non-live-action works participated in the competition programs of the festivals in Locarno, Rotterdam, Leipzig, and Warsaw. Pintilie serves as artistic director and curator of the International Experimental Film Festival in Bucharest. Touch Me Not is her first live-action film.

After the Kyiv premiere, Pintilie answered questions of The Day’s correspondent.

How did it occur to you to make Touch Me Not?

“When I was twenty, I thought I knew everything about how relationship should function, intimacy, our desire mechanism, and also what means beauty. But in the past years of life, I realized that actually I don’t know anything. Once clear ideas get destabilized when I enter in contact with real people and with real life. So, we set out on this journey to just question our own preconceived ideas about how intimacy functions, and to discover how people actually can access intimacy in the most unexpected ways. And back in 2013, we started an extensive casting process, which was more like in documentaries, but this film is not a documentary. We try to avoid all these labels, because the film is mainly a research one, it is a process film, a research film.

“So, in 2013 we started this extending casting period. It was not like looking for actors, it was more like looking for like-minded people. And after finding them, we worked with video diaries, with a lot of filmed exercises – it was before the official shooting, where we could get accustomed with the camera being, like, a witness of some of our very personal, intimate stories. So, this kind of a long process helped to grow the trust between the participants in the project.”

“It was like fiction functioning like more a sort of laboratory, like a safe place which allowed us to explore really sensitive areas. Because when you are protecting yourself under, let’s say, fictional character, in that convention you can go everywhere, because you don’t need to know what is real, what is invented, what is imagined, what is memory. Many of them came as themselves in the film. So, they were not playing with this mixture of fictional and real elements, they brought their own.”

Did you have the help of professional psychologists?

“Yes. For example, the emotional anatomy workshop: it’s designed by this very distinguished German performance artist and therapist Julia Sparmann. I found this very inspiring. So I proposed to collaborate and to create a workshop for the film, and within this structure, reenactment of the real workshop, we cast real people that wanted to work with this intimacy area in front of the camera, to share their experiences. And they were already entering this, I would call it, conventional laboratory. And everything that happens in this created structure, or a lot of what is happening there, it’s really authentic encounters between people. So, this is a very good example of how the mixture between staging and reality functions.” 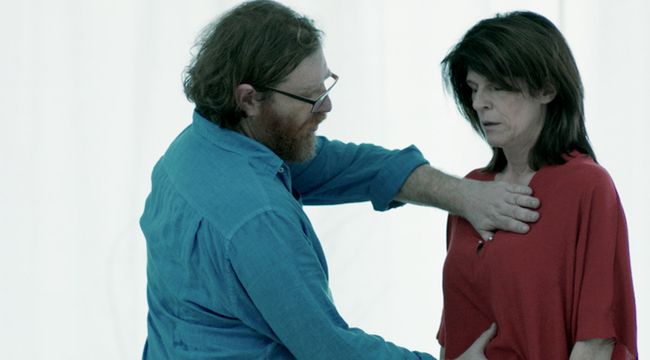 Can your directorial approach be called anthropological?

“I would not call it, because anthropologizing claims sort of objectivity. But this film is a very subjective emotional exploration that each of us went through. And by being highly subjective, I don’t think you can call it a scientific approach. I mean, in the end, if you look at psychotherapy, it is both sort of science, but it also involves high doses of subjectivity, intuition, and non-rational thinking, because they work a lot with the unconscious mind, with early memories, with a lot of emotions. So, that’s why I’m hesitating to put it in the area of science, but I would put it in the area of research. Research about human nature, in that sense it is connected to anthropology.”

One of the protagonists is played by an actor with a disability. What was special about working with such an actor?

“For me it was very important in the casting process. And when trying to find these people, it was very important to feel that they have a strong motivation, emotional motivation to be part of the project. And Christian, it’s a very particular example of this, because he wanted to communicate with the audience. And actually, I think this film functioned like sort of a dialog, like many of the characters have their own, very specific views of the world, very progressive, and they would like to share it with the audience. And Christian said it from the beginning: ‘I’m not afraid that this film is going to be attacked for me, for doing it. Because you know, the people who are going to attack the film are people who just actually have no idea about disability and about the relationship between disability and intimacy. They think that we, people who have different label on body, we just need to be taken care of, we are asexual, we don’t have any intimate life.’ And for him it was very important to enter into this communication with the audience and to share with them that people with the different label on bodies have the same desire, the same needs, and the same right to exist as sexual beings as any other person. He is also an activist for the rights of people with disabilities. And it was really an inspiring experience for all of us in the film to have Christian and Grit. They are a real couple, they are really passionate explorers of intimacy. Earlier only Christian was able to verbalize, to speak about this, but now Grit started to explain, and her voice is growing in this whole thing.”

Do you see a difference between documentary and live-action cinema?

“The border between the two is actually so fluid, because in the end, it’s about cinema, which is a very subjective experience of reality. It’s an illusion that you can capture the reality in a sort of an objective way. You cannot do something like that from the moment you choose to put the camera and to make a frame, and everything becomes a matter of subjective perception. I had the privilege to witness a master class that Werner Herzog [a German screenwriter, film director, author, actor, and opera director. – Author] gave some years ago in Salonica, and he was criticizing, debating with this view of documentary as being sort of fly-on-the-wall approach, where you don’t interfere, you don’t alter reality. And he was saying, ‘I don’t want to be a fly on the wall, I want to be the bee that stings.’ Because you can’t have access to the truth of the human being by just putting the camera and watching that thing, that is happening in front of you. I have to be able to create situation, to provoke, to create the environment that can bring that truth to the surface. So, the reality is not what it is, it’s transformed by the subjective perception. And in that sense, I really don’t think there’s a distinction.”

Now, when there are many different kinds of technologies that let one change one’s body, what do you think, how has the attitude to corporeality changed?

“I basically can talk about my very subjective experience. I notice that in the past years at least, there is a strong interest for these self-exploration activities, like for workshops in different areas. And I think this happens everywhere in the world. Everywhere I traveled, there is growing interest in this process of getting to know your own body, and to be friends and accepting your body as it is. But luckily, more and more people start to look at that as something very normal, as something which is naturally part of your life and is worth exploring, because it helps you. If you know yourself better, you can solve also the other stuff. Actually, psychoanalysts have for a hundred years talked about how intimacy and sexuality are such natural parts of your life and your development. This all is so natural in psychotherapy, but for many other areas of discussion in our life, this is a difficult topic to approach. Psychoanalyst Michael Bader was explaining that your sexual behavior and your sexual fantasy can be key to read aspects of yourself also in other domains. So, you can judge yourself and say, ‘I’m wrong, I’m sick, I have to go to hospital to repair myself’ – or you can look with honesty at yourself and you say, ‘OK, I am like this, let’s try to understand what’s behind this behavior, why I am actually doing that.” There are ways of experiencing intimacy different from the norm, if you try to understand them and not put a label that they are wrong, first of all, you will have a better understanding of yourself, and then you will have a different relationship with the other person in front of you. So, you will not so easy become an extremist, or judgmental, or right-wing, the degree of aggressiveness has high chances to decrease. That’s why a film like this is important, because it’s offering a sort of mirror about how people can be different than what you think they are, how you think they should be.”

In conclusion, a question asked from our Ukrainian perspective this time. It can be said that we here in Ukraine envy you, Romanian filmmakers, greatly, because you have just suddenly, after a prolonged period of communism and troubles, created an incredibly flourishing cinematic school. How have you managed to do it?

“I don’t know. “I don’t know. I mean, the Romanian cinematic community was all the time clashing with political system, with the state system. So, you have this situation which is not so nice and cozy, it’s not so comfortable, so then you need to put extra energy to make things happen. Maybe this is energy which comes from having an enemy, having an antagonist. There are a lot of talented people, but not all of them functioning.”