With the help of the world

The Kyiv-based M17 Contemporary Art Center started February with the opening ceremony of the photo exhibition “Past. Present. Future. Rebuilding Life after Displacement.” The photos, arranged in sets, tell about seven projects which are being implemented by the Initiatives of the Infrastructure Program for Ukraine (IIPU) in the Kharkiv, Dnipropetrovsk, and Zaporizhia regions. On behalf of the German Federal Government, this program is being implemented in Ukraine by the Deutsche Gesellschaft fuer Internationale Zusammenarbeit (GIZ) GmbH.

“One can publish texts, statistics, figures to no end, but photos are perceived quite differently,” asserted director of the IIPU Uwe Stumpf. “By creating an exhibition, we wanted to show the people we encounter, the work we do daily and its results. Thanks to these images, we can feel how close to us is the war, its routine reality, and its consequences.”

Sabine Mueller, who serves as regional director of the GIZ in Ukraine and Belarus, told us that the German government had a long history of cooperation with and assistance to Ukrainians. Over three years of implementing projects in eastern Ukraine, the Germans have learned a lot about the experiences of internally displaced persons (IDPs). Now the GIZ wants to tell audiences that it usually does not address about people whom it has helped. “We will not only tell these stories here, but also show the exhibition in Germany to those who are far removed from Ukraine. Hopefully, thanks to these great photos, they will come to know more about Ukraine and what is happening here,” Mueller noted.

“I photographed the revolution during the Euromaidan, worked in the warzone, so I found it interesting to look at the continuation of this story from another angle – that of IDPs rebuilding their lives elsewhere and integrating into a new community,” shared his thoughts the author of the photos, documentary photographer Maksym Dondiuk. According to him, he shot the material for the project very quickly – in two weeks, so he spent no more than two days in each location. It was not easy to find a common language with the subjects of the photos in such a short time. Dealing with night rides and bad roads between communities proved to be even harder. However, the plan succeeded, and the exhibition turned out to be diverse and informative. 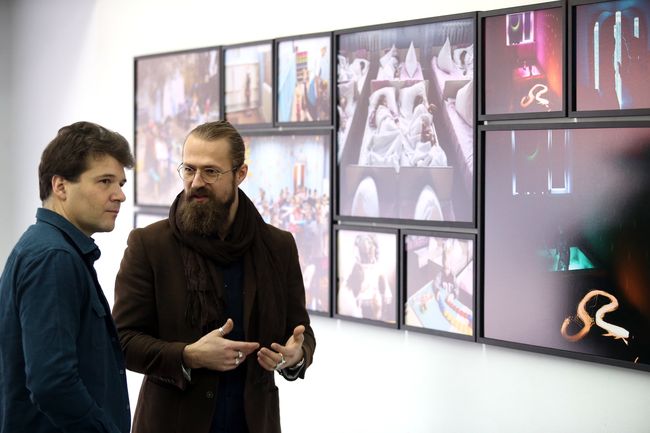 While having the displacement theme in common, the projects are very dissimilar. The seven series on display represent only a small part of the work done in recent years. The GIZ focuses on six areas: social and administrative services, education, healthcare, integration, civil society, and emergency management. Its efforts involve not only repairs and equipment purchases for relevant institutions, but also thematic seminars and training sessions for various social and professional groups.

In almost all their projects, German specialists have tried not only to help IDPs, but also to benefit the community that admitted them. Therefore, pictures tell not only about a hostel for IDPs, but also about a gym in a geriatric boarding house and training sessions for its staff, a mobile office for providing administrative services, new equipment for a hospital, a kindergarten and a fire department, and a training session for therapy dogs. All this is used also by local residents of small towns and villages, or even entire raions. In this way, important services become more accessible not only to IDPs, but also to other vulnerable groups – children, elderly people, and people with disabilities. In addition, positive changes in the community bring people together.

Through the “portals” on the walls, we feel like we are taking a peek into the everyday life of the subjects of the photo exhibition. Here are the rooms of the IDP hostel, which people try to make as comfortable as possible by hanging curtains, acquiring house plants, and covering the table with a beautiful tablecloth. Perhaps they took few belongings with them, but still managed to take the most valuable things – love of relatives, talents, and hope for the future. It flew through the corridors, absorbing a ball clattering about in table football, the sounds of a saxophone and children’s chatter, the rhythms of a sewing machine.

Beside portraits of dogs and photos depicting children sleeping peacefully in the kindergarten, one sees hard-hitting pictures of surgeries and people with amputated limbs. When asked how to avoid breaking down under the burden of another’s grief and pain having immersed oneself into the environment while taking pictures, Dondiuk answered: “Documentary photography is not just about photos, it requires a lot of communication. Sometimes you have to communicate with a person for two weeks to make a few shots. To get people open, it is necessary to empathize, be honest. But at the same time, you must remember that you have a life of your own, and keep the distance in order not to self-destroy.”

Dondiuk is convinced that one should not form a definite opinion on what emotion stands behind this or that image. Firstly, happiness is inside one’s mind, and people react in different ways to life circumstances. Secondly, at first glance, one will not know the context of the photo and the story of its subject. They may have gone through much worse misfortunes, learned to appreciate what they have, and therefore seem to be glad, despite experiencing conditions that seem to be far from the best.

Indeed, people depicted in Dondiuk’s photos keep up their spirits. Old men do sports on GIZ-installed exercise machines, while grandmothers drink tea from an authentic samovar. Some children develop their skills in a magic sensor room, while others help wonderful puppies to become respectable therapy dogs. People who seem to have lost everything get something new instead and find the strength to smile. Life goes on, so we still have a chance to change it for the better.

The exhibition will run until February 11. Entrance is free.