How sakura benefits the climate

On April 16, a festival will start to celebrate this unique natural phenomenon of Uzhhorod
Vasyl Ilnytsky

In recent years, this natural phenomenon of Uzhhorod has became the city’s main attraction in spring – the blossoming of sakura is a perfect background for open-air art, festivals, concerts, and videoclip filming. There is a full-scale pilgrimage of people who wish to enjoy the spring wonder, which puts an end to the grayness of winter. There is even an international festival Sakura Fest, which has been established in the recent years to celebrate the cherry blossom. This year, the festival will begin on April 16 and will last several days.

In the city, the Japanese cherry has been cultivated since the early 1920s, when it was brought on the banks of the Uzh as a decorative tree from Vienna. The Czech government was actively engaged in developing the Halahov neighborhood; the moorland conditions were unfavorable for many plants, thus they decided to bring sakura, which had well adapted to the mild Transcarpathian climate.

Later, it has become the favorite tree of the city’s residents, and now almost every corner of the city offers an opportunity to enjoy the delicate cherry blossoms. Most of these enchantingly beautiful trees are growing in the central part – on the Dovzhenko, Rakoczi, and Customs streets, as well as on the banks of the river Uzh. The Japanese cherry decorates a section of the Drugets Street; and young trees have recently “registered” in commuter neighborhoods – on the Hrushevsky, Zankovetska, Lehotsky, Chornovil streets and the Svobody Avenue.

The vogue for sakura spreads to private dwellings of the most practical citizens, ousting the traditionally cultivated apricots and peaches. Despite the fact that a sakura sapling is not cheap, costing from 300 to 600 hryvnias, there are more and more willing to buy one. In 2009 and 2011, avenues of sakura were planted on the Orthodox and the Kyiv riverfronts, and this alley is now considered the largest of its kind in Europe. This year’s Sakura Fest is going to have young trees planted on the territory of the Andrii Novak Regional Clinical Hospital. 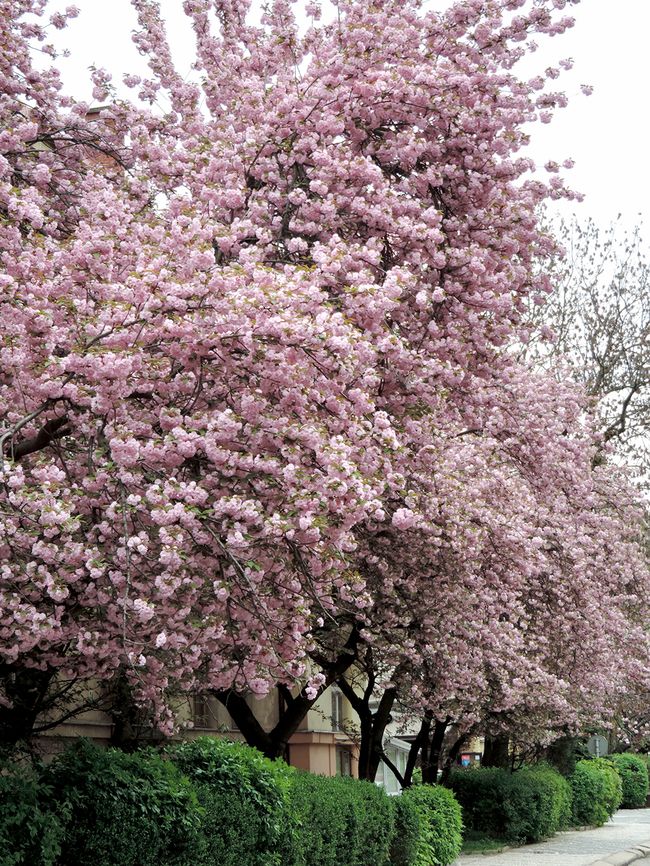 “Sakura has a positive impact on the city’s ecology: it improves moisture, reduces the overall temperature, catches dust, reduces fumes, and so on. However, because of the abundant flowering season, this tree has varying attractiveness depending on the season, and the climate change has a negative impact on planting,” said Oleh Kolesnyk, Ph.D. in biology, head of the Department of Botany at Uzhhorod National University. The professor underlines a lot of problems the trees have in the city: “Most of the trees have outlived their age (sakura is not particularly durable), and are in need of immediate replacement. In the years of independence, the city vegetation has been neglected, and the plan for gradual tree replacement has not been developed and implemented in time. As a result, the central streets of the city are getting rid of old emergency trees quickly, and it takes some time for the new ones to reach the appropriate size. Global warming worsens the situation as well – the sharp increase in spring temperatures dramatically reduces the trees’ flowering season and thereby their attractiveness. The image of Uzhhorod as the Sakura City has to be taken care of urgently: old sakura trees in poor state should be replaced by new ones as fast as possible (it is desirable to use large-sized saplings that will be able to perform their functions already in a couple of years). Also, sakura should be mixed with other trees, flowering period of which precedes or follows the cherry blossom – that would increase the overall attractiveness of the city’s green zones.”

The biologist advises against dwelling upon sakura exclusively. “The historic city center, which has become a showcase for sakura trees, should have other decorative greenery available, which would become a tourist highlight in other seasons. This is especially true as Uzhhorod has a long tradition of using exotic plants in the urban landscape,” Kolesnyk says. And that is true: almost simultaneously with the cherry blossom, other trees bloom in Uzhhorod. Among them are the pink, white, and purple magnolia, Japanese quince, Nedzvetsky apples, Florida and Chinese apples. Thanks to this, the ancient city on the westernmost piece of Ukrainian land has a unique aura of natural perfection and joy of knowing that spring has come and life is beautiful. And it is better to see it for yourself!