On display in Lviv are the treasures of the princely church of St. Nicholas
Yosyp Marukhniak

The exhibition “Treasures of the Princely Church of St. Nicholas in Lviv,” which opened at the Museum of the Religion History, presents old church books, liturgical implements, musical notes from the princely church of St. Nicholas. For the first time in several centuries, the museum visitors can see the restored sculptures of angels in Rococo style, from an altar or iconostasis dating back to the second half of the 18th century, which has not survived to our time; on display are also icons from the city’s oldest gonfalon from 1760s. These 18th-century wooden angel figures were found recently in the bell tower of the church. These unique examples of sacral wooden sculpture are compared with the best examples of this period, used in decoration of Ukrainian churches. Experts suggest that it may be a work of Pinsel or someone of his pupils.

“In general, there are not many known Ukrainian churches that have preserved Rococo and Baroque sculptures – the period of enthusiasm for borrowing the Latin ritual practice had been fairly brief and lasted only a few decades. Considering that from the iconostasis of the 18th century only one icon survived to our time – one of Virgin Hodegetria, restored by the efforts of priests and parish community in 2013 – the discovery of the sculptures is particularly important,” says Vasyl Kmet, researcher of the temple’s history, director of the Ivan Franko Lviv National University’s Scientific Library. 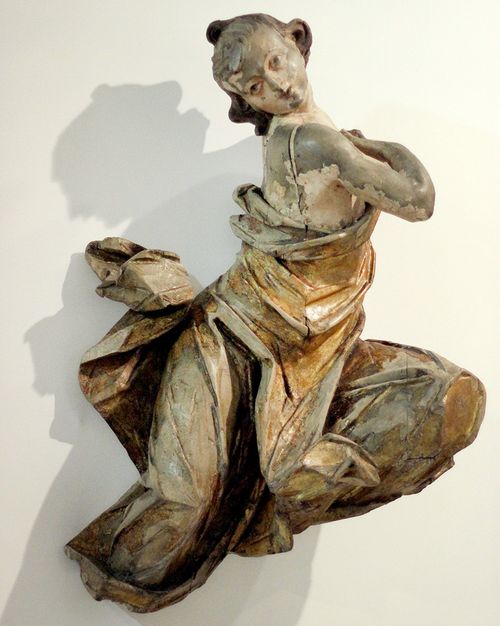 Today, the findings, well hidden in the bell tower for the past centuries, are exhibited for citizens of Lviv. The restoration work was performed by the Lviv branch of the National Restoration Research Center of Ukraine, headed by People’s Artist of Ukraine Myroslav Otkovych.

There is another item on display worth of a special attention: the icon of the oldest gonfalon from the temple of 1760. On one side of the banner is the image of St. Nicholas. This unique image, most likely, is a copy of the ancient temple icon, the original of which has not survived to our time.

The church of St. Nicholas is the oldest surviving church in Lviv. It was founded by Prince Danylo of Galicia, and the first written record dates back to 1292. Its main walls, erected more than eight centuries ago, have survived to this day.

The exhibition at the Museum of the Religion History will be open for a month, and then all the exhibits will be returned to the church of St. Nicholas.