“Ukraine has a great potential for the development of modern icon”

Young Lviv artist Ivanna Demchuk paints modern icons. The artist is only 26 years old, but she is already known abroad, while Ukrainian critics have called her a real discovery among young artists and predicted a successful future for her. I discussed with her the peculiar nature of creativity in icon-painting, this seemingly highly traditional form of art, its current trends as well as the master’s own works.

How did you come to be interested in painting?

“My interest in painting, and later specifically in icon-painting, came out of a desire for creative realization multiplied by a happy coincidence, an accident. I tend to think, however, that accidents are not really accidental. My parents are doctors, so they did not plan for me to become an artist, but they detected several diseases of the eye afflicting me from an early age (astigmatism, farsightedness). An ophthalmologist prescribed me an interesting kind of treatment: to increase the visual load in one eye, I had to obscure the other eye and then to do a lot of painting, sculpting, and coloring. From that time on, I attended children’s art clubs, an art school, took an interest in classic paintings. Then, I did not think that it would take me so far. However, the art world became a growing attraction for me, and I eventually entered Trush College of Arts. My parents respected my choices and tried to support me. Nonetheless, my mother, seeing art profession as too unreliable income-wise, always suggested that I get one more education, for example, in philology. She was like, ‘let the painting be your hobby, but it would be better to learn some more popular profession as well.’ Instead of taking up a popular profession after college, I decided to choose an even more narrow specialization by going into sacred art. It was quite a spontaneous decision, but I do not regret it at all. It was there that I first fell in love with classic icon-painting, and then its modern continuation, and realized that a lot of my creative activity were to be linked to it.”

“STICKING TO ALL THE RULES RESTRICTS ARTISTIC FREEDOM”

How would you describe your painting work: is it religion-themed painting or icon-painting? What do you see as the fundamental difference between the two?

“This is a debatable issue. I have some pictures made as paintings, and others as icons. These concepts are fundamentally different, and the differences are primarily technical in nature. The icon is created on a board covered with gesso and held together by wooden or iron bars. Meanwhile, the painting is usually done on the canvas using different techniques and paints. 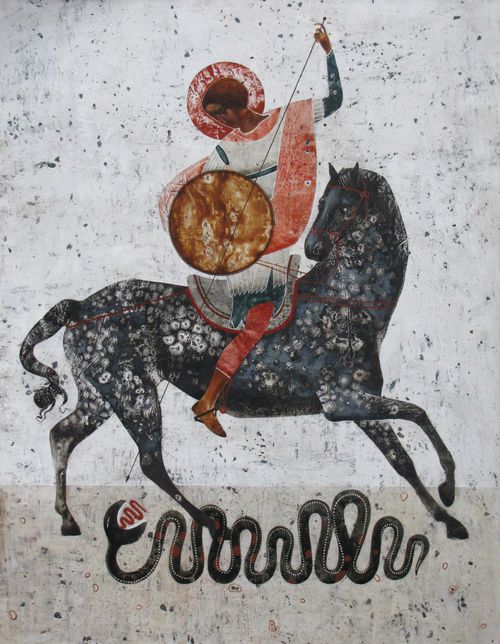 “I see the canon and style issues of icon-painting as more interesting and more controversial. This is what distinguishes the icon among other types of art. It has its stylistic peculiarities, such as reverse perspective and painting sequence from the darkest to the lightest. The artist starts with a dark background, gradually illuminating the faces and clothes of saints. Renowned theologian Pavel Florensky wrote that illumination in the icon reflected the theological idea of the light emerging in the dark. The icon painter may not do it in reverse. We often see people speculating on the canon, but true canons are actually few, and all of them were approved back at the Council in Trullo and the Second Council of Nicaea. Regulations came later, and some people treat them as canons as well. Athos monks wrote down the rules of icon-painting, known as erminia in Greek, in their notebooks. Subsequently, the monk Dionysius of Fourna published them in the form of a collection which contains a set of instructions on how the eyes should look like, what the structure of hair, facial proportions, color, look should be, etc. Sticking to all these rules restricts artistic freedom. In the end, it turns the artist into a copyist, reduced to replicating the same iconographic types. So I think we need to look for the golden mean in this regard.”

“They limit one a little in choosing the subject. However, these themes are close to my heart, as they often overlap with current pressing issues. As for figurative means (style, color), I prefer creative approaches and am totally free in my choices.”

“THE STORIES OF THE GOOD SAMARITAN AND ST. GEORGE ARE VERY TIMELY NOW”

How do you choose subjects for your icons?

“There is a certain line which I try to link many of them to. My concept deals with continuous repetition of phenomena in human history. Actually, in my opinion, the stories of the Good Samaritan and St. George, who was a defender and warrior, are very timely now. The evolution of human consciousness has not gone far enough to render us qualitatively different from people who lived two millennia ago. We are facing the same problems and issues, we may become traitors just as those who crucified Christ. 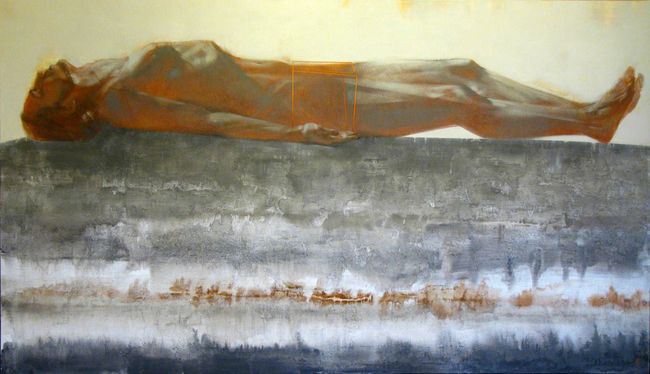 “My favorite story is ‘The Road to Emmaus.’ Christ appears to the disciples as a man, but they do not recognize him. How is this story close to modern people’s concerns? We sometimes fail to see God in those around us, the divine nature which is inherent in all of us.”

Most of your works have white background in common which is rather unusual for icons. What role does the color play in your work?

“All colors are figurative in the icon. They do not belong to the object or person in question, but rather reveal their theological significance. Most of my icons have white background in common since, observing the life of Christ and the saints, one wants to focus on the idea of simplicity, purity, and renunciation of earthly riches. It is very rarely that I use golden haloes or yellow background (such as in the icon Christ in Glory). There is one icon on black background as well, entitled Mourning for Christ. The icon was painted at an open air icon-painting session in Zamlynnia in July 2014 , and I did not initially plan for it to use this dramatic coloring, but the downing of a Boeing 777 near Donetsk happened just then, on July 17. It shows the Mother of God with bloodshot eyes, while the bright-blue emphasis of her tunic symbolizes the sky.

“Instead of golden halos, I often use purple ones, serving as symbols of royal or divine authority, or red ones, signifying life, victory over death, martyrdom and Christ’s sacrifice.”

“WHEN TRAGIC EVENTS SURROUND THE ARTIST, DRAMATIC FEATURES EMERGE IN COLOR AND STYLE AS WELL”

How much was your style influenced by the Ukrainian icon-painting tradition? What features of the Ukrainian school do you share most?

“The Ukrainian art in general is a great source of inspiration. I like ancient Ukrainian icons, such as The Golden-Haired Angel or The Annunciation of Ustyug. But it is only sometimes that I feel I can borrow something from them. Visually, my icons are unlike these, only the emotional component is similar.

“I am inspired by the icons of Fedir Senkovych and Ivan Rutkovych, painted at the end of the Ukrainian Renaissance and in the Baroque era. They were introducing interesting experiments to the iconostasis, including what were modern elements at the time, I mean landscapes, buildings, clothes. Rutkovych’s The Road to Emmaus, for example, looks unusual. The two apostles are depicted as travelers in modern clothes. It was quite revolutionary, as if we portrayed them wearing business suits these days. This leads me to think about what an icon should be. What are the objectives it pursues? How important is its natural link with the prototype? Can it involve a bit of subjectivity that will help people rethink something, perhaps bring the icon closer to modern people?”

How much is your creative work a reflection of current events?

“They are reflected in my quest for subjects. I started to feel the Passion theme better when the Euromaidan and subsequent events took place. It brought a deeper understanding of how to depict these scenes, because during such events, the artist attains the appropriate attitude. It was during that period that I wrote icons St. George Slaying the Dragon, The Crucifixion, and The Shroud. I already have a certain style, and my choice of figurative techniques suits it. These techniques allow me to show more positive stories as well as the Passion theme. When tragic events surround the artist, dramatic features emerge in color and style as well, and people feel it when contemplating these icons.”

What are the current trends in icon-painting, particularly in Ukraine?

“Classic examples of icon-painting are more prevalent globally. However, we see examples of icon-painting development taking modern directions as well, mostly in Poland and sometimes in Russia too. We have a joint Ukrainian-Polish open-air event in Nowica where artists can share their experiences. From my observations, the most fertile soil for experimentation is emerging precisely in Ukraine. There are interesting icons of folk direction, which are modernized, but inspired by the unique aesthetics of images created by folk masters, often semi-professionals. Certain painters’ liking for the neo-Byzantine style is evident, others are influenced by the folk icon, while some introduce Gothic elements and colors that look particularly interesting in a modern interpretation, and many painters follow the principles of minimalist aesthetics.

“Ukraine has a great potential for the development of modern icon. It is unknown whether other countries will accept modern icon-painting and how much of interest they will take in it. It may well happen in Poland, France, and other European countries. If the development of the icon in a modern direction takes place here, it is not by chance, and there will be some demand for it.

“Of course, there are some opportunities abroad. But now, with the development of the Internet, the art of Ukrainian painters can be promoted abroad without them necessarily leaving Ukraine. I have participated in exhibitions in Poland and Belarus. The Iconart Gallery in Lviv takes care of many artists who work in sacred art, including by organizing an exhibition in New York, where some of my works were displayed. Also, my icons have been bought by private collectors from France, Canada, the US, and Switzerland.”